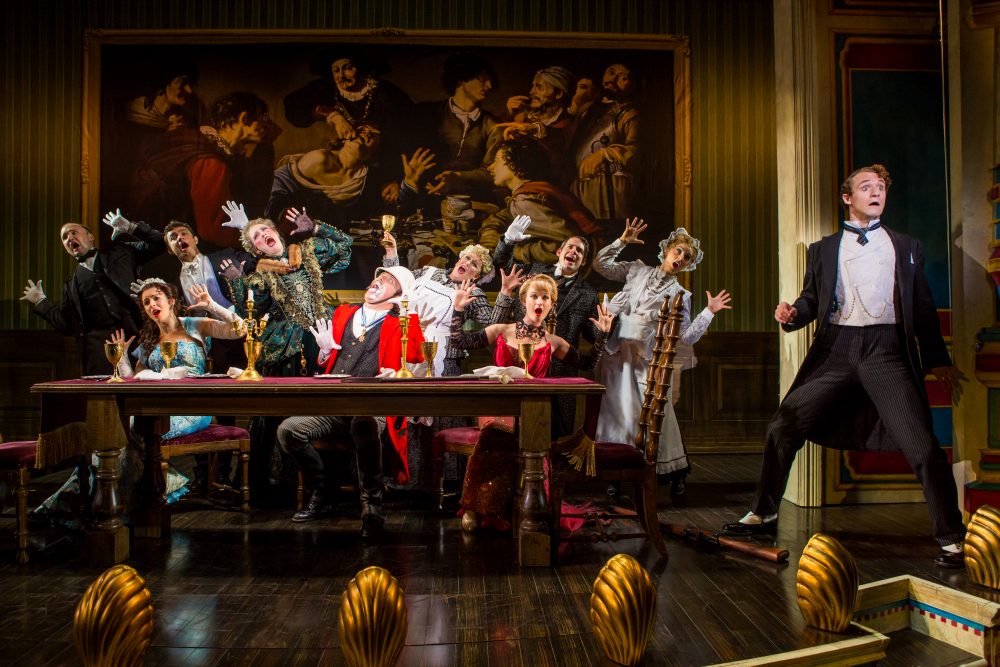 Hey all you fans of Free Fun in Austin! Our favorite stage series, Broadway in Austin, has another Tony-winning production opening in town soon and we have a pair of opening-night tickets to give away. Make sure to scroll to the bottom of this article for your chance to win!

The cast with James Taylor Odom as Lord Adalbert D’Ysquith (red) and Blake Price (far right) as Monty Navarro in a scene from “A Gentleman’s Guide to Love & Murder.” Photo credit: Joan Marcus.

“Gentleman’s Guide” tells the tale of the penniless Monty Navarro, who stands to inherit a fortune from his family — if only it weren’t for his family standing in the way. In order to win the heart of his beloved, Monty begins bumping off his family members one by one in the most hilarious ways.

When this show opened on Broadway, leading to four Tony awards including Best Musical, critics called it “dazzling,” “ingenious,” and “glorious.” Charles Isherwood, writing for The New York Times, said this play “ranks among the most inspired and entertaining new musical comedies I’ve seen in years,” and called it “like Sweeney Todd as refashioned by P. G. Wodehouse.” 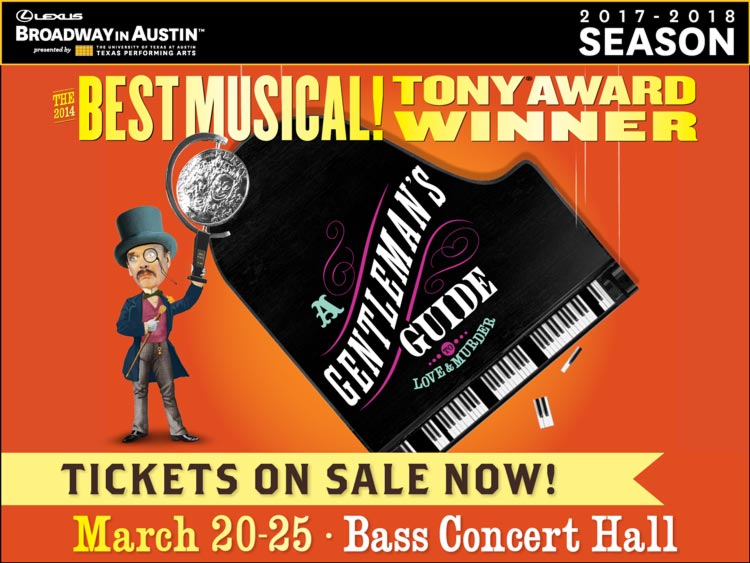 Actress Erin McIntyre, an actress in the Austin cast of “Gentleman’s Guide,” took the time to answer a few questions about her involvement with the show…

The show tells the story of the penniless Monty Navarro, he finds out he’s 8th in line to the gigantic Dysquith family fortune. Only problem there’s 8 family members in the way. After the family rejects him, he decides to start bumping them off in hilarious ways. Intertwining with a scandalous love triangle. Our cast gets on ridiculously well, I adore them all. Colleen Mclaughlin and I are joined at the hip! I couldn’t ask to be in a better company.

Anyone that wants to have a fun night out. It’s such an enjoyable show, there really is something for everyone, romance, intrigue and absolute hilarity. Not to mention stunning ‘Tony award’ winning costumes, they’re a site to be seen. Robert L Freedman is such a fantastic writer, he’ll have you laughing all night long.

Beauty and the Beast I saw it in Australia when I was 7 years old and I was mesmerized! I knew I wanted to perform but I was too shy until, I got the lead in Oklahoma when I was 15. Once I got a taste of performing and the feeling it gave me. I knew there was no other path for me.

Audra Mcdonald she’s heavenly to watch. One of the most beautiful voices I’ve ever heard. She’s so inspiring!

I’m quite the foodie and I hear Austin has wonderful food, I’m highly looking forward to that and exploring downtown!

“A Gentleman’s Guide To Love & Murder” starts on Tuesday, March 20, and you won’t want to miss this! Enter to win your tickets below!