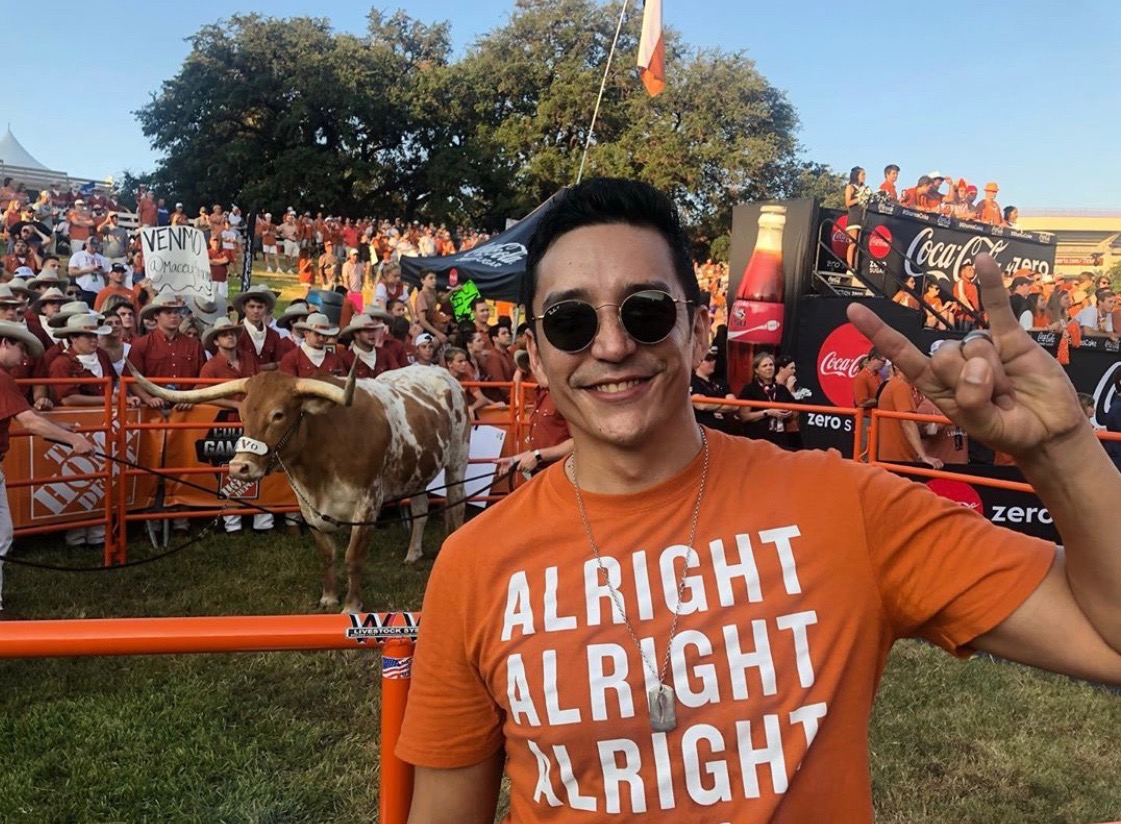 Gabriel Luna may be making his mark on Hollywood but the actor has not forgotten his Austin roots.

After the LA premiere of Terminator: Dark Fate was cancelled due to wildfires, Luna got to screen the blockbuster at what he called “the real premiere” right here in Austin.

Friends and family of the star packed into the Alamo Drafthouse Slaughter theater, which currently features a Terminator themed mural on the side of the building, for a screening of the newest film in the Terminator franchise.

Robert Rodriguez was also in attendance to greet guests and host a Q&A with Luna following the film. Rodriguez cast Luna in the TV series “Matador” which aired on the El Rey Network in 2014.

The director told a story about visiting set with James Cameron when he was filming T2 and called it “mindblowing,” but went on to say, “This guy topped that experience, Mr. Gabe Luna, because he gets to be the latino Terminator.”

But that’s not the only person on hand who played a role in helping Luna hone his acting chops. Melba Martinez, artistic director at St. Eds University, was also in the audience.

The next morning, we sat down with Luna to chat about the role she played in encouraging his acting future.

“I was in a play with her daughter in our high school, David Crockett High School (Go Cougs!),” he explained. “She came to our play and saw some promise and offered me a full scholarship to go to St. Edwards to be an actor.”

He had never considered acting before as he was an athlete (his former coach John Waugh was also at the event). After dislocating his shoulder, he pivoted and started doing theater though he never thought he’d keep doing it.

Because Martinez offered him the scholarship, he attended St. Ed’s to study acting and, as he says, “I just kept rolling and here I am.”

Of course, we couldn’t let him go without chatting about his Austin faves.

Must have food when he gets back to Austin? A good breakfast taco because they only do breakfast burritos in LA.

On this particular trip he was also craving barbecue. Somebody sure knew what they were doing because they took him down to Valentina’s Tex Mex BBQ.

“I think they’re taking their rightful place as one of the top spots,” Luna said of Valentina’s.

Since he’s pals with Gary Clark Jr., as well as the other owners of the famed music club, it’s not surprise he refers to Antone’s as “kind of home base for us.”

We closed things out by asking what movie or TV show makes him think of Austin.

After mentioning Texas Chainsaw Massacre, and everything Rodriguez has shot here in town, he settled on Richard Linklater’s classic Dazed and Confused.

“It was shot at my middle school, Bedichek Middle School, which is incredible because that Uncle Sam that has the blood shot eyes… that’s still there!,” he informed us. “And they always paint him over but generations later kids still go back in and paint them (bloodshot eyes) back in.”

Want to read more about Austin celebrities?
Check out these posts: