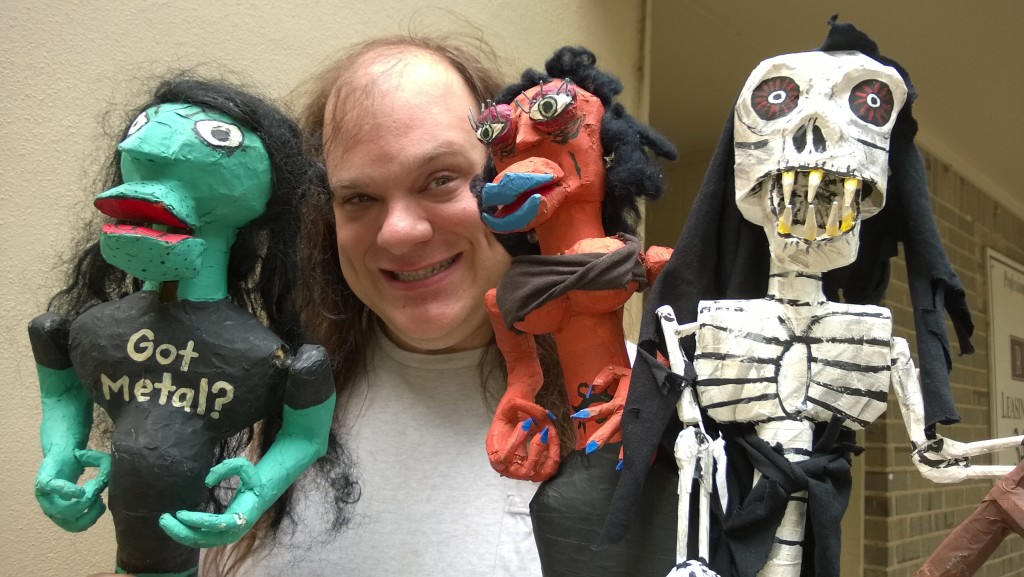 Meet The Weirdo Behind Those Bizarre Channel Austin Puppet Shows

Everyone is familiar with our slogan, “Keep Austin Weird.” I’m even willing to bet that everybody reading this knows somebody who qualifies. That’s just the way it goes in our creative city.

I’ve come to know a lot of interesting folks in my time here, and Ross Wilsey is one of those people. Like me, he’s predominantly known for his work on Channel Austin, our public access television station. If you’ve ever randomly stumbled across the strangest puppet show ever while watching late night TV, then you too have been touched by Wilsey. He’s a true Austin weirdo who has been here long enough to remember what it was like in the “good old bad days of Austin,” even though he’s originally from from Michigan. You are reading “Arcie’s Austin,” a blog by the one and only Arcie Cola. Photo by Erica Nix.

Wilsey is the brains behind “The Church of PuppeTose,” an expansive universe of puppetry infused with his dark sense of humor and crude style. He was also behind “Mystic Kids Fun Time,” featuring “the Mystic Guru,” that was a long-running public access staple here in Austin and decidedly not for kids. He’s also presented short films at the SXSW Film Festival and his near-feature length puppet odyssey, “Valley of The Robots,” screened at the Ritz. He’s come up with some hilariously freaky stuff and he shows no signs of stopping the crazy train.

Wilsey’s latest project is “PuppeTose Street,” a rude satire poking fun at traditional sitcoms. Using his trademark puppets, Wilsey creates a depraved, Austin-slacker world; where morals are non-existent, and every character is outrageously absurd and obscene. As Wilsey explains, “It’s a nostalgic throwback to reckless youth.”

It’s fitting that the name Wilsey gives to his puppet empire — PuppeTose — is inspired by a G.G. Allin tattoo of the word “Vomitose.” He explained: “I thought it was awesome that [Allin] would be so wasted as to let somebody tattoo that word on him. In the same way, I hope when people see my stuff, they’re so wasted they don’t bother to change the channel.”

Wilsey’s art is infused with his uniquely grotesque perspective. As he puts it, “I’m a huge believer in catharsis. I think your art should be ugly. You should expel your bad thoughts through art so they don’t show up in real life.”

What do you enjoy about living in Austin?

I enjoy living here because the tentacles of the Earth squid wrap me tight in a suffocating embrace. Here I am one of hundreds of crazies and they will probably catch one of them first and send them back to Yondo.

What do you find challenging about living in Austin?

The endless growth. People ruin what is cool and replace it with what is corporate. If we wanted to live in fucking Dallas we would.

When did you start building puppets?

I didn’t start building puppets until 1995. I was working as a fax machine refurbisher and found a bag of tension springs. I felt suicidally low and loved the Godlike artifice of it. Scrapping common sense I decided to do a public access show and share my sickness with everybody else. The stars of PuppeTose Street… On their day off.

What is it about building puppets that appeals to you?

I enjoy spacing out into the forever of endless tasks. To think “ya that’ll show em”, even when I’m all alone.

How do you build your puppets?

They are Austin Chronicles and masking tape. I use only the cheapest of ingredients to cook this mindwash stew. I try to keep the show budget around $10.

What is your favorite PuppeTose moment?

My favorite moment is when anybody remembers me and the show at all. I sometimes think I am dissolving, turning invisible, and it helps me stay tied to this rotten planet. Otherwise I might fall straight up into the sky.

Who is the typical PuppeTose fan?

I think the typical PuppeTose fan is a hilariously dissatisfied individual who craves an idealized past and struggles with a lack of future doings. A nihilist stooge hoping for an end to all of “This,” and hopes for the collapse of institutions and incorrect belief cycles related to a wheel of time.

Where do you see PuppeTose in 5 years?

I see PuppeTose being the biggest hit ever in 5 years, but I have been saying that for some time. Hopefully some kind of sex cult couldn’t hurt either. Barring that, all the puppets coming to life to eat me alive, and unleash blasphemy on the world of the content and sane!

To see the first episode of PuppeTose Street, if you dare, click play below. And in case it wasn’t clear already, this is definitely weird and NSFW.

Other products of Wilsey’s fruitful imagination can be found on YouTube (also totally NSFW). Of course, PuppeTose is also on Twitter and Facebook, if you want to find out what Wilsey is up to next.
——