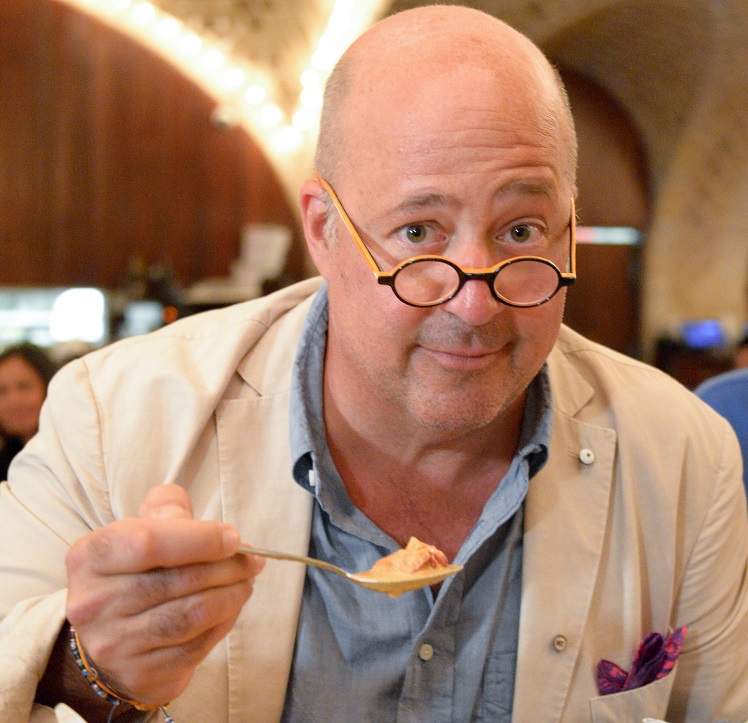 Andrew Zimmern has a new show that lets him gallivant around the world putting all manner of foods in his face and excitedly talk about it. “The Zimmern List” premieres on the Travel Channel March 13, 2018 with two episodes, one in LA and one in Austin.

The concept of the show is simple enough: “wherever I go, I have a list of the places I love to eat,” Zimmern narrates over him happily biting into a Fresa’s chicken leg. The episode opens with your standard shot of musicians, food, and Zimmern narrating as he walks down 6th St. Sweeping shots of downtown, Lady Bird Lake, and the star in front of Bob Bullock Texas State History museum all follow. And then comes the food.

You get some of what you’d expect, a whole lot of Franklin’s brisket and tacos (though some will find his choice for “best tacos in Austin” as questionable at best), a variety of food from food trucks, and some of the newer takes on Texas cuisine. From the chicken to the brisket to the Ramen Tatsuya tonkotsu broth, viewers get a picture of the time and patience that it takes to create really good food, as well as the combination of things that help to make Austin a food destination. He specifically emphasizes Austin as a place full of creatives who bring their own takes on the culinary world. Naturally, it also includes connections between music and food, as well.

There’s no blood, balls, and brains like his “Bizarre Foods” episode in Austin, and in all, there’s not too much new to his take on Austin over anyone else’s. However, seeing Zimmern’s genuine joy for Austin’s people, culture, and most of all food, is enough to put a smile on your face. That and his adorably awkwardly placed round glasses. And if nothing else, it’s motivation to get you out of the house, because it will cause some serious food cravings for some of Austin’s amazing food.