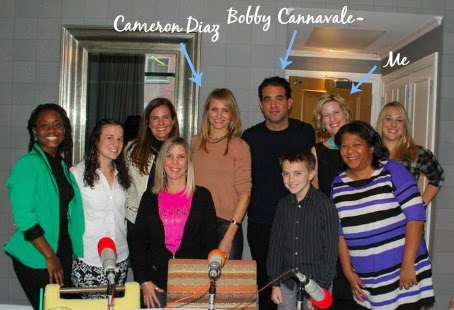 In an unusual is-this-really-my-life moment, I sat down for a roundtable interview with Cameron Diaz and Bobby Cannavale during the recent Annie press junket in New York City. Having seen Annie the night before, I was eager to hear the actors’ thoughts on being cast in a musical.

Both Diaz, who plays Annie’s foster mother Miss Hannigan in the movie, and Cannavale, who plays Guy, a scheming political campaign advisor, led the discussion by talking about challenges they had to overcome during filming.

Asked about how comfortable she felt with the dance numbers in the movie, Diaz answered, “I pretty much dance in a quarter of the films I’ve ever done. Dancing is my thing. But singing is not my forte. So who knew I could sing?  I had a group, an army of professionals, a village of professionals, teachers and you know, musical professionals that helped me get to the place that was acceptable.”

Cannavale was quick to correct, “Better than acceptable, I’d say.” He then added, “I’m not very confident when I’m dancing…. When I’m dancing, I’m very self-conscious and I find it very difficult.”

Bringing up another hurdle, Diaz described how she had to put aside what she knew of the original Miss Hannigan, played by Carol Burnett in the 1982 film, to develop a new character. “I feel like this movie is just a different movie…. You know what I mean? I was doing this performance of Hannigan for the generation that this movie was made for.  This movie is going to be a certain generation’s only Annie. They’re not going to ever watch the original Annie. They’re never going to be comparing the way that we all are because we saw the original when we were their age. I was doing that performance for those kids.  The fact that her name is Miss Hannigan is for the people who saw the original so you can identify who she is.  I would never want to mimic someone’s performance or try to outdo it, I just wanted to create my own Hannigan.”

She went on to explain about her character, “She is a woman who is trying to validate herself through fame and celebrity which is I think an epidemic in our society. You know, kids these days sit all day long and go, ‘How many likes do I have? How many followers do I have?’ And that validates whether or not they are worthy of being loved or if they are seen by as many people as possible.  That’s I think what is a really big problem.”

Diaz has been saying for years that the internet is dangerous, so I wondered what she thought about a key scene in Annie, where kids post photos to Twitter and Instagram.

When asked about kids’ use of social media today Cannavale, who has a 19-year-old son, quipped, “It ain’t goin’ anywhere.” But Diaz gave a more elaborate response. “I want to remind people that social media is a choice. You don’t have to do it just ’cause it exists. You don’t have to allow your children to do it just because other kids do it.  I think that it’s something that’s really dangerous. I think it’s something that kids don’t know how to handle. They already have enough coming at them, but to be put in a position where they have to manage all these other people who are trying to manage their emotions. I think it’s insane. I think it’s insane.  It drives me nuts that kids are having to take this on in their young lives. I think it’s terrible.  This is so dangerous. There is so much negativity coming at you. There are so many kids trying to validate themselves through how many likes they have.”

Diaz is not a parent, but was quite passionate as she discussed her worries about her nieces’ online activity. I appreciated her candor on the subject, especially as her opinion doesn’t quite align with the choice to have kids interacting online in the movie.  I’d be interested to hear your thoughts on the part social media plays in the movie Annie after you see it.

Stay tuned for notes from one more roundtable interview with Jamie Foxx, Quvenzhané Wallis, and director Will Gluck. To read more about the movie Annie, head over here.

These are the things that make the iHeartCountry Festival so ATX-tra special.