Thinking About Proposing? Consider These Romantic Places In Austin

Lots and lots of people pop the question in Austin. Naturally, every Austinite hearing wedding bells in their head deserves a very Austin proposal, so we’re not going to give you the same ‘ole patio bars or restaurants you’ve seen listed here before. No, for this guide we’re keeping it classically Austin and counting down some of the most romantic locations around town for any wedding proposal.

So as you’re browsing diamond rings and sketching out what you’re going to say, consider one of these settings…

Stroll through the paths with peacocks and peahens as you admire the natural beauty of this west Austin preserve that seems more like a country hideaway than an urban park. Upon her death in 1971, Mary Mayfield Gutsch gifted the cottage and 23 acres to the City of Austin to be used as a park. Her father, Allison Mayfield, purchased the property in 1909 for his family as a summer and weekend retreat, so it makes sense the place feels like a small country estate.

While many places in Austin are at their peak of beauty just before dusk, Mayfield Park is best experienced in the sunshine. The sun sparkles off the ponds, and the birds strut around the grounds. Besides, silhouettes of giant birds sitting in the trees is a little creepy once the sun goes down. 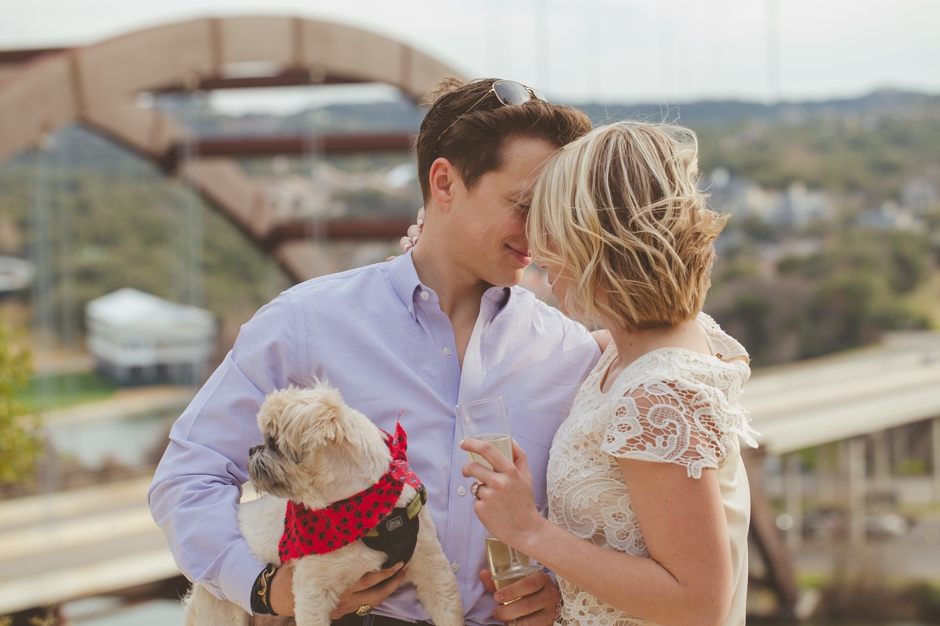 While the Congress Avenue bridge has bats and a view of the Capitol building, it doesn’t have the elevation and picturesque views of the Pennybacker Bridge on Loop 360. From the overlook above the bridge, you can take in vistas of the graceful bend of the Colorado River, the manicured fairways of Austin Country Club, and the hills of west Austin foreshadowing the terrain that lies beyond for hundreds of miles.

This is a perfect proposal spot. Just last year, Amanda Pomilla Photography captured Scott Stirdivant’s surprise proposal to his now wife Heather with their dog Milton in tow. As you can tell from the photos above, she said “Yes!”

Road to the wedding is so much easier when your best friend is the one riding with you! #ten26thirteen

The Capitol has plenty of things going for it when it comes to marriage proposals — iconic architecture, ample grounds with large trees and lawns, walking paths, and plenty of hiding spots for a photographer. Plus, you can go inside if the weather turns bad and still have a beautiful backdrop for the event including grand staircases, historic artwork, and the rotunda.

You’re My Butter Half Mural

Austin is full of public art, but nothing says marriage proposal like the You’re My Butter Half mural. The surrounding area at East Martin Luther King Boulevard at Alamo Street isn’t particularly romantic, but the sentiment of the mural makes up for it. Plus, there is plenty of lawn leading up to the mural to allow for taking pictures.

You could also try the “i love you so much” mural on Congress Avenue, but there is so much foot traffic and people trying to snap their pictures with the mural, you and your honey might feel too rushed. And maybe you don’t want to share your engagement with scores of people right as it happens.

Rang in the new year yesterday by taking pictures of this beautiful proposal!!! All the happy and smiles and joy, congratulations Kristen and Connor!!!

Did you and your special someone graduate from the University of Texas? Do you think the football team should be undefeated every year? Well, the perfect Austin marriage proposal location for you might be Littlefield Fountain.

This shining jewel of every television commercial promoting the University of Texas captures the institution’s pride and austerity. And with the water flowing and splashing, it makes for a true Longhorn setting without feeling like you’re drowning in burnt orange. And every time they light the tower orange, you can remember the day you got engaged.