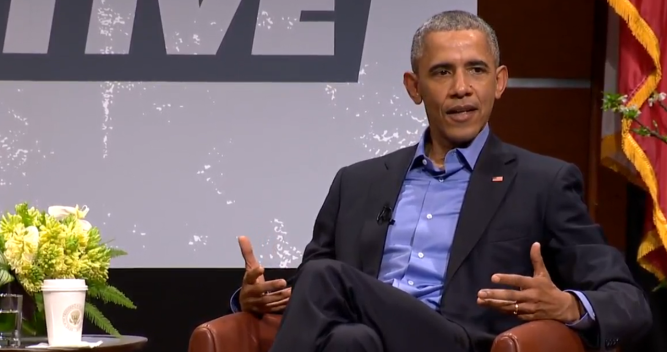 With clear smiles and a full belly (full of Torchy’s Tacos), President Barack Obama took the stage at The Long Center today to engage in a SXSW discussion with The Texas Tribune’s Evan Smith. In one of the most tumultuous presidential election seasons in history, Obama lamented about the United States’ low voter turnout, and Texas’s low turnout, specifically: “We’re the only advanced democracy in the world that makes it harder for people to vote…It’s sad. We take pride in the fact that we are the world’s oldest continuous democracy, and yet we systematically put up barriers and make it as hard as possible for our citizens to vote.”

He then took the opportunity from Smith’s comment that he’s in the state with the worst voter turnout in the country to take some shots at the Texas government for not allowing online voter registration: “It’s not insecure, it’s done because the folks who are currently governing the good state of Texas aren’t interested in participating more people participate,” which was met with great applause from the audience.

There were plenty of positives, though. Like a good politician/rock star, his first words as he took the stage included how much he loves Austin and how good it is to be back. He shared his appreciation for our tacos, our mayor, and for the Chancellor of the University of Texas system, William McRaven, who Obama said is one of his favorite people and a “truly great American.”

The majority of his speech discussed using technology, social media, and big data to solve the country’s problems, highlighting the convergence of the private, nonprofit, and government sectors to do so. Of course, citizens must do their part to help affect change. As Obama said, “The most important office in a democracy is the office of citizen.”

“The reason that I am here, really, is to recruit all of you. It’s to say to you as I’m about to leave office ‘how can we start coming up with new platforms, new ideas, new approaches across disciplines and across skill sets to solve some of the big problems that we’re facing today.’”

Highlights of the remainder of the speech included his poking fun of the Affordable Care Act website’s failings, saying it was embarrassing for him as the “cool, early adopter President.” The importance of the government to recruit top tier tech talent to improve their systems to help with a variety of issues was also a big topic.

The last ten minutes were supposed to be for questions from the public, but a question about the privacy vs security debate which led him to passionately discuss Edward Snowden and pop culture’s portrayal of the government, among many other things. Smith’s attempt to wrap up the panel led to Obama proclaiming, “I’m the President, so I’m gonna take one more minute.”

He used that last minute (well, more like three or four minutes) to implore everyone to plug into what the government is doing to help bridge the digital gap and become active in participating in change. He foreshadowed the days when he is no longer the leader of the United States, saying that he won’t stop fighting for the things that he cares about once that day comes: “I’ll be sitting in the audience with you, and I expect you to step up and get involved, because this country needs you.”

UPDATE: Watch the full presentation below. Obama’s talk begins at the 39-minute marker.