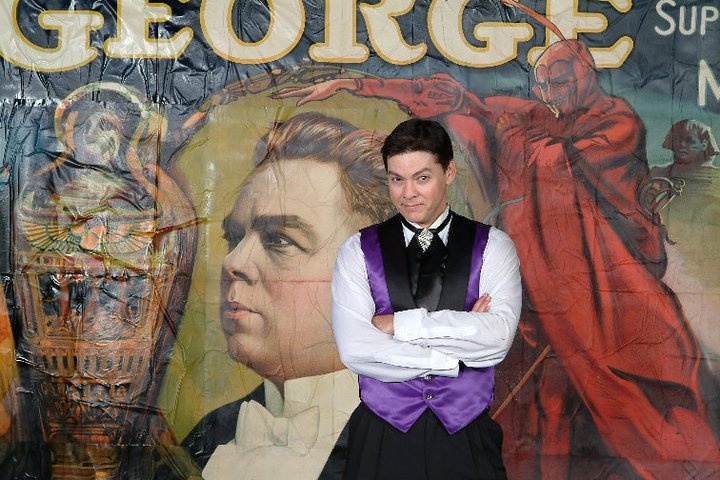 Meet The Austinite Behind The Legendary Magic Shows At Esther’s Follies!

Austin counts many magical people among its citizenry, but perhaps none is more magical than Ray Anderson. This hilarious magician has been putting the “awe” in Austin for decades and he’s as charming as ever. Catching his act at Esther’s Follies is a rite of passage for residents of this fair city.

Anderson discovered his passion at the age of eight, while growing up in Victoria, TX. He was gifted a magic set and was immediately hooked. “I was one of those lucky people who found what they loved early on,” he says.

Undeterred by the fact that his small town had no one to teach him the tricks of the trade, he taught himself by reading books, practicing, and performing at kid’s parties. His dream of becoming a professional magician brought him to Austin, where he studied theater and dance at UT. Anderson continued to perform magic around town as a way to put himself through school. A friend turned him on to 6th Street’s popular comedy variety show, Esther’s Follies, and he liked what he saw. He joined the troupe and has been a regular part of the spectacle for thirty years.

“I immediately fell in love with what it was all about and never looked back,” he says of the Austin institution. “I think watching these big illusions on a smaller stage with the audience so close is such an interesting experience.”

In addition to magic, Anderson spent a good chunk of the 80’s doing stand-up comedy, and lived on the East coast for a while. But he frequently returned to Austin for shows, and eventually decided to settle here for good.

Besides creating captivating–and sometimes bawdy–magic acts for Esther’s Follies, Anderson also serves as the troupe’s director and choreographer. Any given show will include several of his signature acts, and they are definite highlights.

“I try to add at least one or two new pieces every year,” he said, “but it might take upwards of eight months before a new illusion comes together and gets worked into the show.”

“Torched” is the latest addition to Anderson’s repertoire, and perhaps his most dangerous. He emphasized, “It’s a very hard illusion to do up close, and also I’m able to get my partner way up high, like eight or nine feet in the air, which is difficult to do on our stage.”

Of course Anderson has experienced his fair share of stage mishaps, but thankfully nothing catastrophic. He explained that the illusions are rigorously rehearsed, and credits his cast with always being on top of their game.

“I’ve had a few times when I’ve levitated girls and couldn’t get them back down,” he laughed. “But I think the thing that I most remember is ripping my britches without having any underwear on! It was in the back, and of course I had my butt to the audience when it happened, but it wasn’t the full on Lenny Kravitz.”

Anderson doesn’t find it difficult to stay engaged with the same format year after year, because the comedy is topical and always changing. “If Donald Trump does something stupid in the news, we’re writing about it on a Tuesday and it will be in the show on Thursday.” He added, “I like doing the really beautiful, fun, romantic stuff, but getting laughs is my favorite thing. I always want to make sure that the funny stuff I do is just as funny as anything else in the show. I’m addicted to laughter–and it’s great for misdirection!”

When he has time, Anderson enjoys being a mentor, and is happy to work with young magicians. “I always say life is too short to watch bad magic,” he admits, ”but if it’s kids it’s completely different. I love watching kids do magic! I’m just so fascinated even when they’re still learning.”

With his long tenure in Austin, Anderson is well aware of the changes to his home base. But instead of being annoyed by the city’s rapid growth, he maintains a positive attitude. As he puts it, “I understand that things change and you can’t do anything about it, so I embrace the changes.”

Anderson has even jumped on the urban living bandwagon, recently trading his West Austin home for condo in the city center. “Austin is just so vibrant there’s always something going on downtown. Everything is within walking distance which is very nice.”

Although he could have a successful career in a bigger city, Anderson can’t imagine performing anywhere but Austin. His reputation and longevity in the business are a testament to his talent, and magicians come from all over to see his act.

“Austin is the coolest city I’ve ever been in! I love Austin and I don’t want to live anywhere else,” he proclaims. And if decades of sold out shows are any kind of testament, Austin loves Ray Anderson too.

Watch this video for a taste of Anderson’s many talents…