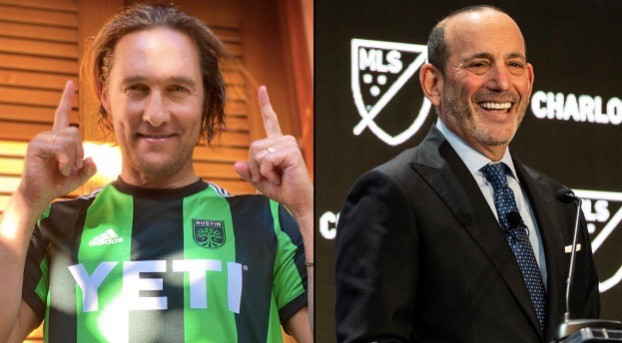 Matthew McConaughey Predicts Austin Soccer Will Bring the City Together

Austin’s most well-known spokesperson and possible future gubernatorial candidate Matthew McConaughey sat down with MLS Commissioner Don Garber to talk about Austin soccer, the changing landscape of the sport, and how Austin FC will play a role in the sport’s rising popularity in America.

MLS features the youngest, most diverse, millennial, and tech-forward fan base of any North American sport. During the past quarter century, MLS has changed the North American soccer landscape with new markets, state-of-the-art soccer stadiums and content connecting with millennial and Gen Z fans. The League continues to push what it means to be at the intersection of sports and culture. In this session, MLS Commissioner, Don Garber, and Austin FC’s Minister of Culture and part-owner, Matthew McConaughey, will discuss how the League is deepening fan engagement, and how Clubs are becoming cultural mainstays. #SoccerCulture

This session was about much more than soccer. McConaughey spoke at length about the identity of Austin.

When asked why he chose to invest in Austin FC, McConaughey said that he’s currently looking for “legacy choices” in his life. The Minister of Culture wants to invest in things that will not just last through the next year or the next 10 years, but hopefully become something he can pass on to future generations.

He’s got big aspirations for that connection.

My hope is that if you take a snapshot of the stadium – when you zoom in, it should look like all the rich and diverse pieces of Austin in one stadium. Now we’re creating a destination for all the different communities in Austin to come together.

We’ll have to wait and see if that image becomes reality when Austin FC hosts their home opener sometime this summer.