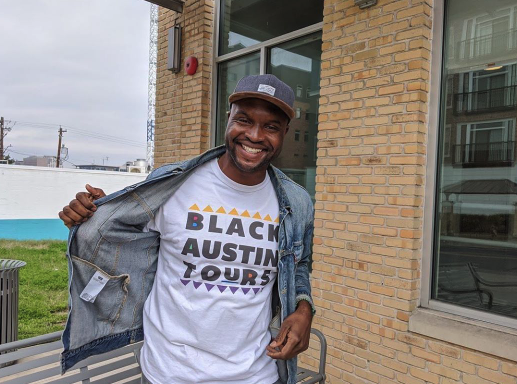 Learn About Black History In Austin With Black Austin Tours

Javier Wallace, founder and owner of Black Austin Tours, graciously let me interview him over FaceTime about his business and how it’s affecting the Black Lives Matter movement in Austin. As Javier ended his busy day on UT’s campus, where he is studying for his PHD, we chatted about the importance of Black Austin Tours, what his business is doing for the city of Austin, and the Black Lives Matter Movement.

Here’s how Black Austin Tours came to be:

Javier started Black Austin Tours in the summer of 2019. He had just moved back to Austin from Panama, where he created a similar business model in 2015, AfroLatino Travel. When Javier returned to Austin, he found that there was no focus on Black experience nor tours in the city. He started the tour as an AirBnb walking experience in hopes to “lead people back to Black contribution in Austin.”

Learn more about the inspiration behind Black Austin Tours:

Javier is born and raised in Austin, Texas. He told me his mom’s family has lived in the state for 200 years. He was inspired to start Black Austin Tours to not only represent where he’s from and give credit to his family, but to show guests that every place in Austin has Black history — each street, building, and area of town. Javier told me that he “wanted to dispel myths about East Austin, for being a gritty part of town,” because he felt that “the way it’s being described is inappropriate.” With Black Austin Tours, Javier wants to share the experiences of how Austin became the way that it is today, and share the experiences of the people that built the city.

Here are some of Javier’s favorite places on the tour:

Javier chuckled when I asked this question because he said he gets it all the time. He said he has two favorite stops on his tours. The first is Wesley United Methodist Church off San Bernard Street in Central East Austin. This is one of Javier’s favorite stops because outside the church, they have a sign that talks about lynching in Austin. He said, “for me, it’s so ironic. We think of Austin as such a liberal, accepting place. But this sign is challenging to see a story about someone’s life that was violently taken from them at the purveyors of the law.”

Javier’s second favorite stop is the Dedrick Hamilton House, off East 11th Street. In 1892, freed slave Thomas Dedrick and his son, William, constructed this small, yellow house. Dedrick was one of the first freed slaves in Travis County in the 1800s. The historic house is now fully restored and serves as the African American Cultural and Heritage Facility. Javier told me he enjoys taking guests to this house because it “tells the strength of this population.”

These are businesses in town Javier wishes more Austinites supported:

Javier also mentioned the Austin Urban Music Fest that takes place during the Texas Relay Weekend. While it’s not a standing, traditional business, Javier still wants the festival to be a business people support and for “non-Blacks to know that they can still come.” Javier also talked about supporting the Black businesses we might not necessarily see on Instagram, like real estate agents, lawyers, and insurance agents. To find a list of local businesses, visit the Greater Austin Black Chamber.

Lastly, Javier wants you to about a sort of “tech incubation program for minorities.” DivInc is striving to “empower people of color and women entrepreneurs and help them build successful high growth businesses by providing them with access to education, mentorship, and vital networks.”

Javier hopes he’s helping tour guests take a trip through history to understand how a Black individual is feeling today. He explains that, “this isn’t an issue that just popped up today. Racial violence is a continuation.”

“I want this to be a learning experience for people to see how Blacks have fought continuously against the system from past to present,” he said.

As I thanked Javier for giving me the time to interview him, I asked him if there was anything else he wanted to add. “I don’t want the movement of Black Lives Matter to be a fad,” he added.

Neither do we. If you’re looking to learn more about how you can help further the cause of the Black Lives Movement here in Austin, contact the Austin Justice Coalition.

If you’re looking to participate in a tour with Black Austin Tour, you’re in luck! During COVID-19, Javier has switched his tours to online. Though the tours are virtual, Javier ensures that it’s still a very unique experience because the tour doesn’t pertain to one geographical place in Austin. Click here to reserve your spot.