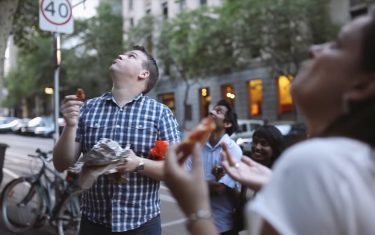 It’s Raining Tacos In Austin This Week. No, Really.

Yes, you read that correctly: It’s raining tacos in Austin this week.

You’ve heard of Purple Rain, of course. But have you heard of Taco Rain? Well, before we go any further in this post, I’m going to ask you to hit play on the YouTube clip below. Once it starts playing, you may continue reading. Mmkay?

Alright, now that we have an appropriate soundtrack, here’s what happened…

Austin’s own Torchy’s Tacos fastened hundreds of their flavorful creations to actual parachutes — created by an interesting Australian company called Jafflechutes — and then dropped them down onto the streets of Austin as thousands of SXSW revelers looked on.

Jafflechutes, which hails from Melbourne, bills itself as a provider of “snacks from the sky,” and says their business concept is kind of like a pop-up eatery where food is thrown at you from on high. A pop-up, float-down restaurant concept, they call it. Sounds fun, and looks something like this…

Needless to say, the promo was a huge success, although we hear there are no plans to do it again any time soon. So if you missed the taco rain, well… Better luck next time.

Take a look at the photos of the taco rain in this report by Austin NBC News affiliate KXAN.

This Video Of Austin Amid The Shutdown Might Make You Cry

Disney World and Disneyland are currently closed but here's how you can still enjoy a virtual day at Disney.
- April 2, 2020
Great News for Austin Movie Lovers – Here’s How You Can Watch SXSW 2020 Films For Free!

Amazon Prime and SXSW are teaming up to bring you 10 free days of SXSW 2020 films.