It’s no secret that Bob Schneider is a beloved Austinite. Many locals flock to his regular live shows around town. He’s been the singer and principle songwriter on nearly 30 studio albums, and his work has made it onto soundtracks of seven major motion pictures.

And while he’s been recognized for his musical accomplishments—he’s been named Musician of the Year six times at the Austin Music Awards—many people are unaware of his other creative endeavors.

His most recent achievement: a one-night pop up art gallery at the Wexel Art Displays.

The gallery featured a number of Schneider’s signature pieces, as well as a few never before seen works. 10 percent of the proceeds from the event will be donated to a non-profit organization committed to ensuring high-quality education for over 6,000 children in Cambodia.

We chatted with Schneider to understand a bit more about his creative processes and the entanglement of Austin’s creative scene.

Today, Schneider is well known around Austin as a local musician. But it was actually his artistic abilities that let him towards a career in music, not the other way around.

From a young age, Schneider was moved by art and his creative drive. At any given time, he had to be creating.

By age six, Schneider was drawing “fairly realistic portraits of [his] parents’ friends.” Schneider went on to say that by his teenage years, he could “reproduce photographs pretty convincingly.” It was around that time he knew he wanted to pursue art as a career.

When he began his studies at the University of Texas—El Paso, his interests centered on drawing and printmaking. He sometimes experimented with painting and sculpture as well.

The result was collages, a technique he still uses today. The main difference, though, is the method he used.

In college, he drew everything by hand, later developing his drawings into mostly human form. Today, he combines cutouts from old magazines and books and combines them with digitally enhanced media.

“When I started doing [the] collages [I do today], it was nice to not have to spend all that time drawing everything by hand,” Schneider said. “It was a shortcut to get to the final product, and I enjoyed the intensity of getting to the end so much sooner.”

While the time from start to finish might be less, the creative process and inspiration for his work remains the same.

According to Schneider, he doesn’t begin each project with an agenda or end product in mind. Instead, he uses his “emotional intuition.” He simply looks for things that cause an emotional spark.

“It’s like starting a fire with two sticks,” Schneider said. “At first there’s nothing, but as you go, you start [gaining more] heat, until, hopefully, you get something that’s interesting.”

On Music and Art

Creativity can manifest in multiple areas of someone’s life. For Schneider, it’s music, art, and poetry. For others, he says, it can be gardening and cooking, making furniture, or raising a child.

And while Schneider’s creative avenues often intersect—his art has been featured on a number of his album covers—his works rarely have a connection to the other. Though a lyric might turn into a poem, the visual and written materials are separate. Schneider says the only link between the two is the emotional feeling he holds while making one or the other. 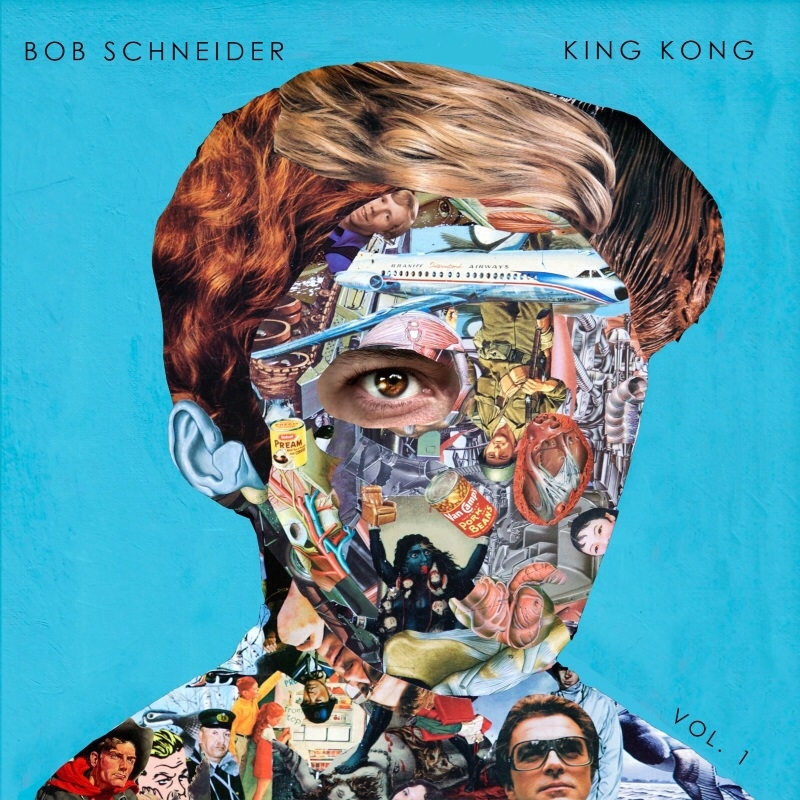 A collage from the King Kong record. Photo via Bob Schneider’s website.

Emotions play a key role in Schneider’s works. While his art and music don’t represent actual or autobiographical events, he strives to create the same emotion a certain event caused.

Schneider says he makes up his art as he goes. Because, at the end of it all, he likes making “stuff.”

The art gallery pop up was a small, intimate gathering. Hanging throughout the Wexel Art Showroom, Schneider’s collection was displayed in floating frames, urging viewers to use their imagination.

With no right answer, though, his images are open to interpretation. Schneider simply hopes viewers enjoy his work and what he creates.

And for those hoping to dedicate their lives to art or music, Schneider left us with one piece of advice: don’t do it…unless you have to.