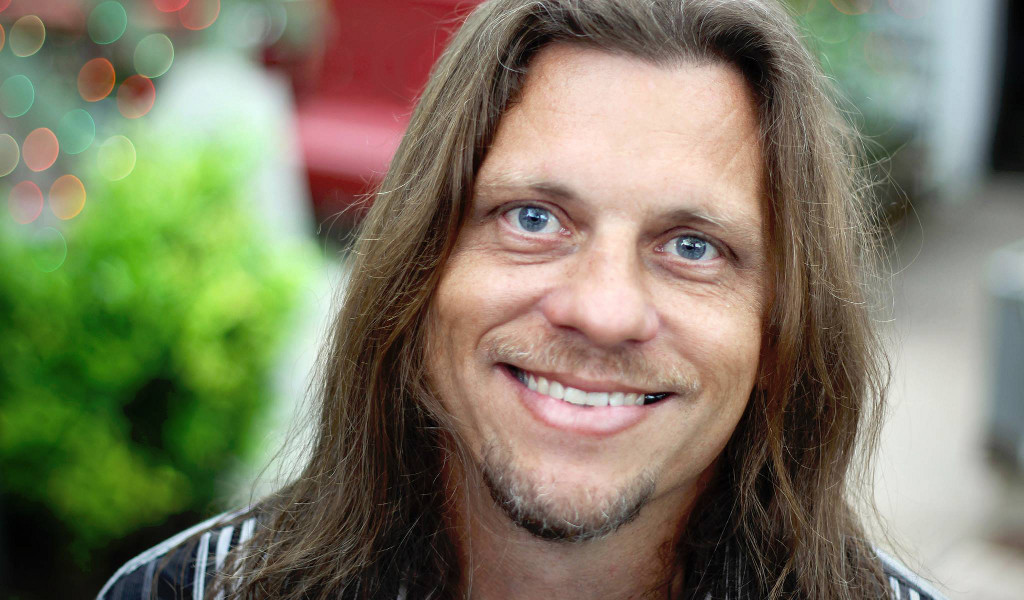 Adios, Cosmic Cowboy: Austin Comedians Reflect On The Death Of A Local Legend

On August 27, 2015 comedian Montgomery Wayne Seitz, the “Cosmic Cowboy,” passed away, and Austin lost a local legend. His death was sudden and heartbreaking, his absence just as palpable and raw. Simply put, for the Austin comedy scene, Montgomery Wayne was always there.

“He was just here that Thursday, the night before, sitting on the step and working on his set list, same as he had done for the five years or so that he’d been coming out,” recalled Michael David Park, longtime doorman at the Velveeta Room. “He was a very sweet man.”

Montgomery Wayne was a playfully generous person with an open heart, who was devoted to his family, supported and rallied fellow comedians, fought for the legalization of marijuana in Texas, and quite often needed a ride somewhere. His imagination for showcasing comedy was resourceful, bringing laughs to monthly NORML meetings, rides on Austin’s MetroRail, laundromats, and any bar that would give him a chance. Just a few months ago, Monty proclaimed his new goal was to get one hour of stage time each week. Considering that any given showcase might only net him five minutes on stage, that meant Montgomery was determined to hit at least 20 shows a week — ambitious by any standard.

“Well, uh… He was crazy!” Austin comic Tiffany Stepp said. “He was absolutely insane, but a very lovable person. He definitely taught me how to work hard. He worked his ass off and he really cared for people.”

“You always knew that Monty was going to be out there doing comedy, so it kind of gave you some hope to know that somebody was there in the trenches working as hard, if not harder, than you were,” MK Paulson added.

In a community where most of us are running our own races, Monty was always there to help others improve. Many newcomers to the Austin comedy scene, myself included, were quickly embraced by this friendly cowboy. In his passing, several have called him their “first friend” in Austin comedy.

“Monty was like a presence at open mics, and the weirder and worse the open mic, the stronger the presence,” Chris Castles recalled. “He was such a staple.”

“His voice keeps popping into my head periodically, and every time I hear it it makes me laugh,” comedian Kat Combs said. “He was always talking through his smile.”

I met Montgomery Wayne Seitz at my first open mic here in Austin. While Monty sauntered up to the front, I quietly thought to myself, “Who’s the old guy?” As was signature to his act, Monty walked onstage, placed his iconic cowboy hat on the microphone stand, smiled and introduced himself. “I am a 7th generation Texan, my kids are 8th generation,” he said. Being a 5th generation Texan, I was immediately impressed… But his introduction as a Texan and a father was just a glimpse of the pride and values Montgomery was so dedicated to.

“I describe Monty as an indomitable spirit. He had the ability to just see the positive,” comedian Bob Khosravi reflected. “I think the big thing we lost was that giant heart he had and his willingness to support and bolster everybody.”

“I think he really brought the community together,” offered Valerie Nies. “If you’re a cynical person like I am you’re like, ‘why is this guy so cheerful?’ But as I got to know him and heard him talk more about his personal life, he was somebody that was joyful to see.”

His involvement with the stand-up community seemed almost unimaginable, given his familial life and responsibilities. After his wife, arguably the love of his life, was traumatically injured in a car accident, Montgomery Wayne’s devotion, love, respect, and care for her remained endless, all the while exacerbating his emotional capacity to care for others. Where other people might retreat or become embittered, the spirit in Montgomery Wayne seemed to grow and thrive with love. “I was always really respectful of him, that he stayed with his wife, raised those two kids by himself. He was always proud of his kids.” remarked Michael David Park. “For a guy with such adversity in life, he had an extremely positive attitude. Tenacious.”

“He was so thoughtful to talk to you about love, and that really came across when he did our show,” comedian Ella Gale said. “It was one of the most special comedy things I’ve been a part of. Where comedy gets honest, it’s funny, it’s sad, and it’s real.”

Montgomery’s comedic material often varied from light fare to extremely personal. His fearlessness has been echoed in the many remembrances that have followed since his death. The totality of his work and generosity are surely part of his legacy but only second to that of being a proud father. He repeatedly quipped that he believed in evolution because his “sperm had just graduated college, with honors!”

“I’ve never met anyone that was such a strange and amazing combination of factors and attributes,” said comedian Eric J. Nagurney. “There’s nobody like Montgomery Wayne. If I see another middle-aged-stoner-cowboy-mattress-salesman comic, I assume they’re just stealing his bit. He’s obviously incredibly beloved.”

As artists, we are all trying in some way, shape, or form to make a name for ourselves and hopefully leave something positive behind. The bittersweet reality of Montgomery Wayne’s passing is that he accomplished exactly what we all set out to do.

Sail on sweet cowboy. We all love you so much.