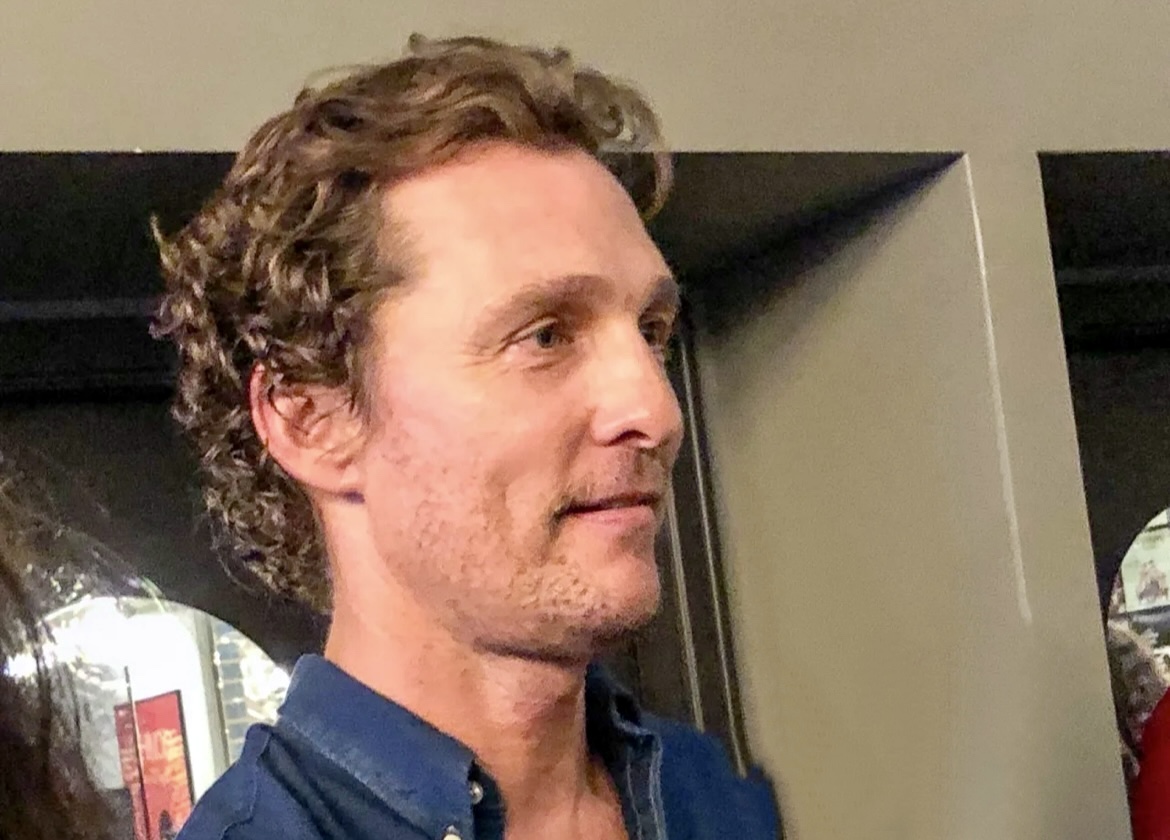 Over the years, Matthew McConaughey has given us many many reason to love him. And since today is the Oscar winning, bongo playing, smooth talking Texan’s birthday, we think it’s the perfect time to list our favorite things about the Minister of Culture.

Here Are 10 Reasons Matthew McConaughey Is Our Favorite Austinite!

In 2017, MM appeared on “Good Morning America“ and sat down with ABC’s Peter Travers to talk about why he moved his family to Austin. “My mother is there, the rest of my family is there,” he said. “I just feel at home there.”

We spotted his mother at the SXSW screening of Mud, the Austin premiere of Bernie, and the AFS screening of White Boy Rick.

In October 1999, the then up-and-coming 29-year-old actor was arrested after a Tarrytown neighbor called the police with a noise complaint. What happened next will live in infamy. More info here.

8 – He’s an official Professor at the University of Texas

The University of Texas Moody College of Communication announced in 2020 that McConaughey is now a professor of practice in the Department of Radio-Television-Film. The Oscar winner had served as a visiting instructor since 2015.

The self proclaimed Minister of Culture is often seen on the sidelines of UT football games. He has appeared on “ESPN’s College Gameday” and even inspired the team with a Wolf of Wall Street style warm up chant.

6 – He Helped Bring Soccer to the ATX

In addition to being part owner of the Austin FC team, McConaughey has been vocal about his dream for the team. At SXSW 2021, he said, “My hope is that if you take a snapshot of the stadium – when you zoom in, it should look like all the rich and diverse pieces of Austin in one stadium. Now we’re creating a destination for all the different communities in Austin to come together.”

It’s no secret that the man is loquacious. That surely plays a part in his role as a brand spokesperson. When you see him waxing poetic while driving a Lincoln, you too want to drive a Lincoln. When he’s sitting in a wheat field sipping on a Longhorn cocktail by Wild Turkey discussing oak and mesquite throwing a party at the lake house, you want to be at that party.

Speaking of Longbranch, we tried some specialty cocktails featuring the specialty blend and we highly recommend.

The fave was a drink called “Tail Feathers.”
Here’s the recipe:

4 – He Cares About the Community

But that’s not all! During the Corona crisis, he did many things to help the city stay safe. Learn about all of them here.

When Jimmy Fallon brought “The Tonight Show” to Texas for his first college roadshow, his guest was, of course, Professor McConaughey. He talked about the many reasons people are welcome in the ATX where “nobody is too good and everybody is good enough.” And what about those who don’t respect our value and core soul? “Please keep on flyin’. Drive on by,” he exclaimed.

No matter who he’s chatting with, McConaughey always has a quip and a motivation message. One of the best examples of that is this convo with fellow UT alum Emanuel Acho on his series titled “Uncomfortable Conversations With a Black Man.”

If you haven’t read “Greenlights,” we’re sure you know someone who has. And that someone has probably told you how entertaining and even enlightening it is. No time to sit down and read? Download the audio version. There’s nothing quite like hearing those tales from the man himself.

In conclusion, it’s clear that McConaughey is more than alright times three. And speaking of that infamous phrase, if you want to relive that classic Dazed and Confused moment, here’s how you can do just that.