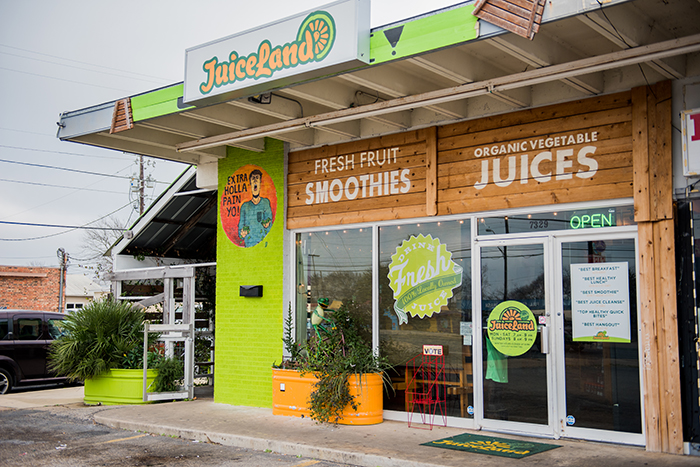 You Need JuiceLand’s Nutritious Smoothie Goodness In Your Life

Despite our best efforts, Austin was not ranked as one of America’s fittest cities in 2015, according to the American Fitness Index’s annual report. We placed 20th in the study, which isn’t that bad… but we can do better. And quite a few Austinites are walking the talk, too — considering the popularity of local health food companies like JuiceLand, which makes it easy to prioritize exercise and healthy eating habits (while still occasionally making exceptions for tacos, of course).

JuiceLand was founded in 2011 by Matt Shook, a longtime Austinite and juice lover. Technically, Shook founded JuiceLand in 2011, but he’s played a huge role in keeping Austinites juiced since his beginnings with the late Juice Joint in 2001. As he gained experience in the juice industry, Shook developed a vision for his own business — one that not only encouraged Austinites to seek out nutritious adventure fuel, but also one whose socially-conscious employees and live music program cultivated a distinctly upbeat and positive atmosphere for customers.

“We are a fountain of freshness in a world of fast food,” said St. Pierre. “We’re dedicated to serving up the highest quality ingredients and we aim to inspire our community to live healthy, creative lifestyles with active outreach programs like our Feel Good, Do Good initiative.”

Every month for Feel Good, Do Good, JuiceLand’s chefs devise a unique smoothie recipe, which the company sells to benefit local nonprofits like Austin Disaster Relief Network and Austin Children’s Services. February’s smoothie special is the Raspberry Rendezvous — a pink masterpiece made with banana, almond milk, chocolate chips, maca, and of course, plenty of raspberries. For each Raspberry Rendezvous sold, half of the profits will go to Young Texans Against Cancer: Austin Chapter, a volunteer-run organization that raises funds for cancer research.

Now, if the company’s fun, music-infused vibe and generosity don’t make you a diehard JuiceLand fan, the delicious nutritiousness they serve will probably push you over the edge. Fueled by fresh, organic fruits and veggies, JuiceLand’s menu is beautifully overwhelming with more than a dozen juice options, over 30 smoothies to choose from, and total freedom to create your own drink.

And that’s not even counting their extensive selection of nutritional shots and hot drinks, their juice cleanse and Immune Booster kits, and grab-n-go snacks like quinoa and vegan taco salads, hummus, and goodies made by local companies like Bearded Brothers. They’ve even got half a dozen kid-friendly recipes for little ones who haven’t yet developed an appreciation for some of the more potent add-ins.

Generally, you can expect to spend $5-7 for a modestly-sized JuiceLand smoothie with lots of ingredients, but many customers are totally ready and willing to pay more than $13 for JuiceLand’s biggest and best recipes. “Our Immune Booster Kit is a no-brainer when it comes to fighting back against a cold or allergies,” said St. Pierre. “It’s easy to transport and includes a hot drink to soothe your aches, a bottled juice to up your vitamin intake, and a potent medicinal shot to ensure you knock out every last germy bit.”

JuiceLand operates 14 local storefronts — three in Central Austin, three in North Austin, two in East Austin, three in South Austin, and three in West Austin — and they’ve even set up shop in Houston and New York. You can find exact addresses and contact details for each location here.

As a general rule, all of JuiceLand’s shops are open from 7 a.m. to 8 p.m. on Mondays through Saturdays, and from 8 a.m. to 8 p.m. on Sundays, but if you’re craving juice after hours, take note: you can buy JuiceLand products in some of Austin’s most iconic coffeehouses, markets, and grocery stores.

For those laid up with cedar fever or in a huge rush to get to work or class, JuiceLand mercifully offers online ordering! Just head over to their website, select your pickup location, tell ’em what you want, pay, and they’ll do their best to have your smoothie or shot ready for you when you arrive.

This is a huge deal, since during peak hours, the lines at JuiceLand’s most popular storefronts often extend out the door — despite employees’ heroic efficiency.

“The pace is always really quick and our turnaround for getting smoothies out to people is just so fast,” said Leather. “Usually we’re all just having a really good time dancing and making smoothies [at North Burnet] and every shop has the same kind of really fun, upbeat vibe.”