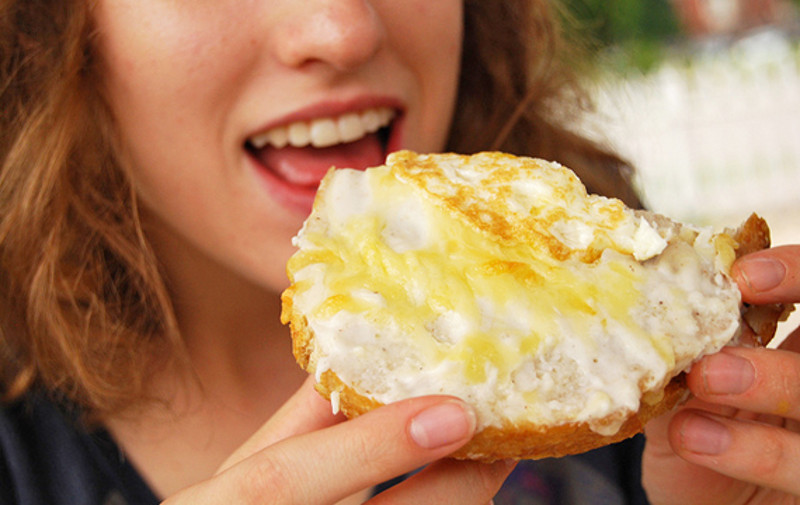 It isn’t always easy being vegan in a city that could probably safely claim to be the Barbecue Capital of the World. True, Austin is incredibly progressive, but this is still Texas, y’all — the land of Blue Bell and brisket. Even at some of our most beloved local restaurants, the plant-eaters among us are often hard pressed to find appetizing and nourishing meals that line up with their dietary values.

Happily, the number of all-vegan and veg-friendly restaurants in town has been steadily increasing over the past few years, especially within the food trailer movement. Since we absolutely want our herbivore neighbors to enjoy ATX’s colorful food culture, we’ve cultivated a list of ten of the best vegan eats and eateries in the greater Austin area:

10. Kerbey Lane Cafe is the uncontested king of vegan pancakes We adore Kerbey Lane Cafe for multiple reasons. Not only do they serve food that makes both our tastebuds and our tummies supremely happy, but they’re also champions of the local and sustainable food movement and they seriously care about our community. But back to tastebuds. Kerbey Lane serves three major vegan eats beyond salad: a veggie burger that’s usually quite decent, a tofu breakfast scrambler that’ll make you curl your toes, and the best friggin’ vegan pancakes ever. A long-time alternative diet favorite, Arlo’s is a all-vegan food trailer with three trucks — one that’s usually parked at Cheer Up Charlie’s, one that usually sets up shop at The Grackle, and one at Spiderhouse. So what do we mean by vegan comfort food? We mean burgers and tacos, people. Arlo’s mouthwatering Bac’n Cheeze, Chipotle Chick’n, and BBQ burgers are unmatched in Austin, and their Street and Chick’n tacos are wonderful too. Sporting “modern plant-based cuisine,” Conscious Cravings is an all-vegan food trailer that’s currently parked at South Austin Trailer Park & Eatery, as well as a location in the Mueller area. They’ve also opened a new location in the trendy St. Elmo district (located in the yard). While Conscious Cravings sells multiple different types of food, including wraps, salads, and smoothies, it’s their tasty Bella wrap that has us drooling. Made with portabella mushrooms, grilled onions, tomatoes, and the trailer’s own original recipe for herbed vegan mayonnaise, memories of the Bella will probably keep you up at night. Just saying.

You might not make it as far north as Georgetown very often, but trust us when we tell you that Nancy’s Sky Garden is worth the drive. Heck, it’s even worth the traffic you’re bound to hit on I-35! Not only does Asian-inspired Nancy’s serve some of the most epic salad bowls and mango rolls known to mankind and make a ton of vegan options available to their clientele, they also boast an impressive specialty tea menu and stock multiple vegan Lick Honest Ice Creams flavors. Pro tip: Sit out on the balcony for a lovely (and usually quiet) view of Georgetown’s historic square. Update: Nancy’s has added THREE new locations, so you don’t have to drive all the way to Georgetown if you don’t want to. Find them in Cedar Park, Round Rock, and off 290. Buffalo Cauliflower Pizza. The Philly Seitan. TACO TUESDAYS. These are just a few of the reasons why Counter Culture deserves a visit. Once a humble little food trailer serving up “internationally inspired” raw cuisine, Counter Culture has quickly become a local favorite. The company opened an East Austin brick and mortar site three years ago. Even cooler: you’ll love their community- and health-minded business philosophies and their donut holes are seriously yum.

5. Bistro Vonish is Vegan Dining at its Finest

Are you itching to wine and dine at fancy restaurants, but repeatedly find nothing vegan to eat on ritzy menus? Bistro Vonish is here to help. They’re an all-vegan food trailer (with a brick and mortar location in the works) whose high end vegan cuisine is guaranteed to make you feel glamorous and gluttonous at once. Bouldin Creek Cafe isn’t exactly a vegan restaurant (it is, however, a vegetarian one), but they might as well be. The vegan-specific dishes that they do serve are seriously good — especially their tofu scrambler, which will make you remember why life is worth living — and they keep dairy and meat-free ingredients on hand to be able to make most dishes vegan. Combine that with their artsy bohemian atmosphere, friendly waitstaff, and varied drink selection, and you’re gonna want to put Bouldin Creek on your restaurants-to-try list, dear vegans.

Mother’s Cafe & Garden is hands down one of the best vegan eateries in Austin. If their amazing Bueno Burger — an original concoction of seeds, grains, vegetables, and tofu that even veggie burger skeptics will devour — isn’t enough to convince you of that, then surely the cafe’s extensive veg-friendly menu will. Vegans don’t often have more than a few options at restaurants, but most dishes on Mothers’ menu are vegan or can be easily prepared as such.

2. Want a seriously yum burrito? Chart a course to the Vegan Yacht sailor Two words: Freeto Burrito. No? Arrrg, we’ll explain. The Freeto Burrito is a grilled flour tortilla wrap stuffed full of corn chips and organic tempeh chili, it exists because of the geniuses at The Vegan Yacht, one of Austin’s all-vegan food trailers. And if you eat it, you’re going to want to name your ship after it. Now, that’s not to say that The Yacht’s other menu items are not equally as delicious, because they are. It’s just that where else in these waters can you get vegan Frito pie in wrap form? Nowhere, mateys.

1. And of course, there’s the Vegan Nom and its killer tacos We interviewed The Vegan Nom’s owner one time. Check it out.

Generally, vegan tacos are something of a joke. Many Tex-Mex establishments don’t make a habit of stocking dairy free cheese alternatives or faux meats in their kitchens, so most “vegan” tacos tend to be bland and disappointing unless you make ’em yourself. Enter The Vegan Nom, “Austin’s original all vegan Tex-Mex taco trailer,” where all of the tacos are delicious and conscious (if a bit spicy), and breakfast never ever ends. Oh and Northloop fans — they have plans to reopen that trailer some time in 2018, so stay tuned!

Bonus vegan item: You can now find the exclusive/elusive Impossible Burger, the one that bleeds and seems like real meat, at Hopdoddy Burger Bar. Be sure to ask for it vegan, as it’s usually served with cheese and on a non-vegan bun.

Once you’ve exhausted this list, Austin’s still got a few more veg-friendly eateries that are worth your time. Try BBQ Revolution for delicious vegan barbecue (yes, it really is “all the grillin’ with none of the killin'”). Guac N Roll serves up some amazing vegan guacamole, Sweet Ritual, Bananarchy, and Lick Honest Ice Creams are both ready and very very able to satisfy your non-dairy dessert cravings, and Promise Pizza‘s got your pie needs covered.

And if that’s not enough, Casa De Luz, Nice N Ful, Cool Beans, and Unity Vegan Kitchen have also all been hailed for the quality of their varied vegan grub — proof that, maybe someday, Austin can claim a third title: Vegan Food Capital of the World.