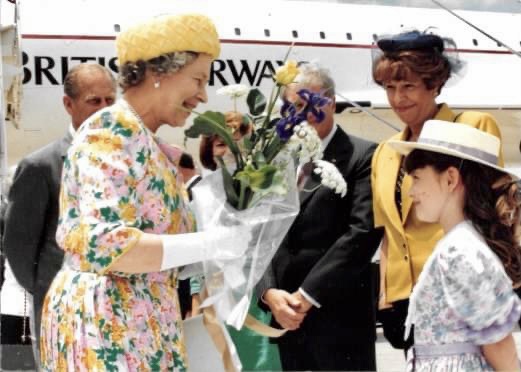 When Queen Elizabeth and Prince Philip visited Austin in 1991, a local nine-year-old was asked to greet the Queen with flowers upon her arrival. New Braunfels native Loren Steves (née Ellison) was and is that lucky girl.

The Goodwin Frazier Elementary student was actually more excited about getting to skip school that day than meeting the royals. But how did the opportunity even happen for the third grader?

Steves’s uncle Lee Cooke was the Mayor of Austin at that time. He invited her to present the Queen with flowers after her Concorde touched down at the Bergstrom Air Base. That’s when this picture was snapped.

That’s the Mayor’s wife Barbara Vackar in the back, seen partially between the leaves. Steves told Austin.com she was very close to her aunt, who was prominent in the Austin social scene. Mayor Lee Cooke is to her right. Steves believed the woman standing next to him is the Queen’s assistant at the time. She and a bodyguard escorted Steves up the runway, where her parents were not even allowed. Of course, Prince Philip is standing to the left of Queen Elizabeth II.

Prior to this moment, Steves said she had to practice the hand off, as she was not allowed to touch the Queen. Her greeting was, “Welcome to Austin, your majesty.” She then curtseyed.

“I was a very shy child so I’m pretty sure everyone was expecting me to freeze,” Steves said. “But I nailed it.”

The royals were in Austin for just 21½ hours. According to this Statesman article, a motorcade left the airport and took them up Congress Avenue to the Capitol, where they were greeted by a 21-gun salute. Governor Ann Richards, Lieutenant Governor Bob Bullock and Speaker of the House Gib Lewis welcomed the royals. The mayor presented Queen Elizabeth with a key to the city before the couple retired to a room at the Four Seasons Hotel. They later attended a reception and dinner at the LBJ Presidential Library.

After Steves learned the news of Elizabeth’s passing, she posted the picture of that day on Facebook along with this caption.

Listen Liz, my homegirl, my ride-or-die, it was a great run and I’m proud of all you’ve accomplished. I’d have rather gone out ‘Thelma and Louise’ style but you always danced to your own drum. You will be missed and I was honored to have met you.

Steves still lives in Austin where she works as a realtor and apartment locator. You can learn more about her here.