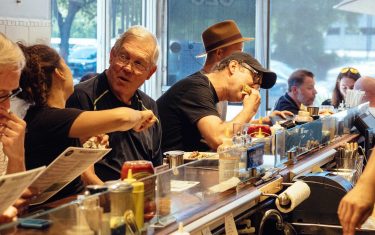 These East Austin Breakfasts Are Totally Worth Waking Up Early For

East Austin is ground zero for fantastic Mexican food. And while you can certainly get out-of-this-world breakfast tacos and migas, East Austin has much more to offer. Even healthy food! Sure, we’ll tell you where to get some of the best Mexican breakfasts in the ATX, but don’t pass over the other places in our guide to the best East Austin breakfasts.

Tacos not on Tacos Tuesday ?

We told you East Austin has strong Mexican food places, so we’re starting this list with one. Paco’s Tacos has an all-star line-up of signature tacos, and you can’t go wrong there. The migas taco is only $1.99 before 11 a.m. Now, that’s muy generoso!

If you’re in an adventurous mood, try the Rise & Shine (a sandwich made with a layer of refried beans, topped with bacon, cheese, poblano peppers and a fried egg plus a side of potatoes) or the Bacon Gordita (a thick corn tortilla pocket filled with a blend of scrambled egg, seasoned potatoes, bacon). They have all the flavors you come to expect in a Mexican breakfast put together in creative ways.

A post shared by Cherrywood Coffeehouse (@cherrywood_coffeehouse) on May 23, 2017 at 8:23am PDT

Burger King will slap together a fast food hamburger “your way,” but Cherrywood Coffeehouse has a custom sandwich that should interest you more. Their breakfast sandwich comes with your combination of any three fillings on your choice of bread. It’s completely up to you! This makes for a really great on the go option when you combine it with a cup of some of their excellent coffee.

Joe’s Bakery is the epitome of a family business. Generations of Joe Avila’s family have churned out great food for Austinites for decades. And since Joe’s passing in 2010, his family has kept the business running. When you stop in for breakfast, try the Joey Rocha Plate (two eggs, pork carne guisada, potatoes, beans, sausage or bacon, and two tortillas) or the Breaded Pork Chop Plate (4oz. breaded pork chop, two eggs, beans, potatoes, and two tortillas).

A 24-hour diner is bound to have some breakfast foods to satisfy your growling stomach, and Star Seeds Cafe is just the place to go. You might expect a diner to have grits on the ready to slap on your plate, but at Star Seeds Cafe you get much more.Their Cheese Grits Breakfast includes bacon, fresh fruit, and an English muffin. If you’re feeling like having queso with breakfast, the A-Baum has two English muffins stacked with sausage patties, scrambled eggs, and queso.

When you walk into Cafe Creme, all you need to do is tell them you love crepes. And you definitely won’t need Jean Girard twisting your arm. You can get savory crepes like the Nova Scotia (smoked salmon, cream cheese, tomato, red onion, and capers) and the Versailles (brie, parmesan, artichoke, mushroom, onion, and spinach), or you can opt for sweet crepes like the Florence (banana or strawberry, Nutella, and whip cream) or the Cordoba (strawberries, dulce de leche, cream cheese, almonds, and whip cream). It’s really hard to go wrong with these little blankets of joy.

If you’ve ever lived anywhere considered “southern,” you’ve had biscuits and gravy. While some breakfasts leave you wanting more by midmorning, this savory dish is a breakfast that’ll hold you all the way to lunch. East Austin food truck Gravy specializes in biscuits and gravy. In fact, they have three varieties you can choose from: Deep South (pork sausage cream gravy), Mid-Western (bacon cream gravy with bacon pieces), and Border Crossing (rich brown gravy with chunks of beef, onion, and hatch green chiles).

We are hiring!!! Looking for full or part time kitchen help. Experience preferred but not necessary. Drop off a resume at the shop or email to info sa-ten.com

Unless you’ve been to Japan, you’ve probably never been to a Japanese-influenced coffee shop specializing in espresso drinks and teas that also serves local pastries and Japanese coffee shop style food items. Sounds intriguing, doesn’t it? Head over to Sa-Ten Coffee & Eats to give it a whirl. Your East Austin breakfasts will never be the same!

Okay, health nuts, we’re sorry we tempted you with biscuits and gravy. Now, here’s the place for you. Blenders & Bowls serves smoothies and fruit bowls loaded with acai, a superfruit from Brazil that does all sorts of great things for your body. So eat and eat and eat, but never feel guilty at Blenders & Bowls. We told you healthy East Austin breakfasts exist!

A diner that prides itself on the finest of fresh, local, and organic food? Must be in Austin. Yup! Counter Cafe is a place where you can feel good about where your breakfast comes from. They are particularly partial to their hot cakes, but really, you can’t go wrong with anything on the menu. With tempting items like Quail & Eggs and Crab Cake Benedict, the hot cakes might have to wait for another day.

When in Austin, have breakfast tacos ?. #foodporn #fl2ca #roadtrip

With 19 variations on the breakfast taco, you’re sure to find just the right one at Mi Madre’s. Since it opened in 1990, this once 10-seat taco shop has gone through two renovations to expand into the large restaurant it is today. Now, they have two dining rooms, a patio, and an area for to-go orders. You can’t argue with that type of growth, and you can’t argue with their breakfast taco prowess.

In a new high-quality video posted to Instagram, Matthew McConaughey is making sure fans are clear on his feelings about the quarantine.
- March 30, 2020
Austin Media Join Forces for All Together ATX Telethon

Media outlets in Austin are collaborating to host an all-day digital telethon on Friday, April 3, with all proceeds going to All Together ATX.
- March 27, 2020
Westlake Grad Drew Brees Donates $5M to COVID-19 Relief