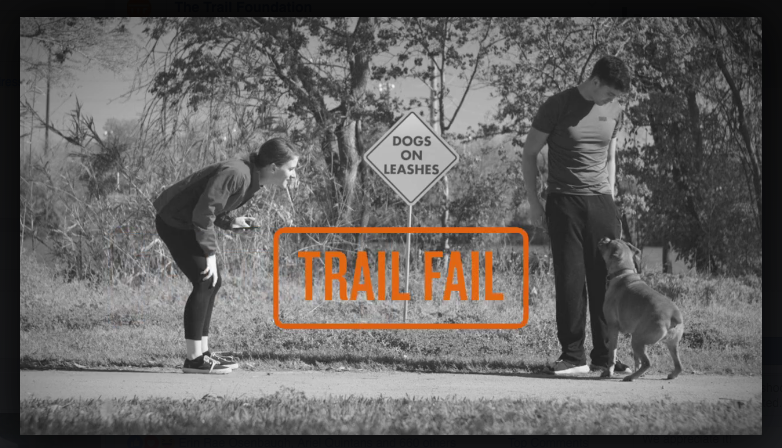 The great videos just keep on coming! Last month we profiled the City of Austin Code Department’s strange, yet somehow wonderful video series, and now another Austin entity has joined in on the fun. The Trail Foundation, which is “dedicated to protecting and enhancing the Ann and Roy Butler Hike-and-Bike Trail at Lady Bird Lake” created this hilarious video illustrating what not to do with your dog while out on the trail.

So far, Austinites are loving the video, partially because it is cute and funny, but mostly because so many people identify with these scenarios, according to the comments. After less than 24 hours of posting on Facebook the video has 100,000 views and nearly 2,000 shares.

This particular Trail Fail may be super annoying to those who have experienced it, but dang that ChaCha sure is cute. Her real name is Roxy and her pet parent is friends with one of the members of the Sanders/Wingo Advertising team that created the video.

The video was created in response to a survey conducted by the foundation regarding what trail users thought were the biggest safety issues, according to James Benson from The Trail Foundation. They then chose the top issues to highlight, which means there are more videos to come.

While the Butler Trail is not the only trail in Austin –here are a few more that we suggest for nature lovers– it’s certainly the most popular, and abiding by these simple rules are pretty critical to make sure to avoid trail rage.

The Trail Foundation works “in cooperation with the Austin Parks and Recreation Department to close the gap between what the City provides and what the Trail deserves.” This video is one of the pieces of the puzzle, and we’re certainly looking forward to the videos that are still to come.