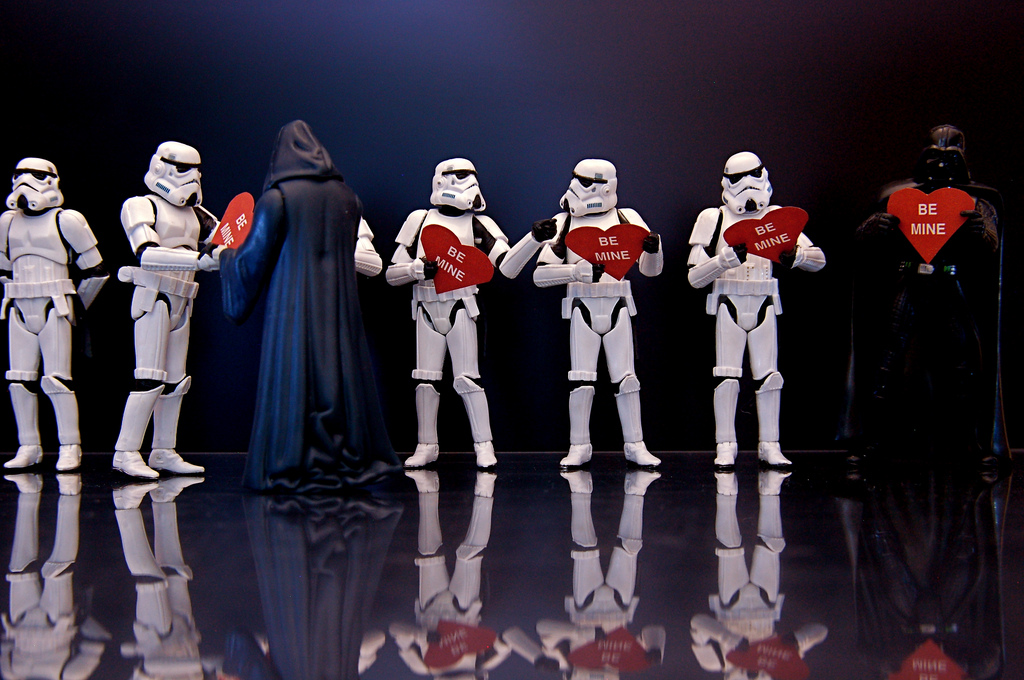 The Official Singles’ Guide To Surviving Valentine’s Day In Austin

For the single souls among us, Valentine’s Day doesn’t exactly ring in like the dawn. No, for many among the unattached, Valentine’s Day looms, brewing up woe like a Texas-sized thunderstorm. If you want to survive the great and terrible PDApocalypse, we recommend that you commit the following seven tips to memory and follow them closely on February 14:

Step One: Deal With Your Frustrations As Constructively As Possible First things first. You’re going to have to find healthy ways to deal with your frustrations about being single. Singles Awareness Day is not the time to wallow in self pity — do that and you’ll be lucky to make it an hour out there. This is war, people! Beat up on a punching bag, burn memorabilia from past relationships, clobber a pinata — or, if you’re feeling even more determined than that, join Austin Crossfit and get in a workout. All of these can be healthy ways to cope, but there are many others. What’s important is that you find some way to let all that bad energy out. It’s going to be hard, but if you want to survive Singles Awareness Day, it’s important for you to resist the urge to mope. You already did yourself some good by releasing some of your frustrations and maybe even some past baggage that you’ve been carrying around for a while. Now, it’s time to get happy, and there are very few things in life that cause this reaction faster than a visit to Hey Cupcake! If you’re couch-ridden from grief, they’ll even deliver. (Come to think of it, so does Brewdrop, if you’re needing, uh, even more help.) As you enjoy all that goodness, use the sugary headspace to create a mental boundary and refuse to let your relationship status ruin your day.

Step Three: Get Off The Old Social Grid Let’s face it: Social media can be a bummer on Valentine’s Day. Instead of subjecting yourself to a Facebook News Feed flooded with happy photos of happy couples and more romance-themed Twitter hashtags than you can handle, just shut it all off. You won’t regret it. In fact, you might even spend February 14 feeling refreshed and independent instead of lonely and desperate. Of course, for some, going without that soothing glow of a smartphone is easier said than done. So, if you absolutely must look at social media, try something new like Nextdoor.com, which has micro-social networks dedicated just to Austin’s neighborhoods, or an Austin singles meetup. Maybe it’ll help you with… If there’s anything you should have learned from survival stories like The Walking Dead, it’s that a person’s survival often hinges on his or her ability to band together with a small group of like-minded individuals. Emotional survival is no different. If Valentine’s Day is a sore spot for you, don’t try to weather it alone! Grab your other single friends and do something fun together. Get out and play video games at Recess Arcade Bar on 6th Street, or catch a show at Alamo Drafthouse. Have a Galentines Day party in the spirit of Leslie Knope and cap it off with some Kerbey Lane queso. All of these are great ways to make a holiday that might otherwise get you down into something fun and uplifting!

Step Five: Have An Adventure Instead of focusing on what you can’t necessarily change right away, a great way to walk away from Singles Awareness Day with all limbs intact is by experiencing something new. Visit someplace you’ve never been, like one of Austin’s many parks, or learn something new at the Austin Science & Nature Center. By opening yourself up to inspiration and discovery, you might just get a handle on things and find a way to shift your mindset to the positive.

Step Six: Find The Good In Being Single Independence. Spontaneity. A Thriving Social Life. Misadventures on Tinder. Being single carries its own set of benefits and curses. In order to survive Valentine’s Day, you’re going to need to embrace the benefits and try to ignore the rest, so grab a notepad and a pen and write out a list of things you can do and enjoy as a single that attached folks often can’t! We’re talking about things like screaming out some punk rock jams with your girls at Karaoke Underground, or knocking back brews with your dudes during game time at Twin Peaks. You don’t have to be totally satisfied with being single, but you’ll be much happier in life if you can find a way to feel okay about yourself right where you are.

Step Seven: Celebrate Your Unique Worth Valentine’s Day may traditionally be dedicated to romantic partners, but at its core, February 14 is ultimately a holiday that honors love itself. With that in mind, the final step to surviving this year’s Single Awareness Day is celebrating your own value as a person. Take this opportunity to embrace your good qualities and enhance them. Buy yourself something shiny at the HACIENDA Collection, or pamper yourself at Away Spa Austin. You won’t regret it.

No matter your plans, you too can survive Singles Awareness Day if you follow even just a few of these steps. Stay the course and you will find that being single in Austin on February 14 doesn’t mean constant, painful reminders that you’re alone. It’s just another beautiful day in the greatest city on earth!