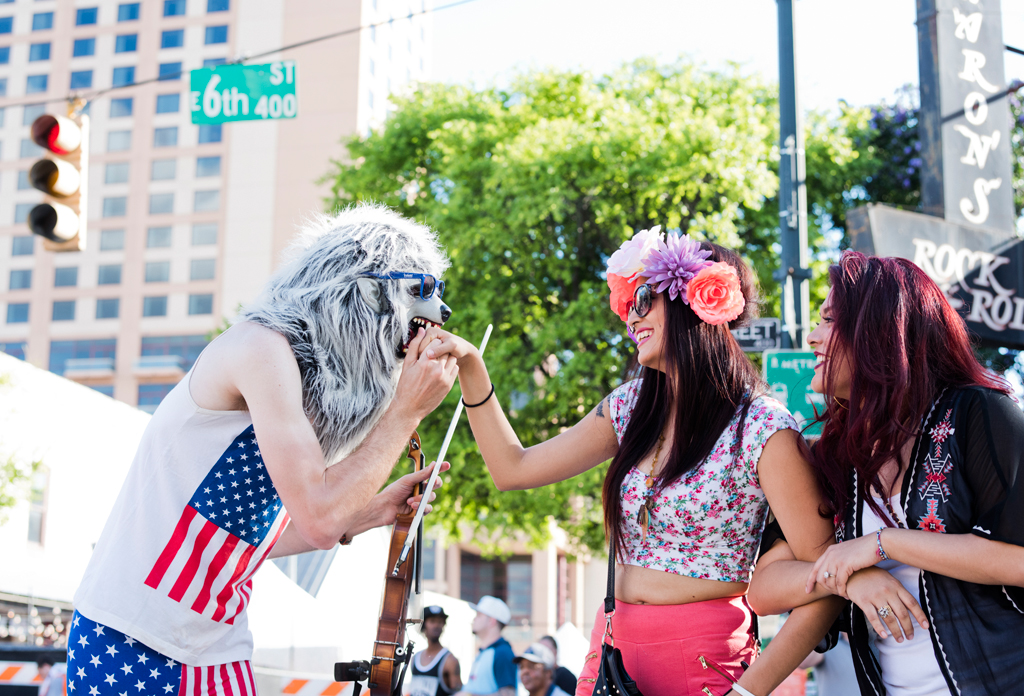 If you attended South by Southwest in any capacity, it’s probably safe to say that you witnessed your fair share of Austin weirdness. In fact, between all of the music pirates, giant squirrels, and thong-clad gentlemen that flock to Austin’s streets during SXSW, some might argue that the festival has just as much a reputation for attracting glorious oddballs as it does for bringing in amazing musicians.

Where else but Austin would one have the opportunity to meet a 494 year-old werewolf with an affinity for playing the violin? No, seriously. There really is a professional street performer called the Violin Monster who embodies a kindly werewolf and strings out classical, Irish, and pop culture tunes along South Congress or at the intersections of 6th Street and San Jacinto, Trinity, Neches, and Red River every year for SXSW. “Austin is a great city and I always enjoy performing in it,” the Violin Monster told Austin.com. “I feel very welcomed in the city and at SXSW. This year, I had a bunch of people come up to me or comment to friends how they’ve seen me at the festival for several years.”

Street performing, or busking, isn’t the easiest career. Even today, many people still think of buskers as beggars or hobbyists with nothing better to do. This might be true for some, but actually, most street performers are skilled professionals who endeavor to earn their livings by making people smile. The Violin Monster does work the occasional wedding or private party, but for the most part, he prefers the excitement and creative opportunities presented by street entertaining.

“There is a lot of negativity and misconceptions associated with street performing, but myself and my colleagues work hard to ignite a sense of wonder and creativity in people,” he said. “There is a feel of magic to it. I like surprising people, taking them out of their routine a little bit, and hopefully inducing a few smiles.”

That’s precisely why he decided to become a professional street performer four years ago. After spending almost 500 years living for himself, often succumbing to his violent tendencies, the Violin Monster wanted to give back. Having learned to play the violin as a boy in Ireland, it suddenly came to him that by embracing music, he could tame his inner beast and become a harbinger of joy instead of fear and tragedy. Now, he’s as docile as they come.

“There have been many phases of my life since I was bitten in 1546, including times where I embraced my savage side by working as a mercenary and a pirate,” said the Violin Monster. “Some of my actions have filled me with regret and sorrow, and I decided it was time to lead a more peaceful life. Playing the violin soothes me and allows me to control my beastly instincts enough so I don’t harm humans. I haven’t attacked anyone in over four years now.”

We don’t know about you, but we think that kind of milestone deserves a hearty, “Awwwwooooooo!” in the Violin Monster’s characteristic style. If you’d like to see or hear more from this benign beast online, visit his official website or Facebook page.

And do us a favor — next time you encounter the Violin Monster in your travels downtown, give him a high five, drop some cash into his tip jack-o-lantern, and give him a howl out on Facebook. Why? Well, besides the fact that amiable violin-playing werewolves are A-OK with us, keeping Austin weird definitely includes supporting street performers whose creativity and talents enrich our urban adventures, our daily commutes, and ultimately, our lives. Anytime he’s in town, the Violin Monster makes it a point to visit Hey!… You Gonna Eat Or What?, Royal Blue Grocery, Midnight Cowboy, and SquareRüt Kava Bar, and support local musicians and street performers. At SXSW, he howled right along with The Accidentals at their Stephen F’s Bar concert. Photo: Rebecca L. Bennett