Remember The Alamo With These Texas Independence Day Celebrations

Texans brag about Texas more than most anyone else about anything else, so it makes sense that we Texans celebrate the day our state became a nation.

Texas Independence Day marks the anniversary of the signing of the Texas Declaration of Independence at Washington-on-the-Brazos on March 2, 1836. Through this document, the signers asserted their Mexican territory was now the Republic of Texas. The Texas Revolution was already in full swing. Texans had already dared the Mexican Army to “come and take it,” and the Alamo was inhabited by a small rebellious force that would be slaughtered mere days later upon the orders of General Antonio Lopez de Santa Anna.

Each year, Texans stop to remember the Texas Revolution and to celebrate the things that make Texas great. This year, Austin has several options for you to bask in the glory of Texas.

Take time to remember more than just the Alamo

The rugged individuality, dedication, and bravery are just a few of the character traits that come to mind when you reflect on the magnitude of the Texas Revolution and how the people who fought in those battles shaped history. In that spirit, the local nonprofit organization, Celebrate Texas, will host several poignant ceremonies around Austin on Texas Independence Day and through the following weekend.

“The mission of Celebrate Texas is to encourage the celebration of Texas Independence Day with events and activities statewide,” Celebrate Texas board member George Rollow told Austin.com. “Personally, I am also a living historian — some would know it as reenactor — and I study and portray the lives of folks who fought in the Texas Revolution and formed the Republic of Texas. I believe the struggles of our forebears who attained for us the freedoms and history we have should be remembered.” 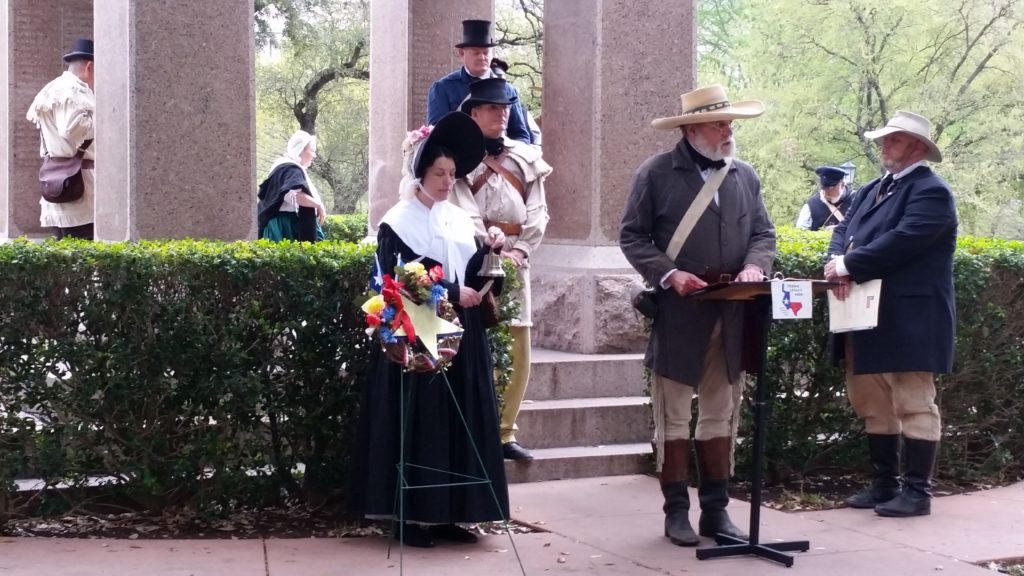 Celebrate Texas volunteers conduct a ceremony at the Alamo Memorial at the Texas State Capitol. Photo by Peggy Vallas.

On the morning of Texas Independence Day, the folks with Celebrate Texas will hold a ceremony at the Texas State Cemetery. The 9 a.m. program will include a commemoration and speech with participants in clothing like that worn during the Texas Revolution. The presentation will be followed by a musket volley which is a military style honor to those who participated in the Texas Revolution.

At noon, the Celebrate Texas crew will put on a program in the Capitol rotunda sponsored by State Senator Kirk Watson. The lineup includes historic presentations, speeches, music, singing, and dance presented by groups who show the diversity of Texas culture.

“I enjoy celebrating Texas Independence Day because Texas has such a unique history,” Celebrate Texas volunteer Peggy Vallas told Austin.com. “It reminds me of the passion and the patriotism that folks had during the American Revolution in Boston where I grew up.  As it is a day of celebration, it is also a day in which we can all honor the people who came before us who made sacrifices to help make Texas an outstanding state to live in.”

On Sunday, March 5, Celebrate Texas members will again gather at the Capitol but this time on the South Grounds at the Alamo Memorial. This simple ceremony will honor those who fell at the Texas Revolution’s most famous battle. In a simple but moving tribute, the name of each known defender of the Alamo will be read, and a bell will toll. The ceremony begins at 2 p.m.

But these aren’t all the Celebrate Texas events to be held in honor of Texas Independence Day …. 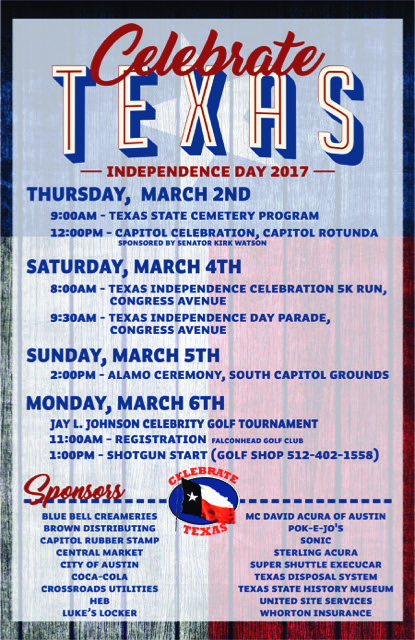 Texas Fun Fact: The “Come and Take It” flag was raised at the Battle of Gonzales as a taunt to the Mexican Army by the Texan settlers. The Mexican Army had given the settlers a small cannon to protect themselves from frequent Comanche Indian raids. As unrest grew, the local Mexican commander asked the settlers to return the cannon. The settlers initiated a skirmish, and the Mexican forces withdrew.

Run a 5K and then watch a parade

Can you even consider something a holiday if Austin doesn’t have a 5K? Probably not.

Make sure you go to bed early on Friday, March 3, because you’re going to need to wake up early for the Celebrate Texas 5K run and parade taking place on South Congress Avenue the following morning. Both the run and parade start at Cesar Chavez Street and end just in front of the Capitol.

Compete in a celebrity golf tournament

Spring is the best time to golf in Austin. The days get longer, and the sweltering heat of summer hasn’t set in yet.

If you fancy yourself as the weekend warrior version of Ben Crenshaw or Jordan Spieth, you’ll want to take the day off from work on Monday, March 6. Celebrate Texas is hosting its Jay L. Johnson Celebrity Golf Tournament that afternoon at Falconhead Golf Club. Check-in starts at 11 a.m., and the shotgun start happens at 1 p.m.

While Texas Independence Day is a day to remember when Texas broke away from Mexico, that doesn’t mean you can’t enjoy the unofficial liquor of Mexico as part of your celebration. Consider it an homage to one of the six flags that flew over Texas.

On Thursday, March 2, the Oak Hill location of Jack Allen’s Kitchen will hold its 7th Annual Republic of Jack Party. From 5 p.m. to 10 p.m., you can sit out on their patio and enjoy $6 Republic Tequila cocktails mixed by JAK’s beverage director David Toby. Pair those cocktails with JAK’s awesome meals and music by Duane & the Hipsters, and you have a readymade Texas Independence Day party.

Party with Texas Humor at the Yeti Flagship

You may not know it, but you’ve probably seen Texas Humor apparel all around Austin. They’re growing in popularity — and not just because of their funny homages to Texas made through their social media accounts. Austin.com profiled Texas Humor founder Jay B. Sauceda few years ago, and the company has kept going strong.

On Thursday, March 2, they’re teaming up with Yeti to hold a Texas Independence Day party at Yeti’s new flagship store on South Congress Avenue. Make sure you RSVP to the party to enjoy the live music, trivia, and beer.

Y'all! Come hang with us! RSVP at txpr.de/texasind

Texas wines may have stolen the headlines lately, but Texas beer continues to thrive. There are so many independent breweries in and around Austin that embody the take-action mentality of those who fought in the Texas Revolution.

Texas Beer Company in Taylor is hosting an all-day Texas Independence Day celebration on Saturday, March 4. This local brewery recently expanded their operations, and they’re honoring their Kickstarter contributors with a brick unveiling ceremony at 3 p.m. Before that, there’s a classic car show at 11 a.m. and music by Mitchell Tatum & the $3 Bills at noon. After the brick unveiling, Tommy Tynes & Andres Tovar play at 3 p.m., The Phantom Shakers play at 6 p.m., and Cody Justin King & the Free Beer Band play at 9 p.m. Davis Grocery & BBQ will provide barbecue, and pizza will also be available.

Texas Fun Fact: Spoetzl Brewery, where Shiner beer is made, is Texas’ oldest independent brewery, dating back to January 19, 1909.

Party with some Texas Exes

The Austin Chapter of the Texas Exes is hosting its 9th annual Texas Independence Day Party on Saturday, March 4, 1 p.m. to 4 p.m. in the back courtyard of the University Co-Op. But you don’t have to be a University of Texas alumnus to attend!

Tickets are $30. This family friendly event will include live music, free food and drinks, door prizes, face painting, and a silent auction. The party also features a freshly designed tee shirt for sale.

Eat some Texas-inspired grub at Eberly

"Eberly is a sassy, stylish destination that provides an entertaining evening of good food, drink and people watching. If you’re looking for a place that’s truly unique, with a sense of occasion, just follow the crowds to Eberly." Pick up the latest copy of @tribeza to read more about Karen Spezia's February pick. PC: Reagan Taylor

Can we interest you in eating some Texas-inspired food at a Texas-inspired restaurant and benefiting Austin History Center at the same time? Of course, we can! When you dine at Eberly from March 2 to March 5, they’ll donate $1 on select items to the Austin History Center. To start, you can get salted gulf coast redfish with oyster hush puppies or prickly pear snapper and shrimp ceviche. As your entree, try smoked pork belly. And for dessert, indulge in fried Texas pecan pies with vanilla bean ice cream. All four of these dishes qualify for the $1 donation.