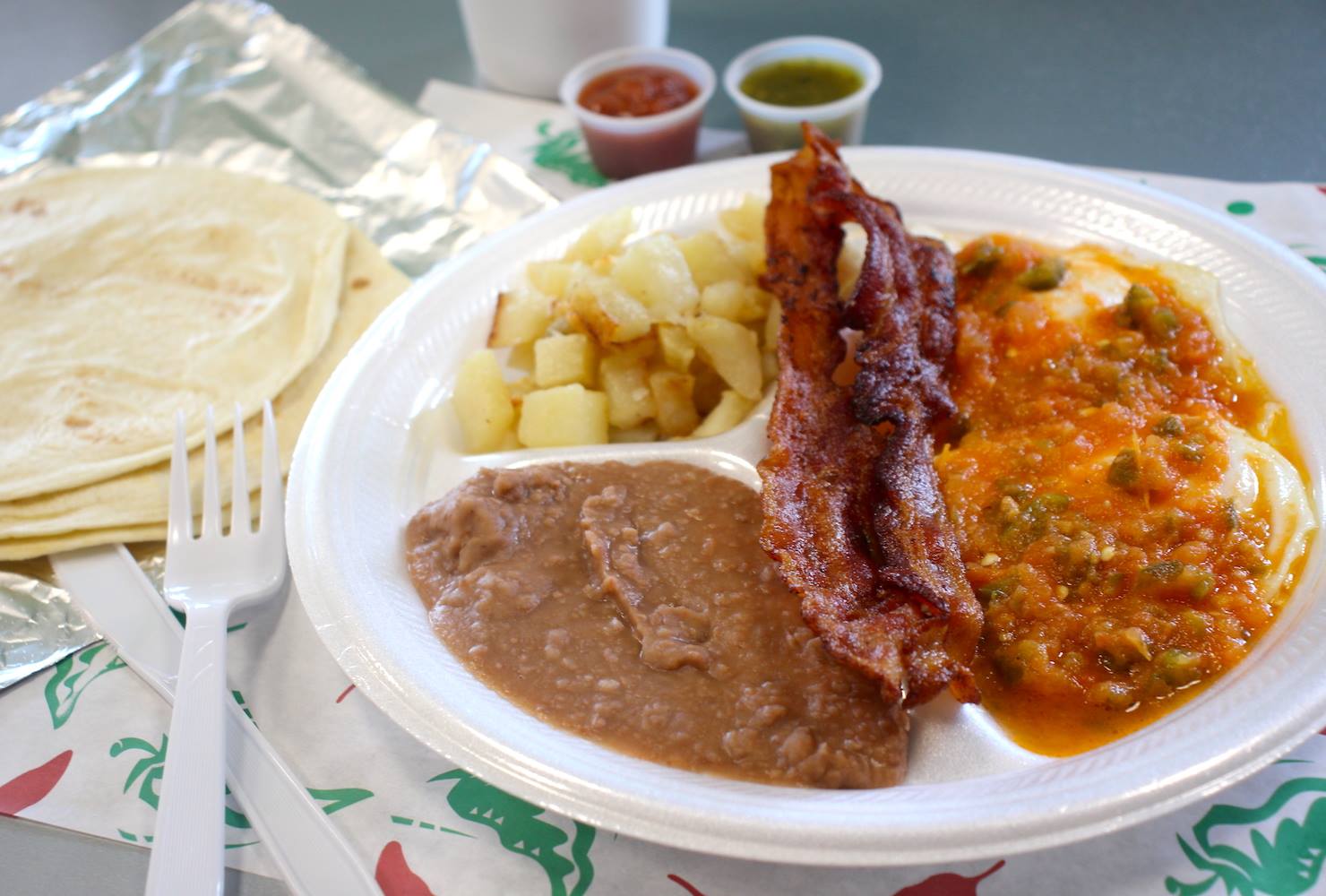 Got That Hangry Feeling? These 10 North Austin Breakfast Places Are For You

There are two types of people in the world — morning people, and people who hit the snooze button seven times before begrudgingly rolling out of bed. The bleary-eyed sort usually have that dreaded mix of hunger and anger once they’ve somewhat snapped to their senses. Stay clear of the path between them and their coffee.

North Austin has plenty of places to ease your hangry feeling. Whether you’re up and at ‘em before the sun comes up or you’re not sure your clock has an 8 a.m., these 10 north Austin breakfast places are sure to make you as chipper as an Austin commuter who made it to work before rush hour.

Is this you when those tacos drop?

Torchy’s Tacos gets more buzz around town than Tacodeli, but don’t mistake the difference in hype to indicate a difference in quality. Like its bedeviled competitor, Tacodeli started in Austin and has expanded its goodness to other Texas cities. For breakfast, try El Popeye or The Vaquero for a new spin on the classic breakfast taco. If you’re feeling exceptionally hungry, try the Migas Royale Plate: migas, queso, jack cheese, avocado, pico de gallo, with sides of Tacodeli potatoes, organic refried black beans, queso fresco, and tortillas.

Why would you go to a national chain donut store when you can go to a local donut shop? Check out donut 7 next time you have the craving for a glazed donut or a pig-in-the-blanket. Start your cheat day right!

No need to wait for #TacoTuesday because El Tacorrido serves up breakfast tacos all day. Build your own to suit your mood. Load it up, and chow down!

Now this how u start the weekend off… #InHeavenRightNow

The name Ken’s Subs, Tacos & More doesn’t exactly roll off the tongue. But you’ll definitely want the food on your tongue. The menu is full of simple, familiar foods. Nothing fancy here. Just order your go-to breakfast dish, and Ken’s will satisfy you.

Build your own breakfast tacos any time of day at Papalote Taco House. They have all your favorite toppings and more that’ll tempt you to be adventurous in curating your taco experience. Try interesting toppings like chicharon, cactus, calabaza, and poblano peppers. You just might make your own signature taco!

Migas from Cafe Java in Austin, TX. This is without a doubt my favorite breakfast dish in ATX, and best of all, it’s available all day long, so when I passed through at 5PM today, it was there. Eggs, tortilla strips, queso, crisp bacon strips, hashed browns, refried beans, and flour tortillas. The picture doesn’t even do this meal justice. I’ve been eating Migas at this restaurant for close to a decade now and it’s consistently good, every time. My full review of Cafe Java is at foodgavel.com/cafe-java/.

Of course, the coffee is great at Cafe Java, but don’t miss out on their food. Alongside your caffeinated beverage of choice, try one of their border platters such as their Migas Platter: scrambled eggs and corn chips covered with cheddar cheese served with a side of ranchero sauce and two slices of bacon.

When they name the place Taco Shack, the tacos better be killer. And they are! The signature taco here is actually a breakfast taco called the Shack Taco: a flour tortilla filled with eggs, chorizo, potatoes, and cheese. Or if you’re feeling your Texas pride, go for the Texan: fajita beef and eggs on a corn or flour tortilla.

Breakfast tacos are a delicious way to start off a Sunday morning. We picked up breakfast tacos from Vazquez Restaurant at Burnet and 183 for the first time. We shared 4 tacos.. potato & egg, bacon & egg, migas, and Beef fajita & egg. Aside from the potato & egg bring boring they were very good. Can't wait to go back!

In the minds of many Austin taco lovers, the tortilla makes the taco. At Vazquez Restaurant, the tortillas are stellar. Their salsa is the kind you only find at hole-in-the-wall Mexican restaurants — super hot and flavorful. Throw that in your taco, and your eyes will roll back in bliss.

If you want a breakfast place that knows your name like on the hit ’80s television show “Cheers,” become a regular at Kiefer’s Cafe & Catering. They’re only open 6:30 a.m. to 3:00 p.m. on weekdays, so get on down there to try their wide selection of breakfast plates. Just trying them all will make you a regular.

So far, this list of North Austin breakfast places has been filled with mostly taco places and greasy spoon dives. We’re ending the list with a fancier entry: the Domain location of Second Bar + Kitchen. We dare say you’ll want to make this place your new Saturday morning date spot. One of their most tempting plates is the SBK Benedict which is made up of poached eggs, hash brown potato cakes, tomato, garlic spinach, and brie cheese mornay. You should also try the steak and eggs which has grilled flank steak, over easy eggs, home fries, and chimichurri.