Where To Go In Austin On Trump’s Inauguration Day

Over the past few days, we’ve published a number of stories describing the efforts Austin restaurants, bars, and businesses have been making to defy Trump. It seemed as though every time we published a piece, another restaurant or bar announced its plans to do the same. Whether it’s donating profits, hosting an event, or supporting potentially marginalized human and civil rights organizations, Austin has shown their commitment to standing up for what it believes in.

With the restaurant industry leading the way, this is a movement that’s gaining momentum with each passing minute—and we’re happy to spread the word. Here’s everything that’s going on in Austin on Inauguration Day.

If you’re hoping to catch a bit of Trump’s inauguration ceremony, head to the Texas Public Policy Foundation for a live streaming of the event. Following the ceremony, political experts will lead a discussion to analyze and predict our country’s future holds. According to the foundation, a complimentary Chick-fil-A lunch will be served. To RSVP, visit their website.

Where to Eat, Drink, and (Try To) Be Merry

As per a story we published at the start of the week, Bouldin Creek Café will be donating 100% of its profits to Planned Parenthood, the ACLU, and the Southern Poverty Law Center. Fill up on vegan and vegetarian noms for a good cause.

Announced in an Instagram post earlier this week, Yellow Jacket Social Club is yet another Austin bar to hop on the anti-Trump bandwagon. On Inauguration Day, this eastside favorite will be donating 20% of its bar sales to human and civil rights organizations. The list includes Planned Parenthood, SAFE, Casa Marianella, and Women Rule. So go ahead; get the Frito pie.

Once Over Coffee Bar

Whether you like your coffee black or prefer it with cream and sugar, make it a point to stop by Once Over Coffee Bar from 7 a.m to 7 p.m. Located on South 1st, the coffee bar will be donating 100% of its profits to Planned Parenthood of Greater Texas. We’ll take a latte, and make it a double.

Friday is just another day in King Bee’s month-long fundraiser. The bar plans to donate a percentage of this month’s gross earnings to Planned Parenthood Texas Votes. Stop by on Friday for a cocktail or two and help this month’s earnings grow. 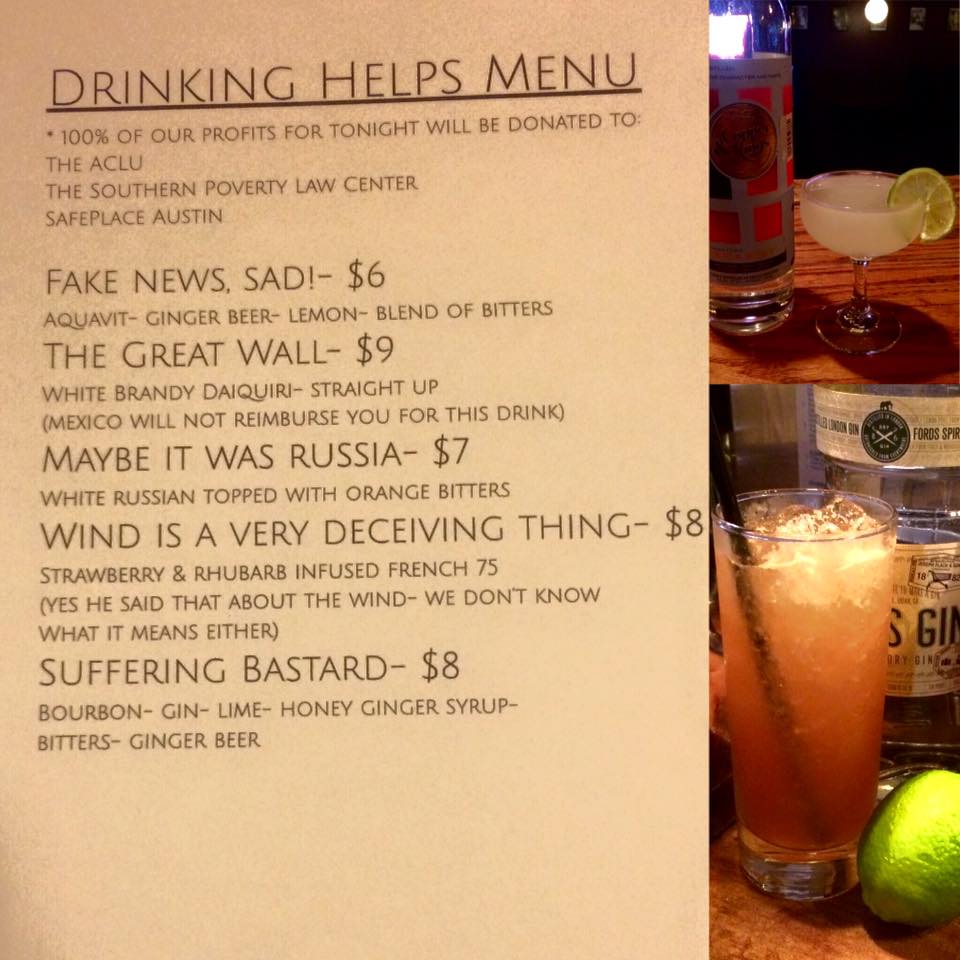 The Aristocrat Lounge announced earlier this week that it plans to donate 100% of the day’s profits to the following organizations: the ACLU, the Southern Poverty Law Center, and SafePlace. The lounge’s event, Drinking Helps, boasts a fun cocktail menu, new beers on tap, and tasty specials from Raymond’s Three Little Pigs food trailer located out back.

Rio Rita’s new location on 12th and Chicon is a hip café by day and a quirky lounge by night. Swing by Friday for a cup of Joe in the morning, or stroll on in after work for a few specialty cocktails. Either way, rest assured your purchase is valuable. The bar is donating 100% of the day’s profits to Out Youth, the ACLU, and the Southern Poverty Law Center.

Friday, January 20 Hopfields joins Bouldin Creek Cafe and The Aristocrat Lounge in donating the day's profits to organizations supporting human rights and promoting equality, values we hold dear and are prepared to defend in the coming years. 100% of profits will be donated to the Texas Civil Rights Project and NARAL Pro-Choice Texas.

Spend your afternoon enjoying delicious homestyle French cooking at Hopfields. Located on 3110 Guadalupe St., the comfortable yet classy spot will donate 100% of the day’s profits to organizations supporting human rights organizations and promoting equality. Announced via Facebook, the restaurant says the profits will go to the Texas Civil Rights Project and NARAL Pro-Choice Texas.

Where To Be Active

In the wake of a new President-elect, One Resistance Rally organized a community march up Congress Avenue. The event will “protest Trump’s politics of fear and hate.” The event is a “call the action to rally for justice and dignity for all.” If that resonates with you, head to Auditorium Shores at 5 p.m. The march will move towards the State Capitol then back to Auditorium Shores for a rally at 6:30 p.m.

If you’re looking for a night of entertainment, look no further than Elysium Austin’s event. Presented by Poo Poo Platter, Austin’s drag troupe, the event is meant to show support and “celebrate all the Nasty Women with an all female drag revue.” The event also features raffle prizes and a silent auction. Buy tickets online for $10 or at the door for $15. All proceeds go to Planned Parenthood of Greater Texas.

J20 UT is a coalition of on-campus groups and individuals coming together to stand with their neighbors. At 12:15 p.m. students across UT-Austin’s campus will hold a walkout in an effort to show solidarity with communities that face uncertainty and fear from the politics of an incoming administration. The demonstration will join the One Resistance Rally at 4 p.m.

Join students at the University of Texas Austin for a day-long series of workshops, or twerkshops, to protest Trump’s inauguration. Through twerking, the event hopes to encourage participants to “move together like Nasty Women,” claim their bodies as their own, and share strategies for self care. The event is sponsored by the University’s Center for Women’s and Gender Studies, and each workshop runs for approximately 75 minutes. Get your twerk on.

Show your support for the LGBTQ Human Rights Rally from 7 p.m. to 9 p.m. on the south steps of the Capitol. The event aims to demonstrate a commitment to preserving human rights and equality for all. A number of attendees, including state representatives, poets, and activists, will speak at the event as well.

State of the Uterus at Cheer Up Charlies 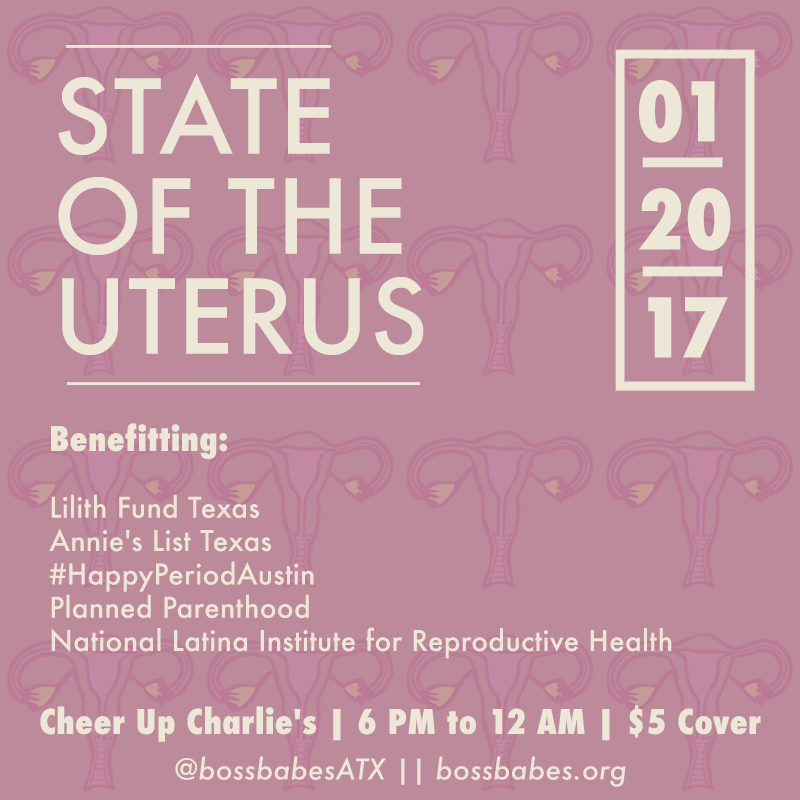 With a name like that, this is an event you won’t want to miss. The State of the Uterus was organized by BossBabesATX and is a fundraiser aimed to raise money for nonprofits invested in reproductive and menstrual health. The evening will consist of an all-babe music lineup, a political rundown from Austin’s Commission for Women, and the launch of #HappyPeriodAustin. Tickets are $5 and doors open at 6 p.m. #GirlPower

What A Joke at The New Movement

Laugh your sorrows away from 10:30 p.m. to 12:30 a.m. at The New Movement’s comedy show, What a Joke, a national comedy event meant to acknowledge Trump’s inauguration. Comedians from all over the world are joining together in the event, and Austin is one of just 29 cities hosting a show of its own. Purchase your tickets online for just $10. All proceeds go to the ACLU.

All of these events are leading up to the Women’s March on Austin this Saturday, January 21. The nation-wide event, slated for noon at the Texas State Capitol, is expected to attract nearly 30,000 individuals.