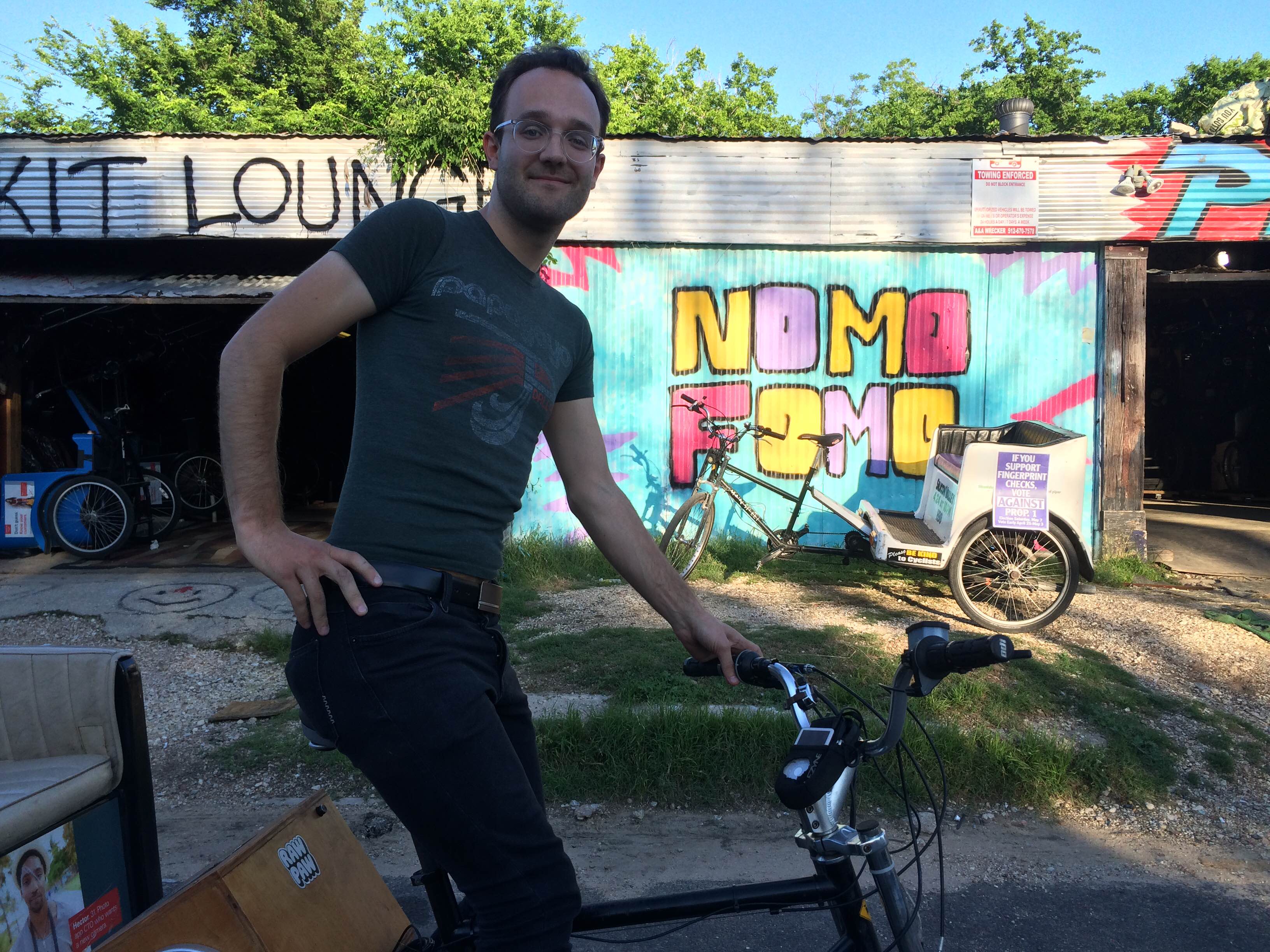 You see them downtown all the time. You watch as they weave between cars only inches from exchanging paint, jump curbs to get around gridlocked traffic and cart around happy passengers. Austin pedicab drivers, or “pedicabbers” as they call themselves, are roving fixtures downtown who transport people surprisingly quickly.

Let’s say you’re having a night on the town with someone special. You have dinner at Z’Tejas on West 6th Street, and afterward you plan to see a band at The Continental Club on South Congress. You parked your car near Z’Tejas, and you really don’t want to give up the parking spot, drive two miles and find another spot. You could walk, but it would take you about 40 minutes to get there.

It’s a nice night, so you want to enjoy it. A pedicab is a perfect option. You don’t have to hoof it the better part of an hour, and you can get to the show in 15 minutes. Plus, your pedicab driver is probably going to be an interesting and unique individual who can give you their own take on what you should do that night.

If you’ve never seen a pedicab, just imagine a rickshaw pulled by a bicycle. They usually have room for two people in the passenger seats, so they’re perfect for transporting a couple on a date.

Bradley Will is one of the pedicabbers you might encounter in downtown Austin. He describes himself and other pedicabbers as entertainers. “We’re going to work really hard, and a lot of us are entertainers, too, in the sense that we want to show people a good time,” Will told Austin.com. Photo: Bradley Will driving a pedicab before a Friday night shift.

All you have to do is ask your pedicabber to tell you a crazy story. Will has heard plenty of doozies from his fellow pedicabbers such as a pedicabber partying all night with passengers, another driving a penthouse dweller all the way up to his apartment (lobby and elevator included), and another having a large quantity of marijuana turned down by a person best described as Snoop Dogg’s weed screener.

Most pedicabbers are musicians. Chances are your pedicabber is going to be able to point you in the direction of some really cool live music on any night of the week.

Will is a bassist and synthesizer player who now mostly identifies his profession as a music producer. Will got into pedicabbing when he was a touring musician.

“I moved down here from Boston about four years ago, and I knew I needed a job where I could be flexible. I was in a very serious band up until recently, and I needed something where I could go away for long periods of time, come back, still have work and not upset my employers,” he said.

If you run into Will, it’ll probably be during a festival or on Friday and Saturday nights. With pedicabbing, you get to make your own schedule, and Will chooses to work the peak times. He averages about 30 miles of pedalling per 7- to 8-hour shift.

One piece of advice Will offers to first-timers pedicab passengers is to discuss the fare with the pedicabber before you take off. Some work just for tips, and others have set fees. You want to be on the same page with your pedicabber when it comes to fares because neither of you wants an unpleasant surprise at the end of the ride.

For car drivers sharing a busy street with pedicabbers, Will recommends constant vigilance. Pedicabbers ride right alongside automobiles and will weave through stopped traffic. “If we can fit through it, we’ll drive through just to get in position. Don’t rest on your assumptions of how traffic is going to work out,” Will said.

Hiring a pedicab to take you a few blocks or a few miles isn’t a cheap mode of transportation, but it is usually the fastest. On top of that, you’ll get to meet an interesting character like Bradley Will who can help you experience Austin.

—
Feature photo: Bradley Will driving a pedicab before a Friday night shift.