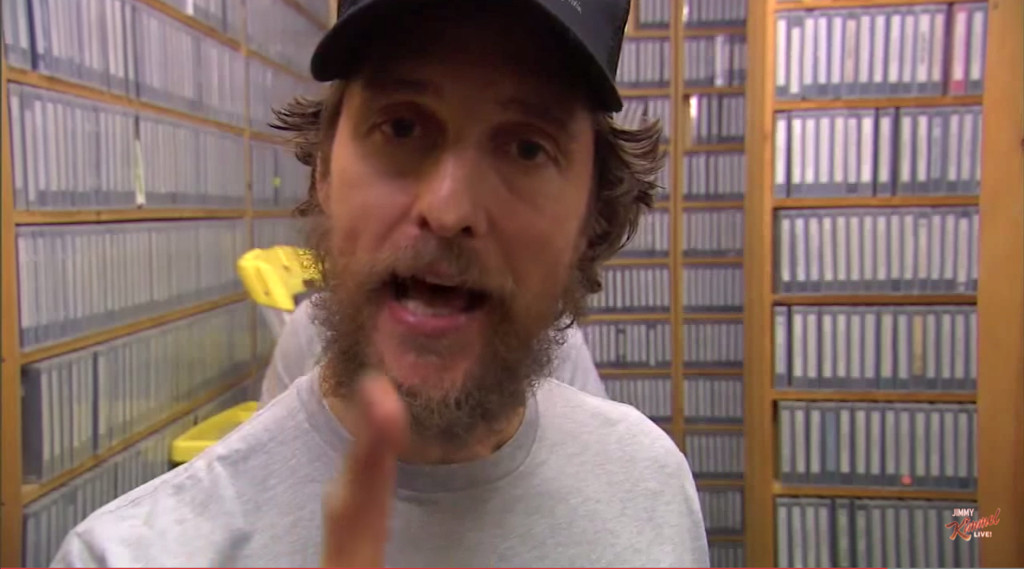 What with Austin’s largest annual festival going on and all, ABC late night host Jimmy Kimmel decided it’d be good fun to visit Austin and put some heat on a local business, which is awful nice of him. He couldn’t have picked a better spot with Vulcan Video.

What’s better, he brought a friend: Hometown favorite Matthew McConaughey, who engaged in some self-effacing schtick poking fun at his popular-but-easily-parodied Lincoln ads. Along the way, they did Vulcan a real solid with this national exposure. Helps that’s the ads they cut are pretty dang funny too. Also, educational! Watch it below…

So that was great. But here’s what we learned…

The One Austinite Who Still Rents VHS Recently Upgraded

What do you do with all these VHS tapes? Well, we had a guy, but…

It Seems Cool, But Streaming Movies Is Total Bullsh*t

If you just go to Vulcan, all those e-worms and Innernette viruses won’t be clogging up your tubes.

You Will Get Personal Service At Vulcan

Because he slept outside the store, Matt even got a 50 percent off coupon for “Texas Chainsaw Massacre: The Next Generation,” one of his *ahem* lesser films that will forever occupy a spot on the list of the worst films ever shot in Austin. Now that’s service!

Go rent a video and you probably won’t get towed while you chow down on something tasty around the corner. That’s a good deal when you think about it.

Driving From Far Away To Get A VHS Tape Is Cool

Matt drives 1.6 hours from Round Rock just to get his rental. What’s your excuse?

Where We’re Going This Weekend

It’s the only logical choice.

For more on Vulcan Video, check out their website.