Merging The Best Of Texas And Japan, Kemuri Tatsu-Ya Shines 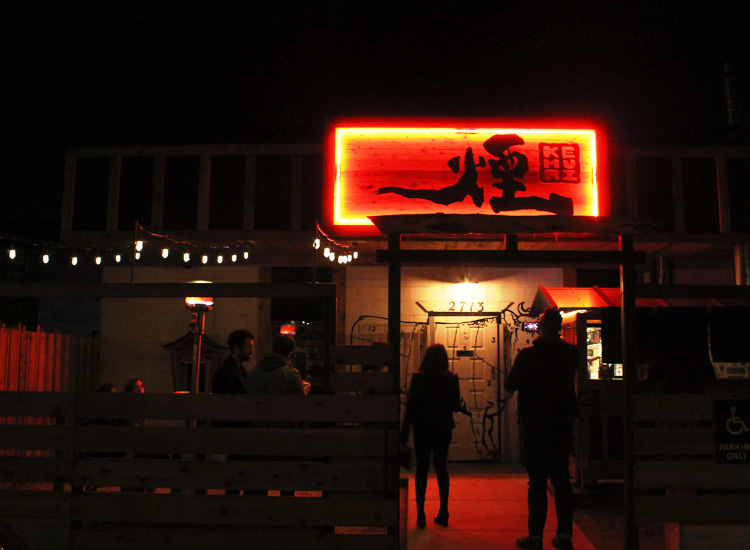 The fine folks behind Ramen Tatsu-Ya have forged a veritable ramen empire in central Texas. Their two authentic Japanese ramen outposts in north and south Austin are frequented by any and all craving one of the best authentic bowls one can expect to come by in not only Austin, but nationwide. So, it makes sense that they are expanding, but what they’ve just opened in Austin isn’t just a ramen shop. It may be one of the hottest new restaurants in the country, bar none. 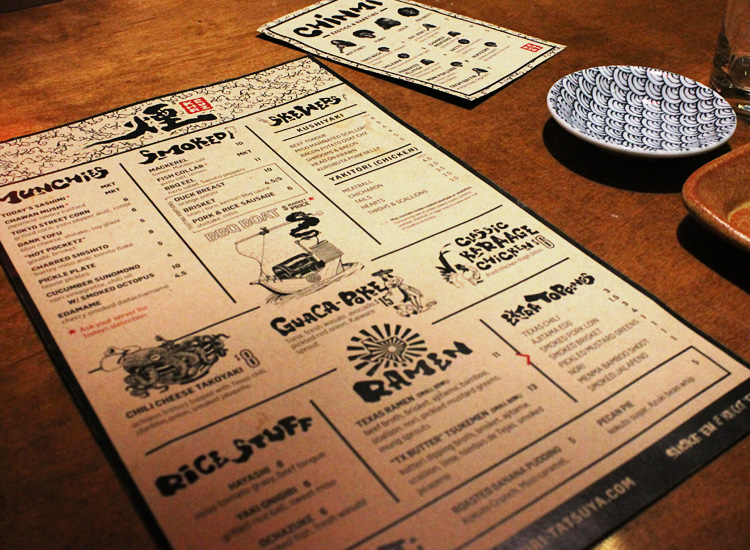 Kemuri Tatsu-Ya, their new concept, is commonly known in Japan as an “Izakaya.” While chatting with the Operations Manager, Shion Aikawa, he clarified by offering up a very swift comparison — this is, essentially, a Japanese version of a pub. Patrons that frequent such places are usually looking to eat and drink for a few hours after work, and regular Japanese Izakayas are known for an unparalleled variety. Kemuri stands by this ethos tenfold; dining there was one of the most exciting and immersive culinary experiences I’ve ever had. 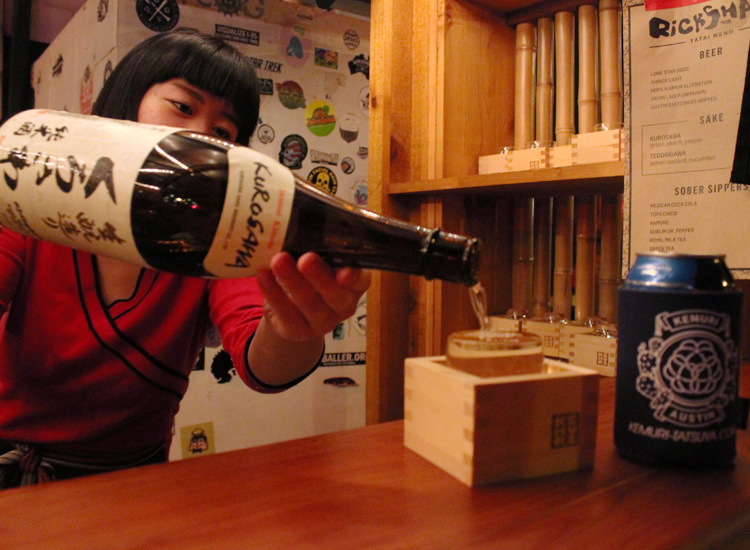 As you walk in, the space really unfolds on you. It’s almost cinematic in scope. Japanese and Texas antiques and artifacts adorn the walls from top to bottom. The decor is incredibly visceral and rich, telegraphing the food guests are about to experience. One look and you’ll know, you’re in for-Straight up Japanese Izakaya with the right amount of Texas flair. As grandiose and high-concept as the interior design was, I didn’t feel like it was overdone in the least. 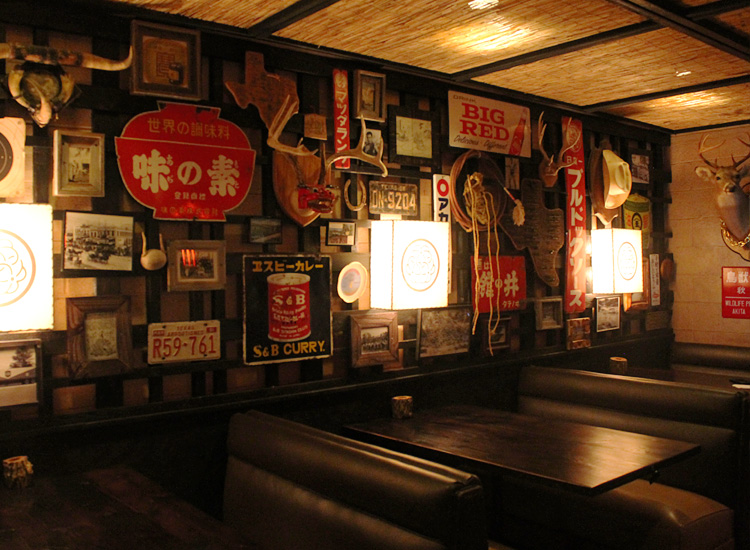 As we walked through the back door and out to the large patio where we were seated, the decor only lightened up a little bit. The opposite side from where we sat had two long tables beside a projector playing a Kurosawa film and resembled the inside, while the area we were seated was adorned with modern, warm japanese decor. 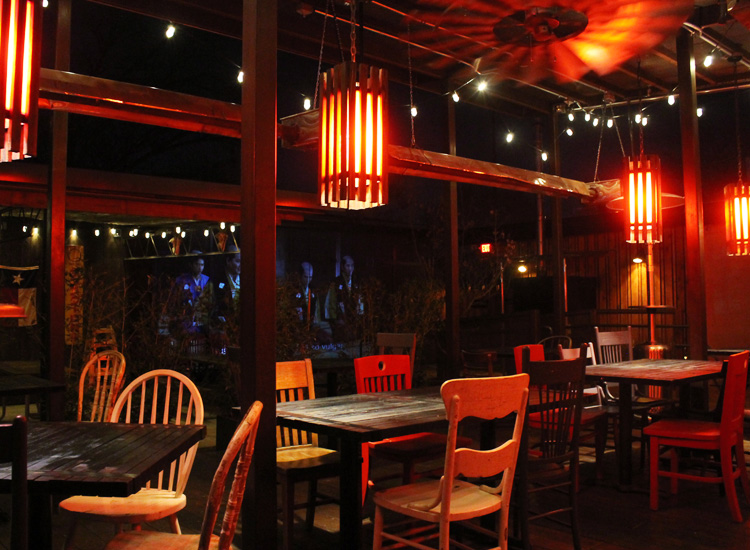 The cocktail and beer selection was, as you can imagine, very robust. Several sakes are available, and  the beer list is also dotted with a rice beer from Okinawa along with other more familiar Japanese beers like Sapporo. Of course, they also deal in Texas craft’s usual suspects, such as Hops and Grain’s Alteration. We happened upon the Golden Arrow, which, from what we could gather, was Kemuri’s take on a margarita, blending mezcal and ginger together beautifully. 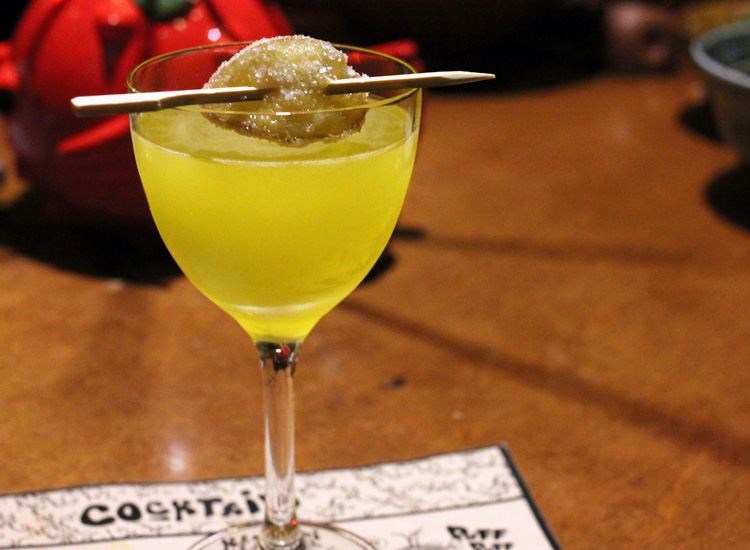 We also dove head first into the “Puff Puff Pass,” a fishbowl style cocktail that’s made for sharing with your group. It was strong but delicious — just don’t try and tackle one of these yourself. You might regret it! 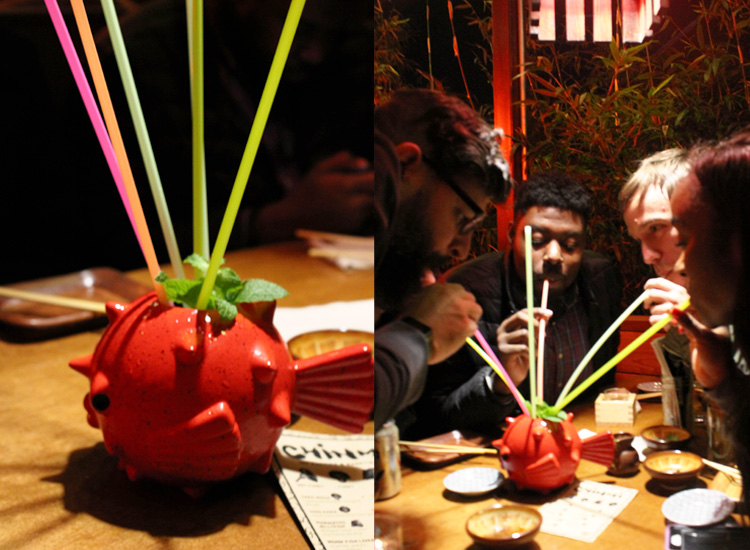 Small plates dominate the menu at Kemuri, and that’s not a bad thing. Before we knew it, a half dozen were clanking beside us. The “Hot Pocketz,” a tofu and brisket matchup with gouda and goat cheese, was the first of these preliminary go-to dishes to touch my lips. 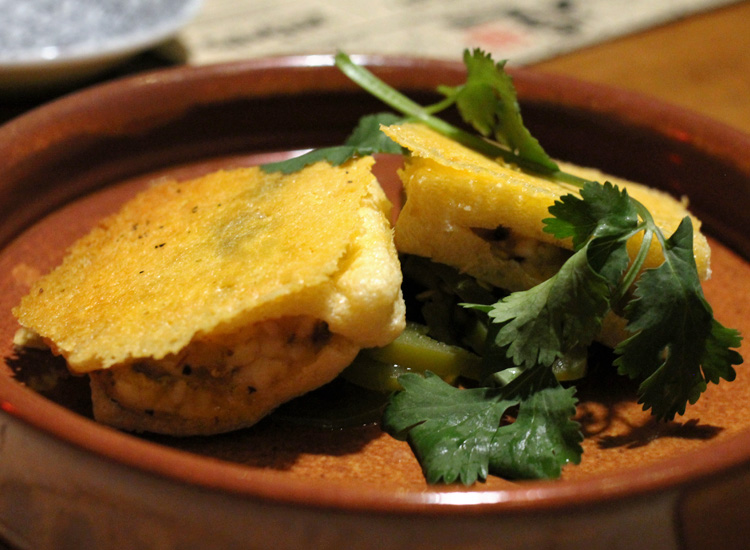 The Barbecue Boat was next, and it really felt like the cornerstone of the Kemuri experience. Brisket, Pork, and Barbecued Eel played alongside standard ‘que garnishes, like pickles, jalapeños, and onion. I love that you can get a nice piece of brisket at Kemuri, too. The old smoker from live oak, which is used to smoke all of the meats, is still cranking out some great stuff. The Guaca Poke was a tasty take on traditional tuna poke, heavy on the tuna and wasabi, reminding me of a varied ceviche. 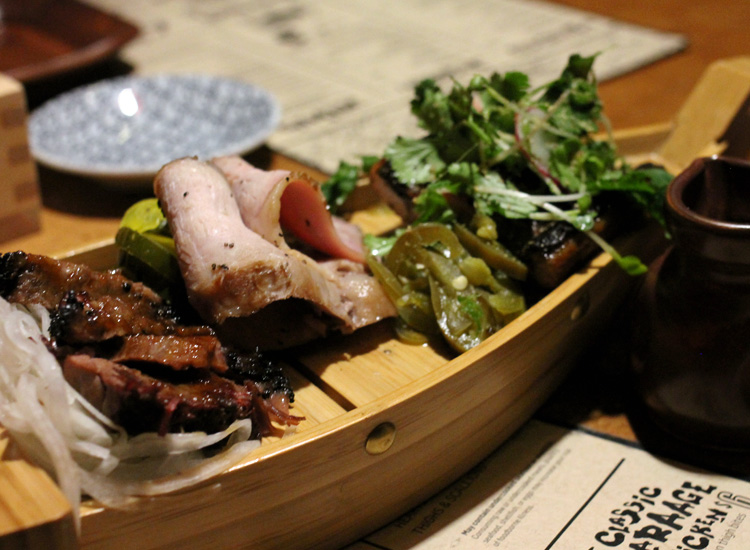 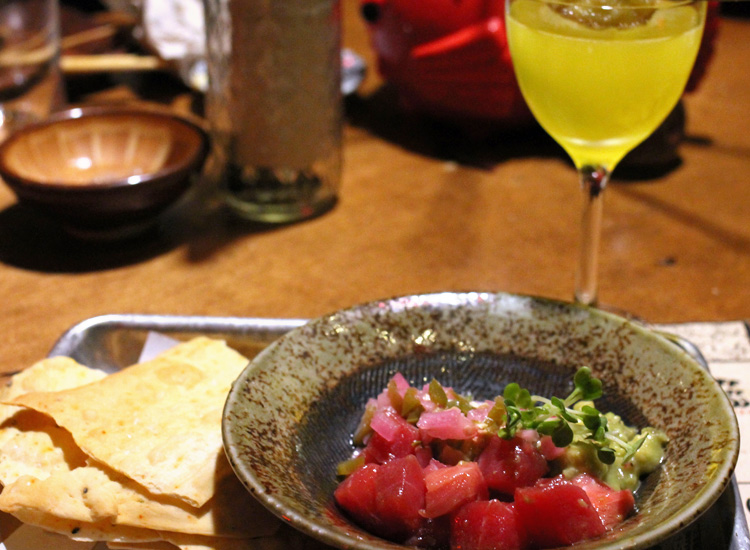 The Chinmi menu is a bit of an offshoot from Kemuri’s standard menu, so much that it stands alone on a separate heavy stock sheet. Comprised of exotic fare and rarities, the restaurant employs a gage to help guests stick a toe into strange waters. Dishes here range from “not funky” to “you nasty,” and what follows is nothing less than the most interesting tasting menu I’ve seen in Austin, any maybe anywhere else too.
Marinated jellyfish, octopus alongside chopped wasabi, and “Shio Kara” which means — and this is taken verbatim from the menu — “squid marinated in it’s own guts.” We tried each one of these reluctant delicacies, and every one of them was really tasty. The Tako Wasa, marinated octopus with chopped wasabi, ended up my favorite. The Ray Fin, though far less adventurous, was just as great. Don’t be scared of this menu. Go bold. 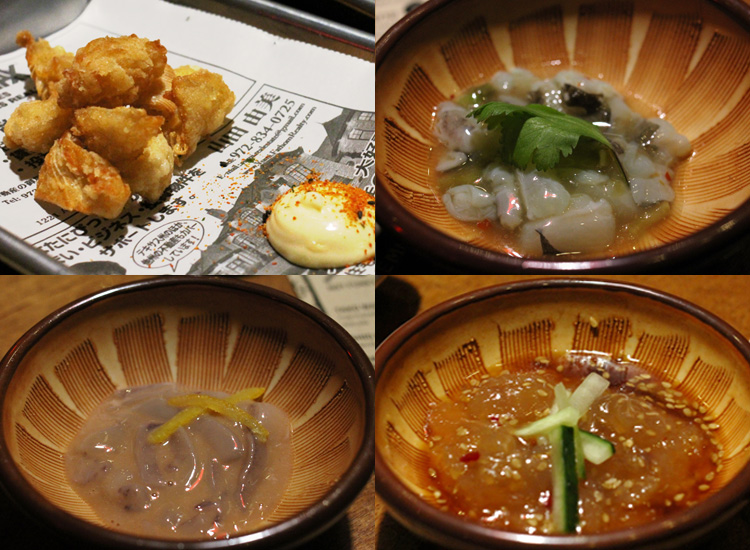 Soon after we tore through the Chinmi menu, more food awaited us. Fish Collar, which was exactly as it sounds (as in, the straight up fatty neck of the fish), was tender, salty, and out of this freaking world. It was so soft you could pull it apart, then it literally melted in my mouth. 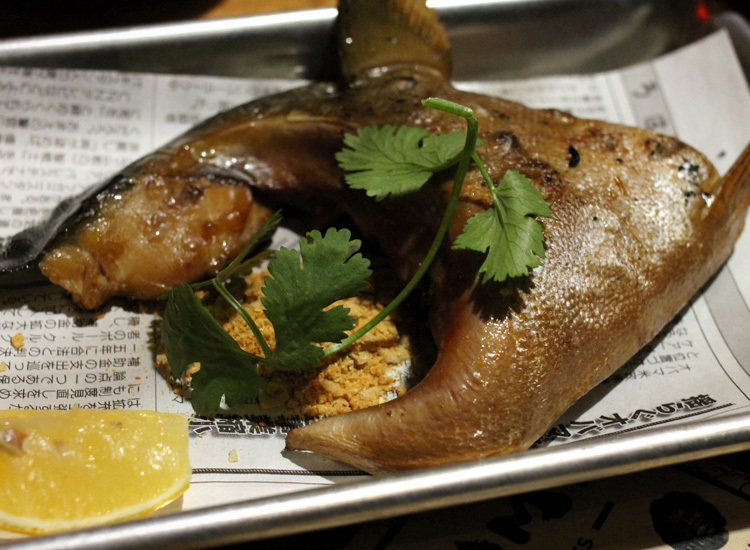 Next up, the duck breast with a side of orange ponzu, came out almost like a light marmalade and definitely made our must-have list. The beef tongue was tender and just the right amount of chewy, and packing a huge wallop of flavor. 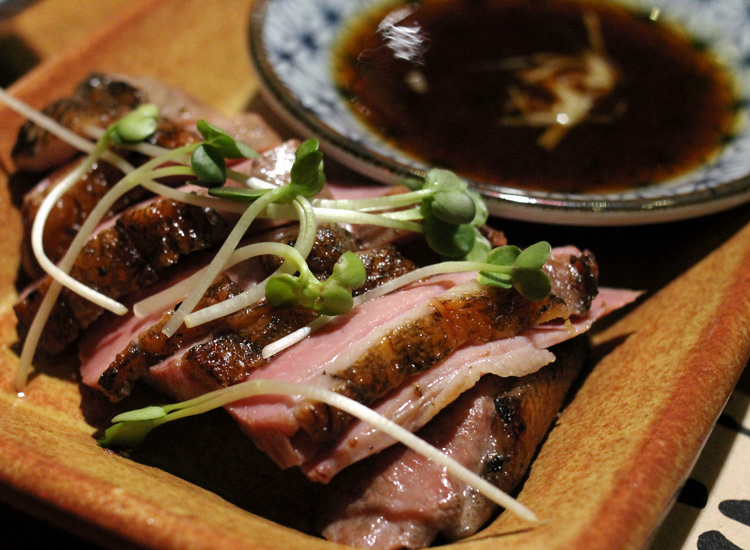 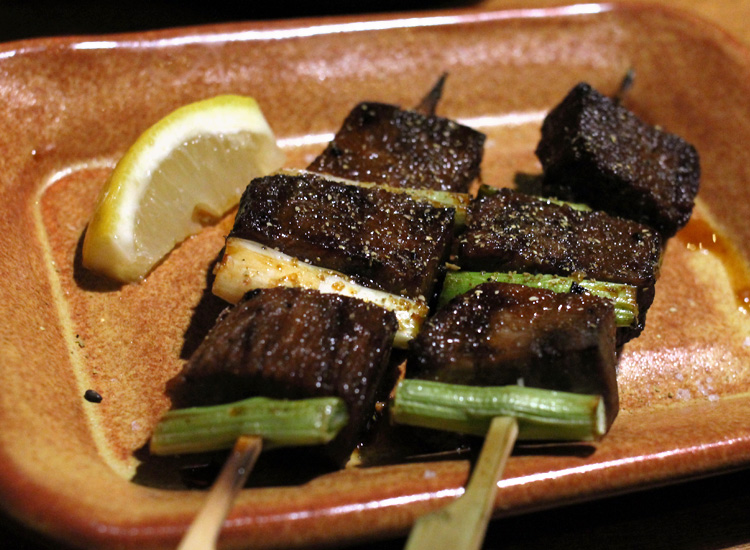 Kemuri Tatsu-Ya isn’t a ramen concept; even so, it’s imperative that you can’t leave a bowl or two behind. Kemuri offers two different bowls: a Texas ramen with beef broth and brisket, which is a little different than what you’re going to get at a Ramen Tatsu-Ya (the broth is a little smokier to pair with the brisket), and the Texas butter tsukemen is nearly the same recipe you’d get at either of their existing ramen locations. Both bowls are also a little smaller than those you’d find at the ramen shops. 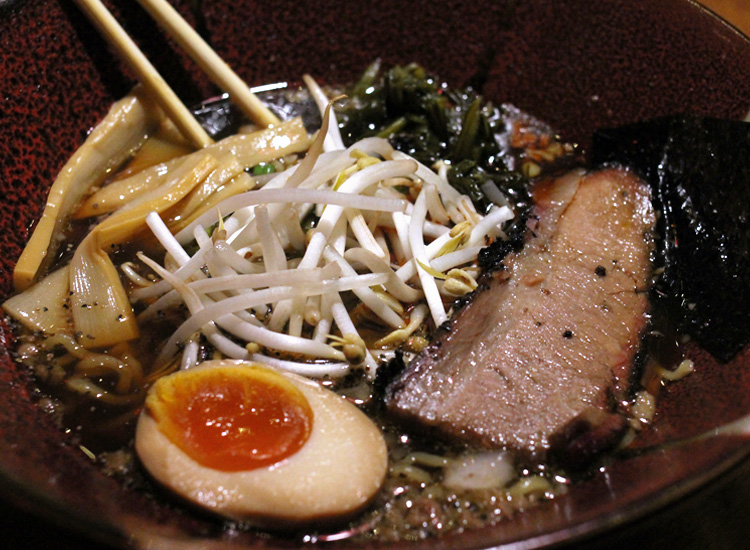 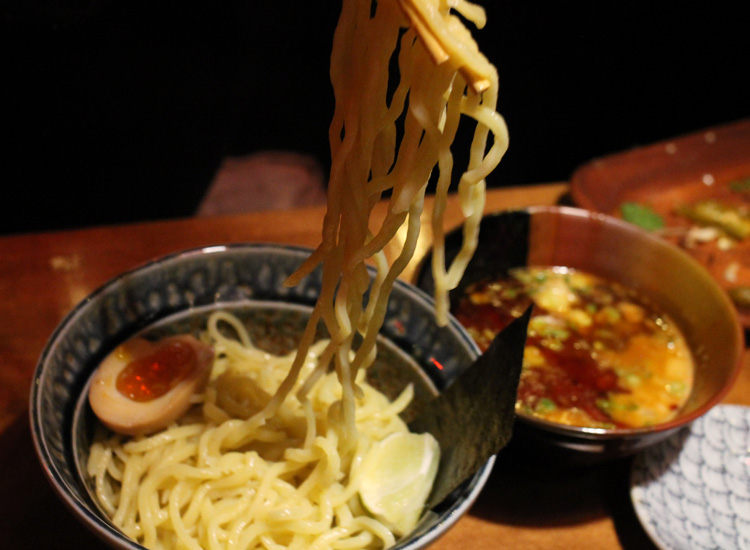 In the crowded Austin restaurant scene, Kemuri Tatsuya stands alone at the top of a very high mountain of tradition, fusion, and collaboration. If you’re looking for direction in the kitchen, or just a mind-blowing meal you will never forget, make sure your compass points true north to Kemuri. You won’t be disappointed. 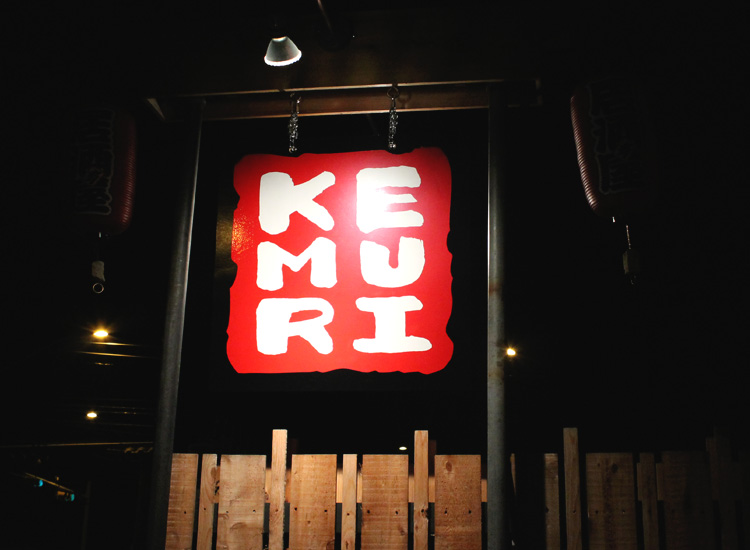