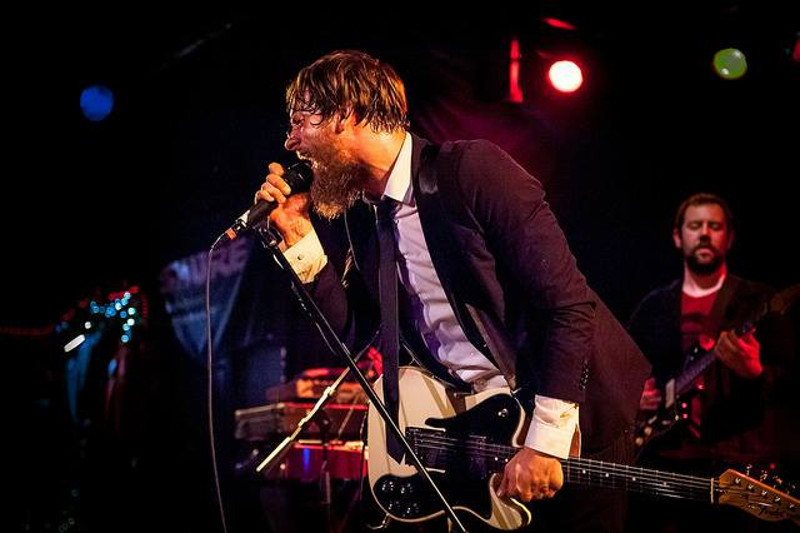 Quiet Company has become one of Austin’s most popular and well known rock bands, and it’s easy to see why. Just 10 minutes into any of their sets is enough to tell that this is a talented band that will be performing for the long haul. The band released their album Transgressor last year, and we were interested to hear about their songwriting process, so we caught up with Quiet Company during SXSW just before a small set at Maggie Mae’s.

Speaking with Austin.com, frontman Taylor Muse told us that the new album is “not really a collaborative effort,” since he did most of the writing. “I used to do most of the arranging as well, but now we’re kind of arranging together which can be really interesting and sometimes I’m really happy with it, and sometimes I’m not,” he said. “It’s really a mixed bag. Sometimes it’s a bit of relinquishing a hold on the creative process. I think for the most part it leads to more interesting arrangements.”

Another aspect of the band’s music and story that has caused controversy among  fans was the decision to move away from the group’s Christian roots. Many fans believe that Transgressor still incorporates religious themes into Quiet Company’s music even though the band no longer labels themselves as a Christian rock act. As Muse tells it, moving away from Quiet Company’s previous musical topics was just something that happened over time and he believes that lyrics can be interpreted entirely by the listener.

“A lot of people will come to me and say that they hear things [about Christianity] in Transgressor and I say, ‘Well, that’s interesting, because I didn’t put anything in there.’ I think the power of music is that a song can be about whatever you want it to be.”

As the frontman dives into his departure from Christianity, he gave honest answers while conveying a sense of freedom when describing his experiences with his music and religion. He noted  that he no longer discusses religion in his songs. “As you can probably imagine, when you grow up a certain way and in a certain faith, it’s kind of what you’ve been taught your whole life and you don’t just wake up one day and say “bullshit!” My experience with the church and faith has been overwhelmingly positive. I’ve always been a pretty straight-laced guy I think largely because of that.” “My whole social life was church,” he continues. “I meet a lot of people who want to talk about religion and want me to have this stance where I suffered some horrible injustice from the church, and that’s not my experience. People do have those, but that’s not my experience and I’m not going to pretend like I did. I miss church, the fellowship, and being a part of something bigger. With that said, transitioning away from that was not something I did lightly. It wasn’t an angry thing, I’ve just come to believe that these things are not true. But when you’ve got a lot of your identity tied into those things, you wonder ‘well what does mean for me now?’”

“The last record we wrote before Transgressor was a record called We Are All Where We Belong which is a concept record that deals with all of that. It said all that I wanted to say, it’s fifteen songs, we didn’t cut anything from it. It’s just ‘here’s what I want to say.’ We are really proud of that lyrically, and I think it’s my strongest work. But after we made that record we never wanted to make that record again.”

Moving away from Muse’s personal story led us to have a discussion on what it’s like to be a musician today in the digital world. We focused on the topic of streaming, something that a small act like Quiet Company cannot avoid. “I almost don’t know if it matters what our opinions are about streaming, because no one asked us what our opinions were about streaming when they made it, and now it’s just the norm. I don’t think it does a lot of good to bitch about it either, but it is what’s happening. As a consumer I’m a big fan because it’s very consumer orientated, since it’s super convenient and super easy. I have a Spotify account and I use it a lot. I enjoy listening to records that I already own, and while that might be double dipping for some bands, our fans tell us that they do that a lot for us as well, and we always really appreciate that. I don’t know if it’s the future. It’s no secret that its devalued what we do and no one else would like that happening to their job. There is no use complaining about it. Now you just have to say ‘how can you use it to do what you love to do.’”

In addition to our discussion of modern music consumption, we also wanted to highlight Taylor’s love for his craft as he very enthusiastically told us about the groups he loves, what songs he wishes he had written, and ultimately what music means to him.

Pulling from Queen’s discography he tells us that he would have loved to write “Bohemian Rhapsody” and “Mr. Blue Sky” by ELO, as well as a number of Beatles tracks, with him adding “I hear songs all the time where I think “God, I’d wish I’d written that!”

“A lot of my favorite bands are bands that we actually know and play with. We just got off the road with this band called The Kickbacks from Chicago, and throughout their show there are so many moments that you’re just challenged by and when they walk on stage you feel like you have to step it up.”

Further in our discussion, Taylor details how he loves watching bands on stage where there is something dangerous about them, saying “there should always be something visceral and powerful that feels a little bit dangerous. That’s rock and roll to me. I don’t think that there’s any record in the world where people say ‘I really liked that record because of the safe choices that that band made.’”

To end our interview, we wanted to know what was next for Quiet Company and any upcoming plans.Taylor told us that the band has plans to do some regional touring as well as to record new songs for a follow up to Transgressor. After speaking with Taylor we cannot wait to see what the band comes out with next as they write brilliant, striking, and heartfelt songs.

You can watch the music video for “Seven Hells” off of Transgressor below.

You can read more of Lauren Gribble’s interviews over at her website Listen Here Reviews.