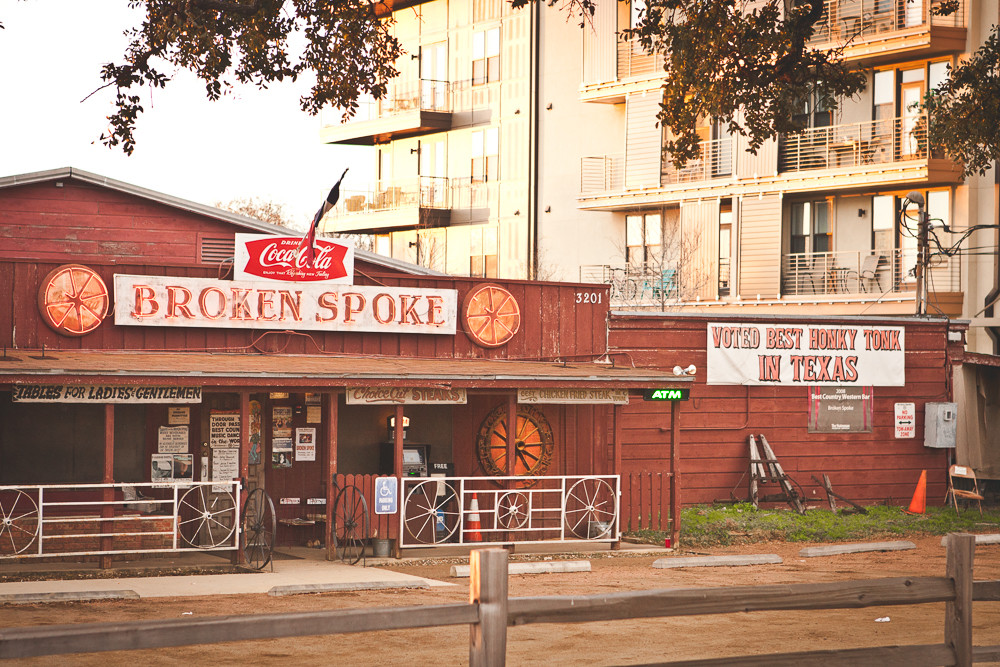 For A Microcosm Of Austin’s Exponential Growth, Look No Further Than Broken Spoke

The Broken Spoke isn’t much to look at from the outside, despite its status as a storied and treasured Austin landmark. But to newbies, it’s an oddity that sticks out like a sore thumb, and that’s not all they’re overlooking.

What’s even less apparent about Broken Spoke to new Austinites is that it represents a perfect microcosm of how Austin has reacted to its exponential growth in recent years.

Sure, the big oak tree out front is impressive. You’d have an army of environmentalists standing in your way if you even thought about taking a chainsaw to it. The parking lot is gravel worn down to mostly dirt, and the building is squatty… Which is just what you would expect from a legendary Texas dance hall claiming to serve the absolute best chicken-fried steaks anywhere. Until a few years ago, the Broken Spoke sat among a row of similarly diminutive buildings with parking lots resembling lumpy gray quilts made from square asphalt patches. Now, the iconic honky tonk is juxtaposed between two multi-story, mixed-use buildings, each with their own parking facilities. And this is not exactly redneck housing, leaving a contrast that couldn’t be more stark.

This spot on the east side of South Lamar Boulevard perfectly displays the angst-ridden way in which Austin grows. The old landmarks remain, but their immediate surroundings change. Ostensibly less important old structures are torn down to make new ones that accommodate more people. Things get a little tighter, a little more compressed, and for some, a little claustrophobic.

The Broken Spoke’s parking lot doesn’t get the same sunlight that used to beat down on it. The five stories on three sides ensure that. Patrons have a nicer place to park, but have you ever tried to fit an extended cab pick-up in a parking garage? It’s no easy task.

Still, Austin has to grow. When anti-growth crowd dug their heels in — and planted their heads in the sand — in the 1980’s and 1990’s, they set us on a course for more painful growth. People still came, and they continue to migrate here despite increasing traffic, taxes and home prices.

As more new Austinites come, honky tonkers will get used to maneuvering their trucks in parking garages, and condo dwellers will learn to like fiddles and steel guitars. That’s just how it’ll have to be in Austin for the foreseeable future.

Then again, that’s more or less how it’s always been in this town. We’re famous in part for mashing rednecks and hippies together in beautiful harmony. So, at least some things never change.