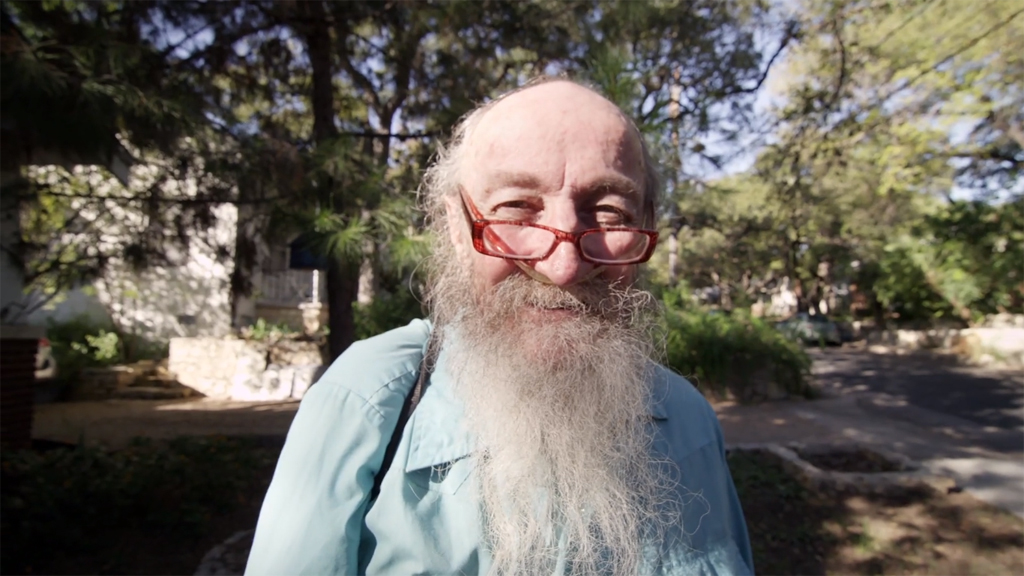 If there’s one person in Austin who seems to have stepped into the city’s Weird spotlight after Leslie Cochran’s untimely death in 2012 it’s Crazy Carl Hickerson, a bearded, flower-spinning free spirit with unusually large man boobs that he loves showing off.

Leslie’s death affected many of us personally after years of feeling inspired by his passionate political activism, his friendly persona, and of course, his immaculate fashion sense. Austinites loved Leslie so much that we raised $41,000 to help make a documentary about him, and we’re even building a statue of him downtown.

Leslie wouldn’t want us to sit around and sulk about Austin’s steadily-increasing normalcy. He would want us to get out there and be the weird we want to see in our beloved Austin. And he would definitely want us to appreciate other brave souls who are already fighting the good fight. This is why Austin needs a figure like Leslie; someone who carries that torch and defines Austin’s sense of what’s really “weird.”

For all intents and purposes, that guy is Carl, but too few know that he was here weirding it forward WAY before Leslie rolled into town on a tricycle in 1996. Even many longtime Austinites don’t know this, but the fact is that Carl has been perfecting his profession in the preternatural since the 1960s. Along the way, he also ran for elected office in Austin 10 times.

If you’ve ever been to Esther’s Follies, you’ve probably seen more of Carl than you expected or wanted to. He’s most often spotted outside Esther’s downtown, spinning and selling chrysanthemums, dancing provocatively (sometimes while in a kiddie pool on the sidewalk), and of course flashing his man boobs to anyone on 6th Street daring enough to not look away in puritanistic horror.

Now, thanks to local film company Beef & Pie Productions, Austin’s original King of Weird is getting a documentary of his own. An event poster for the premiere of Crazy Carl And His Man Boobs.

“Carl lives in central Austin across from my film partners, Andrew and Karen Yates,” Beef & Pie Director Mike Woolf told Austin.com. “Andrew kept seeing him outside in his tighty whiteys and said we should do a documentary on him. We made the film because we saw it as an opportunity to tell the story of how Austin got its groove… and how to make man boobs!”

They’ve appropriately titled their film Crazy Carl and His Man-Boobs: An Austin Love Story, which was funded by a Kickstarter campaign that raised $14,000 from Carl’s fans and longtime Austinites. They plan to release the film online and make it free for all to enjoy.

Watching the film online is great and all, but Jo’s Coffee is hosting a community screening on Thursday, June 25, 2015 at the company’s South Congress location. The show will open with live music from local band Shinyribs, and features food and drink specials courtesy of Jo’s. General Manager Chuck Lindsey told Austin.com he expects an enthusiastic turnout, and considers the screening an ode to Austin’s colorful history and a celebration of someone who has entertained and uplifted Austinites for years.

“We like to show movies here at Jo’s that align with our culture as a company and as individuals,” he said. “We have been open since 1999, and many of us that work here can remember what South Congress was like back then. We love the growth that Austin has seen over the past few years, but we also feel it’s important to remember where we came from. That is what Crazy Carl and His Man Boobs represent for us: A glimpse into the culture of the city, and the personality of one man that helped carve out Austin’s weird little spot in the heart of the big state of Texas.”

It’s a safe bet that Carl will be present for the screening on Thursday, in case you want to meet him. It’s an experience you won’t forget. Meanwhile, check out the documentary’s official trailer below…