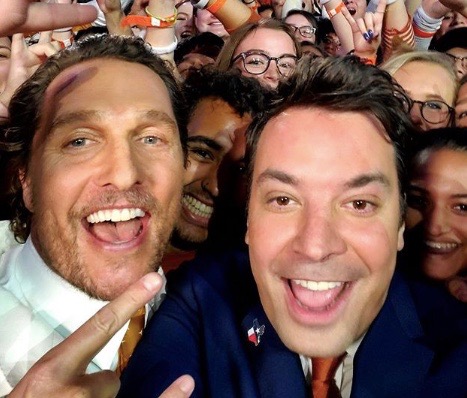 Jimmy Fallon Gets His Texas On

Even before the day of his first ever college campus show, “Tonight Show” host Jimmy Fallon was all over Austin. He posted videos and pics on Instagram from 6th Street, Hole In The Wall, Veracruz, and smack dab in the middle of the stadium, most of which were featured in the show’s “Thank God I’m a Country Boy” opening number. In case you’re living in a hole, guests for the big UT show were Professor Matthew McConaughey, Chip and Joanna Gaines, and musical guest Gucci Mane, who performed a trap version of “The Eyes of Texas,” which we’re still confused about.

Celebs Feel the Need For Speed

F1 weekend celebrity sightings were a bit slim this year but there were still a few of note. Trevor Noah stopped by the track in between his Friday and Saturday night sets at the Bass Concert Hall. Matthew and Camila made a pitstop at the race on Sunday to cheer on their friend Lewis Hamilton. And Michael Douglas was sighted multiple times throughout the weekend both at the track and at the Fairmont Hotel.

And that’s not his only big news this week. He also turned the big 5-0.

Also out this week, the historical drama Midway. The film tells the story of the epic battle in the Pacific that followed Pearl Harbor and served as a turning point for World War II. Among the star studded cast are three Texans: Dennis Quaid, Woody Harrelson, and Nick Jonas.