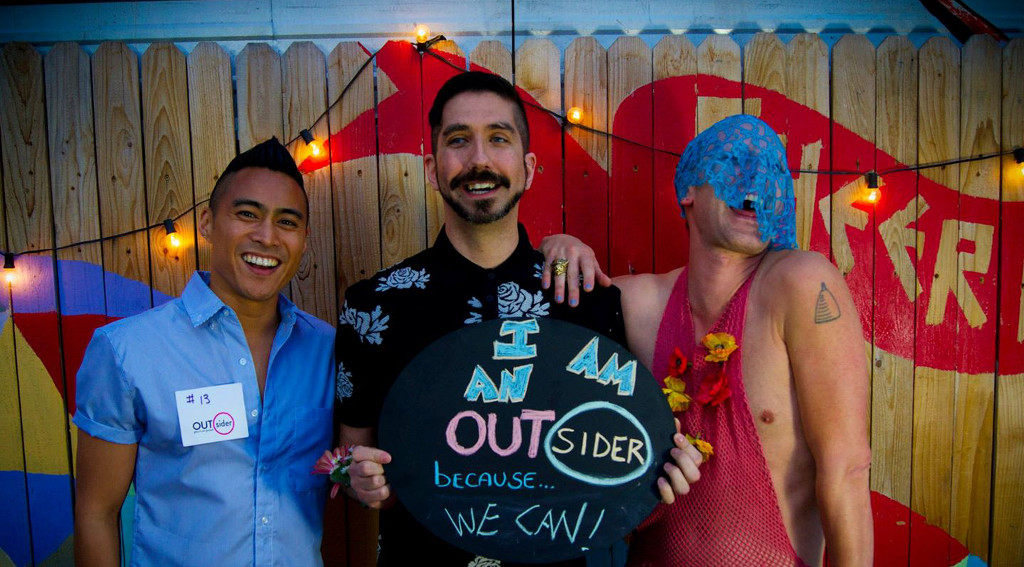 Inside OUT: Austin’s Newest Queer Fest Sharpens The Edge

Austin is a city of festivals, and its newest celebration hits the town this week. The OUTsider Film and Arts Festival makes its debut February 18-22, showcasing art not often seen by mainstream audiences. With a focus on queer art and artists, OUTsider’s tongue-in-cheek name belies the depth of programming on tap at the inaugural festival. From documentary film to in-home conferences and quirky happenings, OUTsider hopes to entice both seasoned arts veterans and curious folks new to the scene.

Although Austin seems to be saturated with arts festivals, OUTsider artistic director Curran Nault (pictured above, center) — who recently appeared on Day Drinkin’ with Arcie Cola and Austin.com — believes there is plenty of room on the calendar.

“Austin has always had a rich queer and creative community, but in the past few years it’s really taken off,” he said. “This is a community that prides itself on being ‘oddball’ and ‘outside the industry,’ so something like OUTsider, which embraces the outcast and is fiercely independent, is a perfect fit.” Nault believes that one of OUTsider’s unique strengths is its inclusive approach to what many see as an exclusive environment. “As a multi-arts festival, we’re all about creating dialogue and exchange between different types of artists and audiences — folks who are often kept in distinct festival boxes and seldom have the opportunity to interact elsewhere. Our hope is that OUTsider will be a space of discovery, inspiration, and sustenance.”

The festival aims to attract audiences looking to connect with work that speaks to the universality in the human experience, not just patrons who personally identify with the queer experience. “Most of us are outcasts in one way or another,” he said. “There is something powerful and relatable in that, and I think it can be a starting point for understanding and admiration.”

People also love to be the first to “discover” something cool, which is why OUTsider’s programming shines a spotlight on the bleeding edge of what’s hip. “We won’t be touting the latest celebrities and trends,” Nault said. But, he added, the festival will still introduce audiences to some “wild and wonderful stuff.”

To that end, here are the events I am personally looking forward to. Careful: These aren’t for anyone who refuses to take a walk on the wild side…

Opening night with performance artist Narcissister — Haven’t heard of her? America’s Got Talent has!

On Fearless Love: Prumsodun Ok and the Art of Khmer Classical Dance — A young artist breaths new life into an ancient dance form almost destroyed by war and genocide.

Overheard — Poet and performer Kirya Trabor embodies a diverse cast of characters on a subway journey across NYC.

Visit the OUTsider Festival website for a full schedule of events and admission information.