Here are 15 Places with Holiday-Inspired Drinks You Cannot Miss

It’s time for the holidays, and that means a whole array of indulgent flavors that aren’t necessarily around throughout the year. That means eggnog, bourbon, hot chocolate, peppermint, and so much more. Our palates are as excited as a kid on Christmas morning to be able to drink our way through the specialty drinks that Austin bars and restaurants have to offer. Here are a few of our favorites that include booze, no booze, or booze optional.

If you’re looking for traditional flavors in non-traditional forms, Dolce Neve is offering up some special items. Their eggnog gelato can keep you in the holiday spirit while helping you brave the unseasonal Texas heat, while their housemade hot chocolate can keep you warm when temperatures dip.

Feeling the holiday vibe. Eggnog gelato, with organic cinnamon, nutmeg, and a little bit of rum

Shake Shack didn’t put this frozen delight in the name of its restaurant because it messes around in that department. Nope, the frozen custard in a cup confections are taken very seriously here, especially around the holidays. Their holiday shake trio includes Pumpkin Pie, Chocolate Peppermint, and Christmas Cookie. Good luck choosing one. They’re also featuring their Brownie Batter Hot Chocolate through March 31, featuring a blend of bittersweet dark chocolates and rich fudge sauce, topped with whipped cream and chocolate sprinkles. Whoa.

They’re also hosting holiday giveaways on Instagram until December 20, so get busy socialing!

Another booze free treat is the Holiday Horchata + Espresso at Cuvee Coffee. The coffee kick comes with just the right amount of creamy, frothiness, making this a treat you’ll want to add to your weekly rotation while it’s still available.

We can never resist a punny name, and a Hot-Apple Sidecar is just what the doctor ordered to warm up while shopping down on South Congress.  It’s filled with house-made mulled apple cider, Grand Marnier, an apple slice, and a shattered cinnamon stick. And bonus points: this one can be made booze-free for the kiddos or the preggos in your group.

You look like you could use a little spice in your life. Guess what? This hottie comes alcohol-free, too! #HotAppleSidecar

This hot chocolate also goes both ways — either with or without booze. Adults can choose to add either Stoli Vanilla, Ancho Reyes, or Avion Espresso to their milky mug for a nice, warm booze hug. And yes, you’ll look just as adorable and happy as this guy as you sip on this decadent drink.

Y'all liked our Tres Leches Hot Chocolate so much that we brought it back this weekend! Pairs perfectly with Mexican blankets, cozy heaters, and Christmas dècor! #TexMex #Austin #ElChile #HotChocolate #mexicanblanket

Yep, Contigo has an entire menu dedicated to hot drinks, including the very festive Branca-Menta hot chocolate. There’s also the Pimm’s Cobbler which is basically a blackberry cobbler in a cup, and there is nothing wrong with that. Booze-free options include a hot chocolate and an apple cider.

6 Weeks of Eggnog at Péché

Oh my word, eggnog lovers, had Péché got something going on for you… Their “6 Weeks of Eggnog” features a different bartender’s variation of eggnog weekly (Monday through Sunday). To give you an idea, they started with week 1: bar manager Shaun Meglen’s Eggnog #1, made with James E. Pepper bourbon, Art in the Age Gingersnap Liqueur, cinnamon syrup, whole egg + cream, nutmeg, vanilla bitters and brûléed fig foam. Swoon! They’ll also have a spectacular Christmas Tree Cocktail — Botanist Gin, lime, St. Germain and a rosemary sprig drizzled with chartreuse and lit on fire.

OK, so maybe this beer from the Houston-based brewery isn’t an Austin creation, but we just loved the name too much to pass up putting it on our list. You can find it at local watering holes like The Mohawk. Just be careful not to drink too much, or it might leave you feeling a little fra-gi-lé (it must be Italian!) this holiday sesaon.

Speaking of The Mohawk, let’s not discount the rest of their holiday spirit menu that includes their Spiked Cocoa and their Holiday Milk Punch that contains all the holiday flavors you’ve been searching for — Southern Comfort, milk, vanilla, and nutmeg. Grab a glass and cuddle up with their grizzly by the fire and you’ll be good to go.

Spiked Hot Cocoa by the fire is the perfect cure for those Monday Blues. Happy Hour today from 5-8pm. #MohawkAustin

Yes, you read that correctly — Opal’s has a flaming eggnog. It’s filled with Captain Morgan spiced rum and Patron Citronage mixed with eggnog and served tableside. If you’re not feeling quite that adventurous, they’ve also got an extensive menu of “warmers” that includes a Spiced Buttered Rum, Spanish Coffee, Hot Toddy, Chocolate Kiss, Café Mole, and Irish Latte. You can find these at the Marina location, as the liquor stocks are getting depleted ahead of the Penn Field location’s December 31 closing. 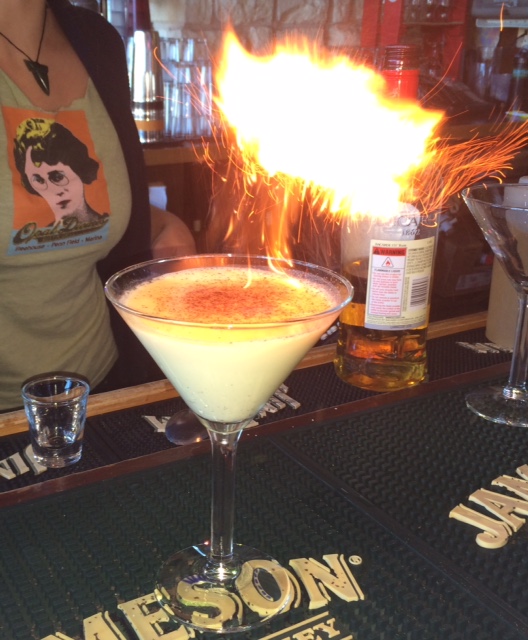 Alright princess, this martini — featuring Milagro Silver tequila, fresh lime juice, and a holiday fruit simple syrup made with plums, apricots, figs, and cardamom —  will have visions dancing in your head all night. In the best way possible, of course.

We are open on Christmas Eve this year! This #SugarPlum Martini created by @dimastexas will be our special for the night. Come try one before seeing @balletaustin's #TheNutcracker at the @longcenter or after shopping at the @armadillobazaar! Open 10am – 9pm. ¡Feliz Navidad! ?✨?✨ Milagro Silver tequila, fresh lime juice, and a holiday fruit simple syrup made with plums, apricots, figs, and cardamom. ?

The combination of cocktail lounge/beer garden/smokehouse make Freedmen’s a great place to grab a drink, and their festive holiday cocktails are great drinks to grab. Their specialty menu includes The Fiddlers Flip (a take on an eggnog that includes Guinness syrup), the apple-cinnamony Salé Sucre, the Sucker Plum, and the Pommasala. 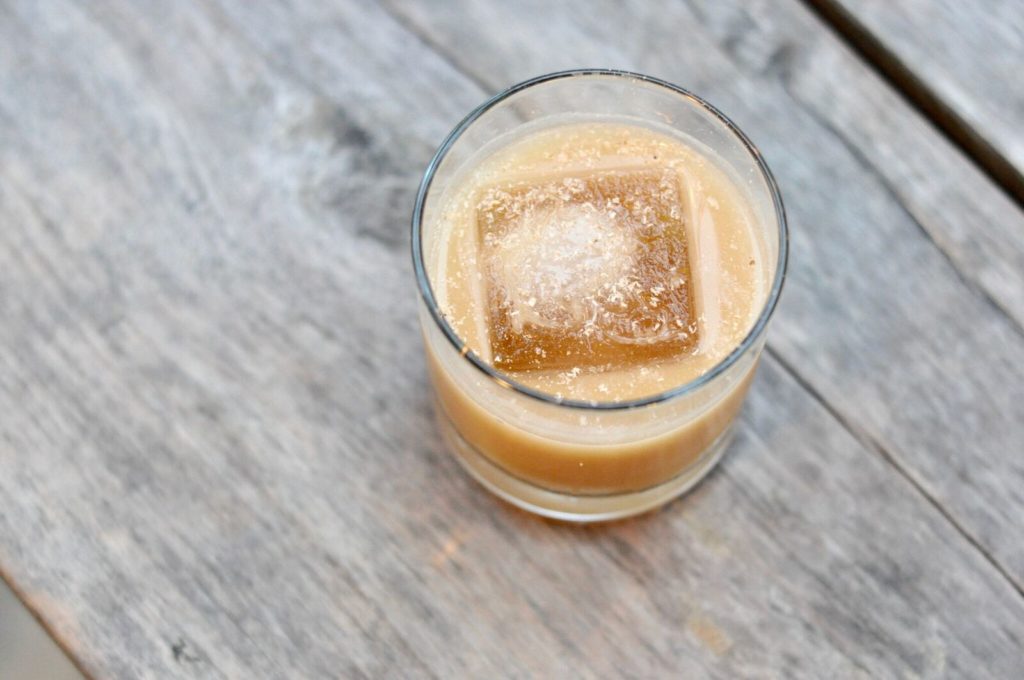 Adding a little bit of holiday spice to this classic drink makes us believe that we can, in fact, make it through the holidays. Grab a quick drink before heading out to the office Christmas party so you can actually handle Nancy from accounting’s stories about her new cat.

Of course, celebrating the end of one year and the beginning of the other is a special part of the holidays, and to give a nod to the mess that was 2016, Alamo Drafthouse and Independence Brewing have teamed up to create a limited batch hazelnut porter. The winter warmer is available at all Texas locations of Alamo Drafthouse and will be available through the season, while supplies last.