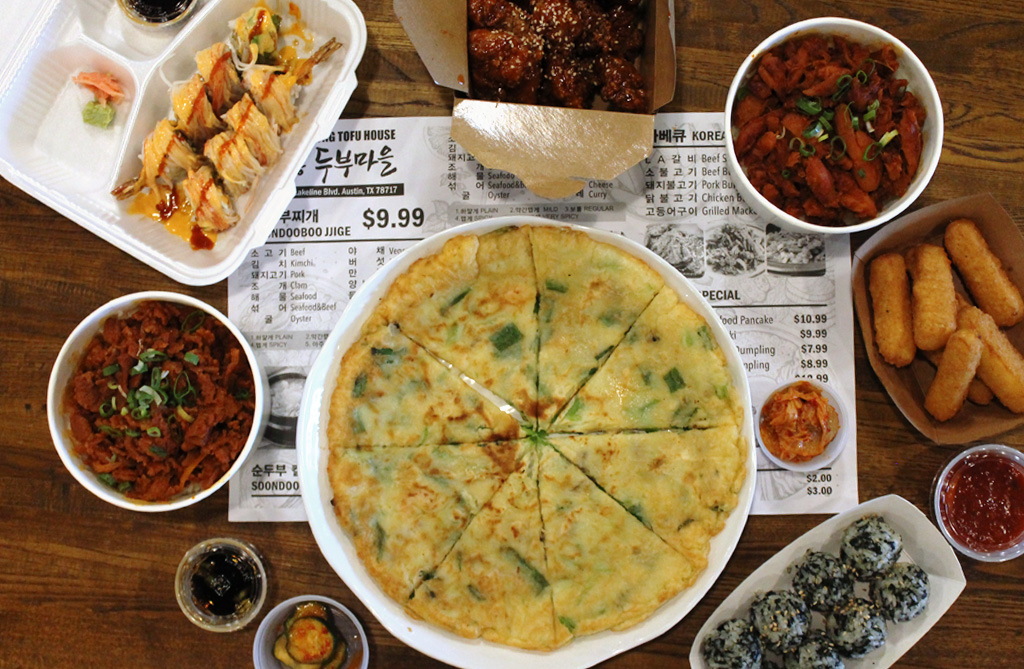 The way other cultures address and live in the moment when it comes to dining and retail is really interesting. When I found out  H-Mart was coming to Austin, it was a really exciting time for me because I don’t have many experiences at places like this. A grocery store with an accommodating food court, each stall giving the end user a different experience, means that almost any Austinite can find something that they’ll love. 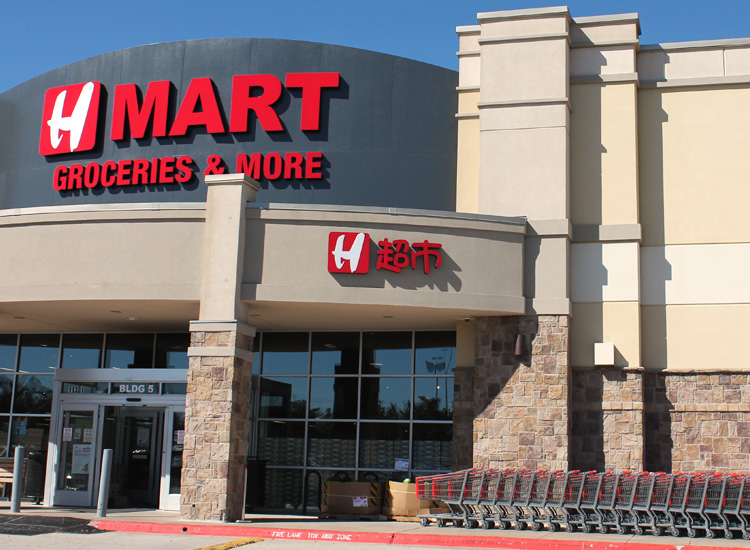 For those unfamiliar, H-Mart is a Korean supermarket chain that has spread its influence and presence throughout the U.S. With locations in 12 states,  it’s a very unique cultural experience, especially for a chain supermarket/grocery store. I went on a weekday so I could do my best to sample as much as I could in the market eatery, H-Mart’s ever so sprawling food court. 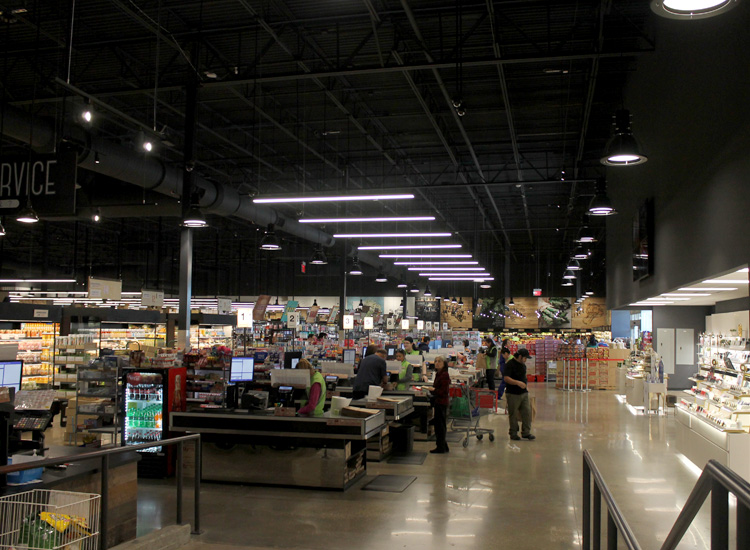 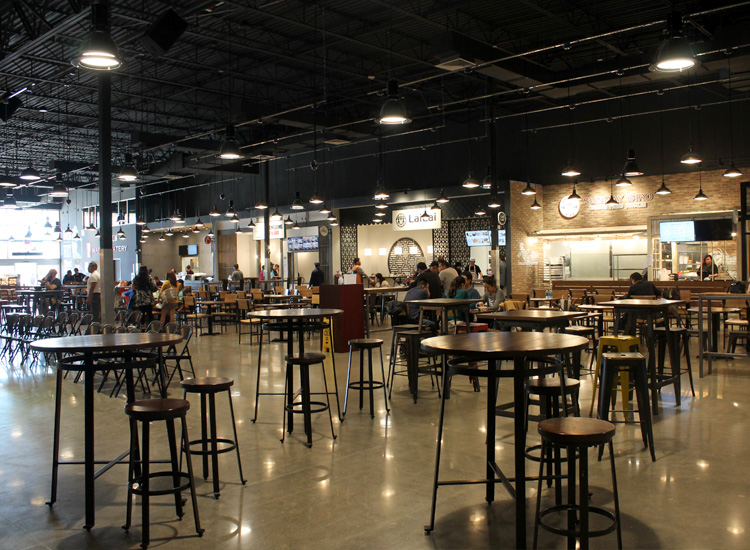 Trying to figure out what to order first was a bit of a challenge, everything looked delicious and interesting. The first stall I felt necessary to sample was renowned Bay-Area chef Dueki Hong’s Sunday Bird, which had different variations of Korean Fried Chicken. The fusion aspect of this stall made it really accessible and really tasty.

I had the Kang Jung, small pieces of chicken thigh cooked perfectly with really tasty, reallly unique sweet and spicy sauce. If Sunday Bird is any indication, chet Hong’s other stall, Sunday BBQ, that is yet to open, will also deliver. 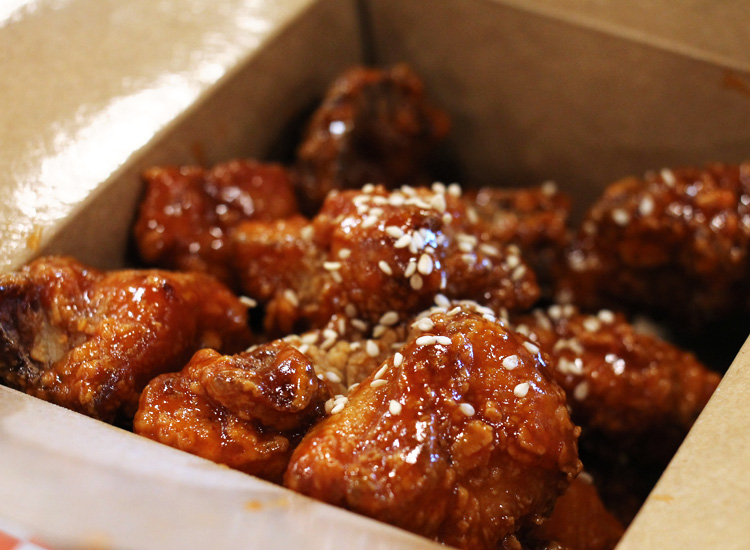 Next up was the Seafood Pancake at So Gong Tung Tofu and BBQ. This dish was certainly what it sounds like, which isn’t a bad thing. The Pancake was filled with scallions and various seafood, like shrimp, mussels, and fish. 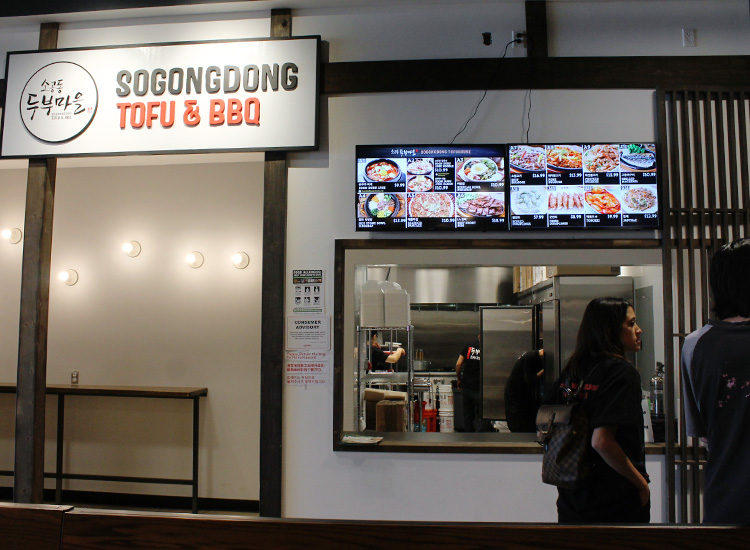 Served with a  side of soy sauce and red pepper cucumber, this was a really authentic dish, and pairs really well if you want to have an all-around experience and pick up different dishes from different stalls. 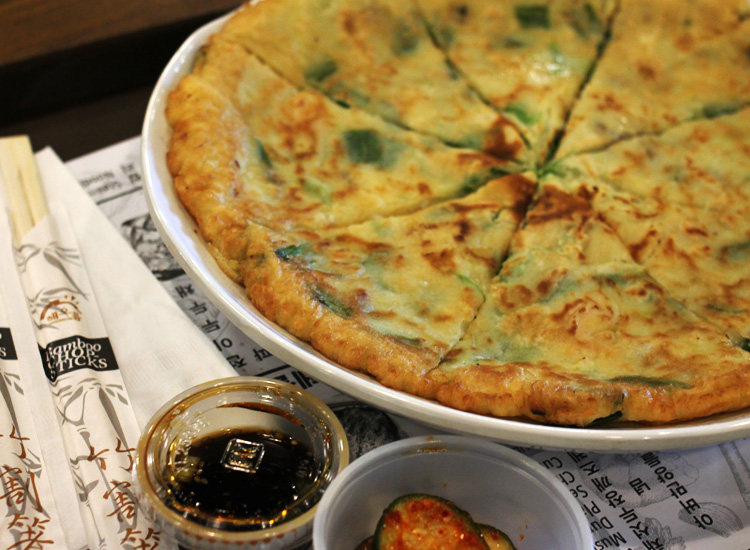 I couldn’t leave H-Mart’s market eatery without trying some sushi. I decided to check out Momo Sushi, a stall that offered a really nice variety of sushi, sashimi, and bento boxes.
With rolls ranging from traditional salmon and tuna rolls to specialty rolls like the “Heart Attack” that included deep friend jalapeños, I landed on the Austin roll, which was a really solid fusion specialty roll: shrimp tempura, crab stick, and cream cheese rounded out a very accessible but very tasty roll. 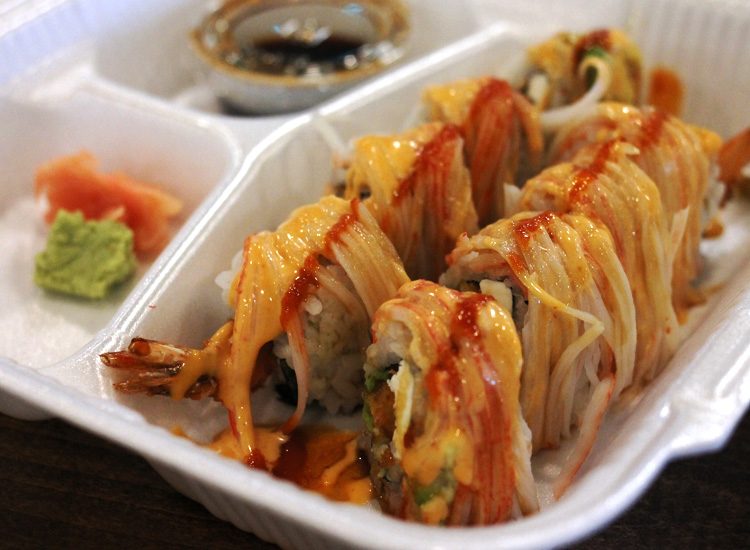 Mix, the Korean style street food stall, had many menu items that hit several of my Asian cuisine pleasure points upon inspection. I was able to sample the spicy pork and spicy chicken over rice, which both had a nice flavor and nice kick. 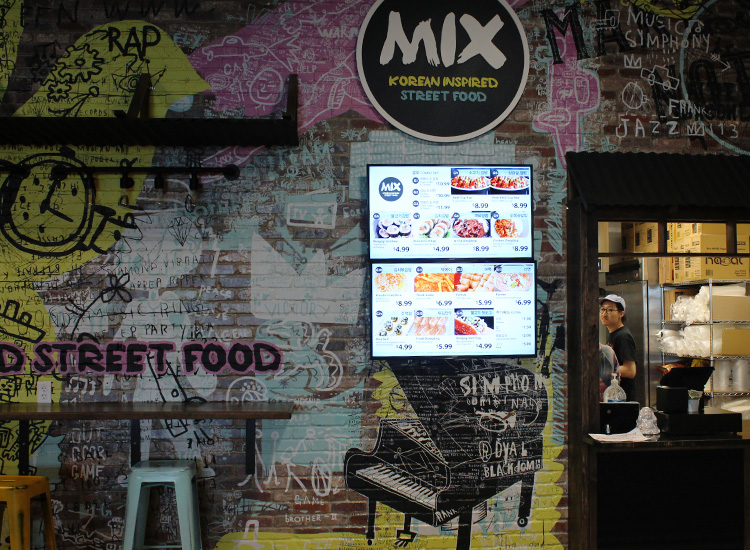 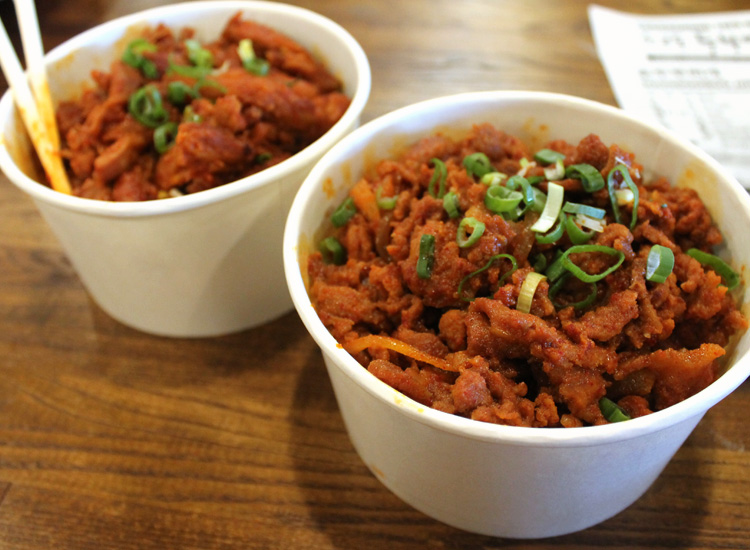 Spicy Chicken and Spicy Pork over Rice-Photo by Phat Foodies

These dishes were also quite authentic, I didn’t catch many dashes of fusion which was quite welcome as I feel that Austin doesn’t have a ton of Korean street food. I also tried the rice balls with kimchi, which were an even more authentic creation. 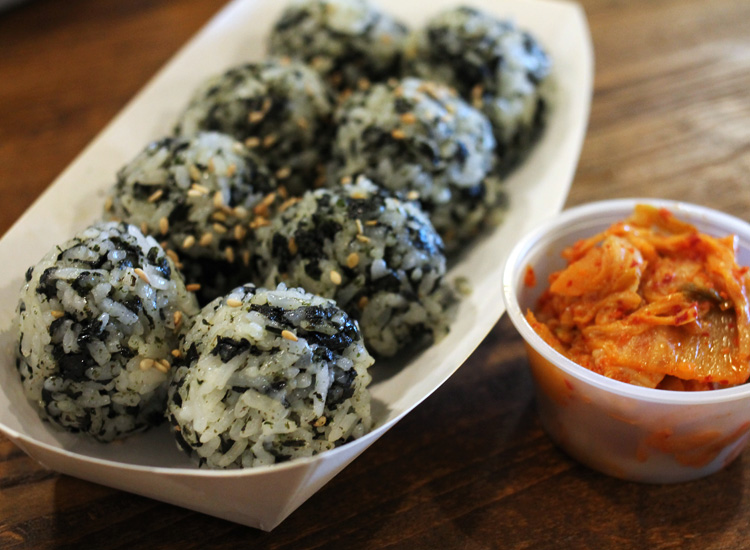 Rounding out the savory dishes, I tried a hambak steak at Katsu, a stall offering various styles of hambak, or ham steaks, as well as fusion-style asian wraps. For those with questions, a ham, or hambak steak is a ground beef patty served with various accompanying sauces, cheeses, and in some cases, other meats. 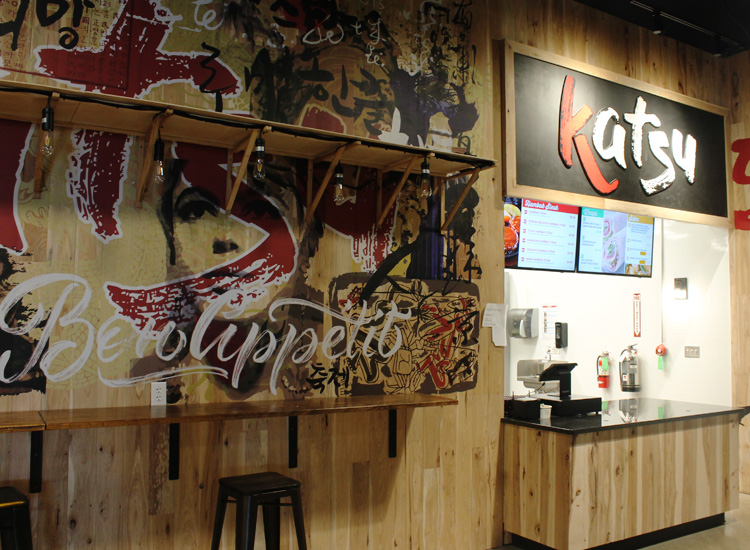 I tried the Korean Bulgogi Hambak steak, topped with onions and cheese, served with two potato balls, which were topped with a spicy white sauce, and Korean slaw. This reminded me of ham steaks that I used to love when I was younger, a very good fusion dish that speaks to a wide audience of food lovers. 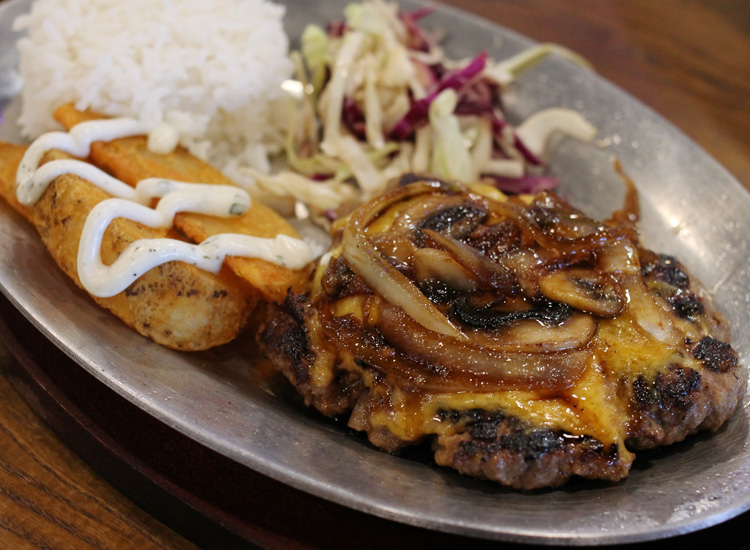 After sampling a what’s what of the savory stalls, a visit to the market eatery wouldn’t be complete without getting some snow ice at Snow Mo, the stall with shaved ice, boba tea, and snow ice, which I’ve only had once before. Snow ice is essentially shaved ice made with real milk. Add some sweet and condensed milk on the top and you have the base of a really delicious and interesting treat. 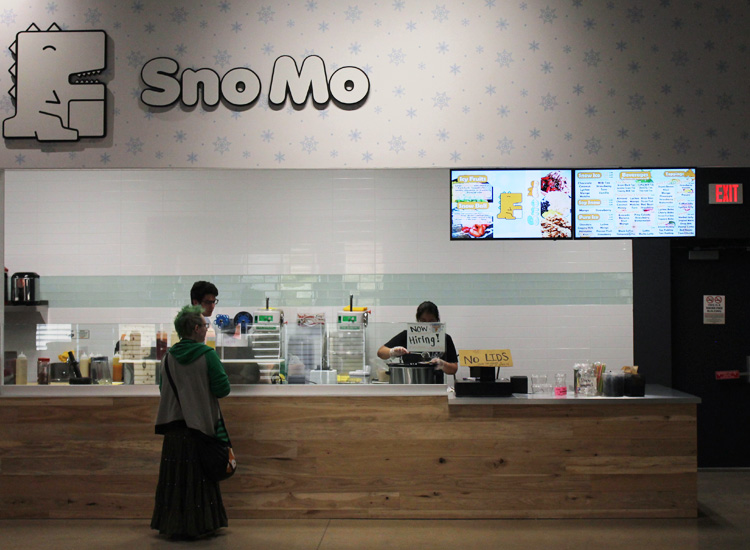 I got the mango flavor with pineapple and banana, I recommend getting at least one fruit topping as it makes this treat even more dynamic. There are also several other options for toppings, such as Butterfinger bits, chocolate chips, lychee, or tapioca pearls. 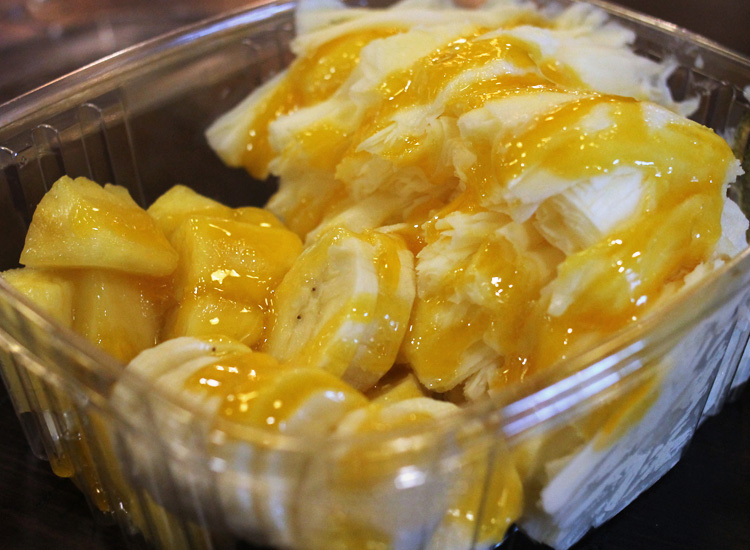 Mango Snow Ice with Pineapple and Banana-Photo by Phat Foodies 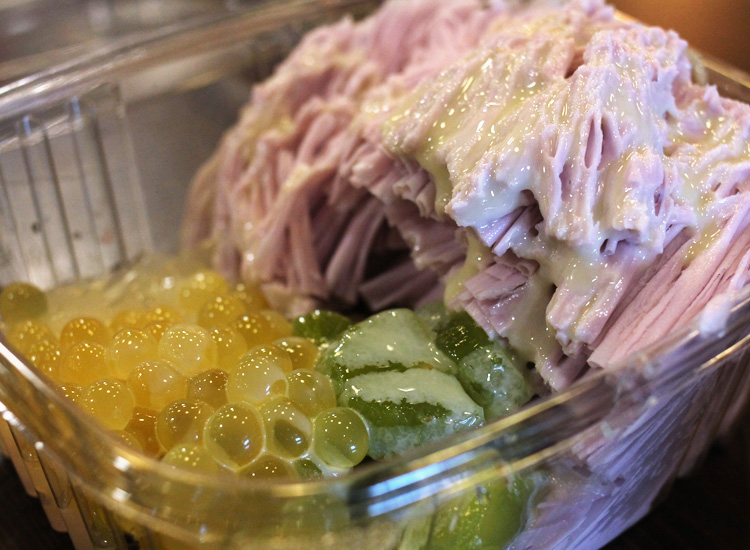 Taro Snow Ice with Kiwi and Pearls-Photo by Phat Foodies

There’s not much else I can say about H-Mart’s market eatery that I haven’t already said, it’s a very immersive cultural food experience that you almost have to see to believe. Get to H-Mart ASAP, because I’m sure you’ll love it! 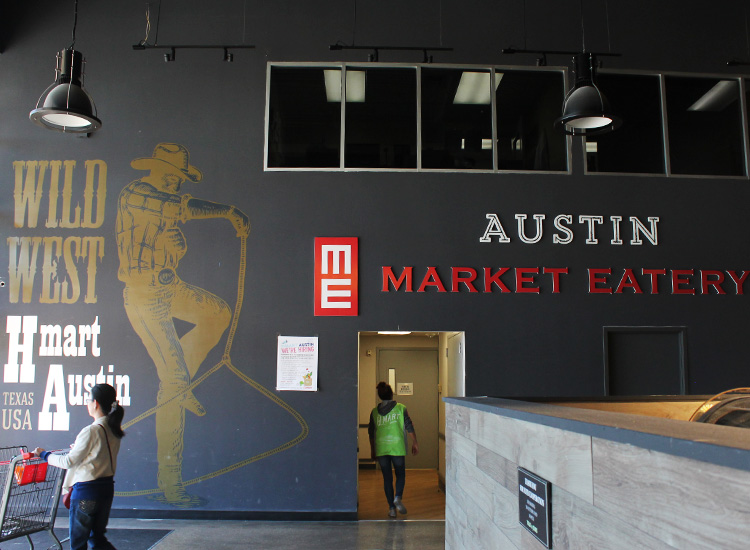