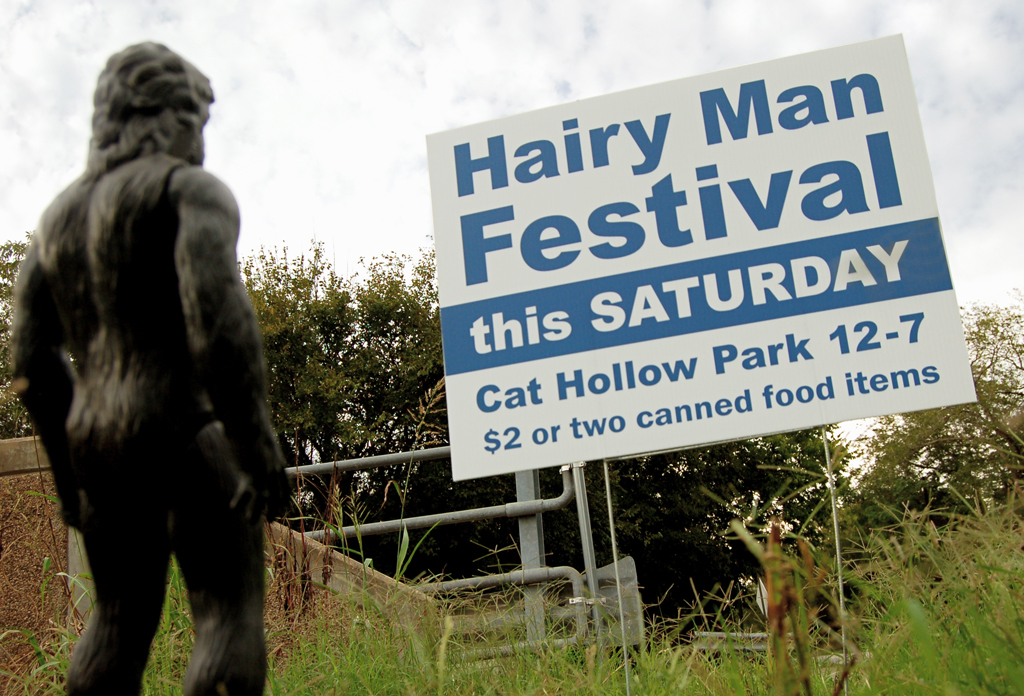 This man won the Hairiest Man Contest in 2011. Photo: Courtesy of BWCA.

But how did all of this begin?

“The Hairy Man is a legend that goes way back before Round Rock was actually Round Rock,” Sandy Spahrmann, VP member of BCWA and one of the festival’s coordinators, told Austin.com. “The original women that started the Brushy Creek Woman’s Association were trying to connect the city and neighborhoods by providing Festivals, meetings, and groups to bring the community together and this festival was just one of those they chose to help our community.  It appealed to them because many of them grew up hearing the story.”

The legend of the hairy man dates all the way back to the 1800’s, when Hairy Man Road in Round Rock was just a simple dirt path that cut through a dense wooded area parallel to Brushy Creek. Travelers who navigated the route gained convenient passage in and out of Austin, but at a price: They risked angering a territorial hermit who did not take kindly to trespassers.

the Hairy Man, who haunts the winding road along Brushy Creek.

This wild man was covered allegedly from head to toe in hair and would jump out of trees, hang from leafy canopies, shout, moan, and attack wagons to frighten intruders away. Over the years, many likely scenarios have been dreamed up by local historians to explain this strange fellow’s behavior, but nobody can be sure if the wild stories told about how this Texas-style Bigfoot came to be are anywhere close to the truth.

Thus, the legend of the Hairy Man was born.

In past years, Hairy Man festival coordinators have counted more than 5,300 attendees at any one time during the event, making the Hairy Man Festival a real force to raise funds—often $30,000 per year—for local charities such as the Round Rock Serving Center, an organization that bands local churches together to fuel a community food pantry and clothes closet, among other wellness programs. Admission to the festival is $2 or two nonperishable food items for this very reason!

Besides its charitable focus, the Hairy Man Festival endeavors to have a steady stream of live music playing throughout the event. Among the musicians in the lineup are Aubrey Crow (11 – 11:30 a.m. after the opening ceremony), Wicked Kitty (1 to 2 p.m.), and Blue Mandala (3 to 4 p.m.).

As an ode to the festival’s namesake, local historian Gwen King will perform the reading of the Hairy Man legend at 4 p.m., right before the much-anticipated “Hairiest Man Contest,” which rewards the furriest contestant with a pretty $500 cash prize.

The festival also features Brushy Creek MUD‘s Hairy Man 5K run, which follows Hairy Man Road itself. However, with all the rapid urbanization and residential growth going on in central Texas right now, there’s not much left of the the wilderness that the old, hairy hermit allegedly called home.

For more information about the Hairy Man Festival, visit the event’s official website or Facebook page. To learn more about the Hairy Man, read this informative article on what life was like in the 1800’s when the myth first began circulating. Featured photo: Flickr user JD Hancock, creative commons licensed.