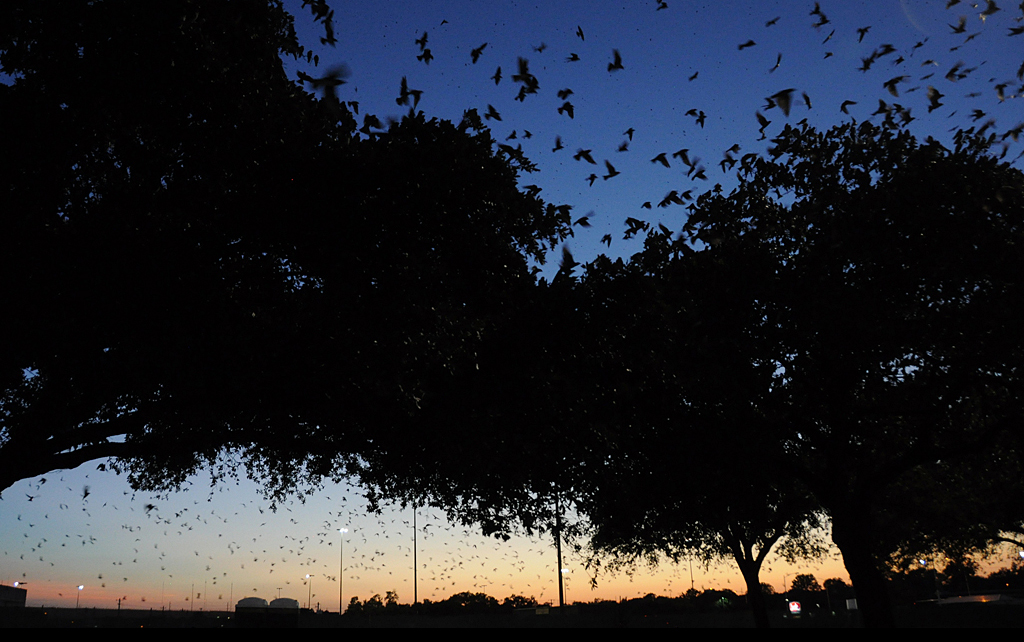 Highland Mall might be out of commission, but that doesn’t mean it’s been abandoned. Since the 1980’s, the old shopping structure has played host to a thriving colony of hundreds of thousands of purple martins, North America’s largest swallows, during their annual migration south.

Purple martins — who get their name from their feathers’ distinctive purplish tint — are agile and aerodynamic, capable of attaining flight speeds of up to 41 mph. Like Austin’s bats and their barn and cliff swallow cousins, purple martins keep Austin’s insect population way down. Each bird can eat its weight in flying bugs like mosquitoes and dragonflies per day!

Though not as popular or publicized a tourist attraction as our beloved Congress Bridge Bats, Austin’s purple martins have been steadily attracting attention and winning local admirers over the past few years. Every evening throughout July and August, bird-loving Austinites gather to watch the martins’ nightly “swarms” as they swoop in to roost for the night in the mall’s surrounding live oak trees. “This is an amazing spectacle of nature happening in North Austin,” Travis Audubon volunteer Shelia Hargis told Austin.com. “The aerial show is amazing, and you don’t have to travel very far to see it… At the roost, I’ve heard from people who have no connection to birds say, ‘Oh my god. This is spectacular!’ and ‘This is better than the bats!’ and then come back the next night with their family and friends.”

The martins first showed up in notable numbers in 2000. At that point, the Austin birding community, spearheaded by the Travis Audubon, began keeping tabs and raising awareness about them. To that end, TA hosts multiple free “Purple Martin Parties” each season, inviting locals to gather to learn about the birds from birding experts and watch the nightly swarms.

“Travis Audubon is always looking for ways to connect people to nature,” TA Executive Director Joan Marshall told Austin.com. “What’s exciting about the Purple Martin Parties is that most of the spectators are new to birding.  It’s a great educational opportunity — you can’t protect and care for the environment if you don’t appreciate it!”

Last year marked the martins’ largest gathering in Austin yet — roughly 600,000 birds — and Hargis expects that we will see similar (if not increased) numbers this season… but not at Highland Mall. According to early viewers, the swallows appear to have selected a different roost site for 2015: the live oaks near Shepler’s Western Wear at Capital Plaza Shopping Center.

“This new roost already has more than 100,000 birds,” Hargis said. “That’s lots more than we normally see at this time of year, so this year’s show could be even more spectacular than normal… if that’s possible!”

Purple martin viewing is best in July and fizzles out quickly after that as more and more birds migrate south, so be sure to catch the display before August rolls in, either by going it alone or with friends, or by attending one of TA’s Purple Martin affairs. To find the roost, turn into the Plaza through the main entrance, which is just before Target, and find a parking spot between the stop sign and the end of the road, keeping an eye out for pedestrians. Swarm time varies but usually begins near sunset, so make sure you’re camped out in your lawn chair with umbrellas up and/or hats on by 7:45 p.m. And for goodness’ sake, after our crazy spring deluge, do not forget to slather on the bug spray.

Here is footage from Texas Parks & Wildlife of the 2014 roost (watch in HD):