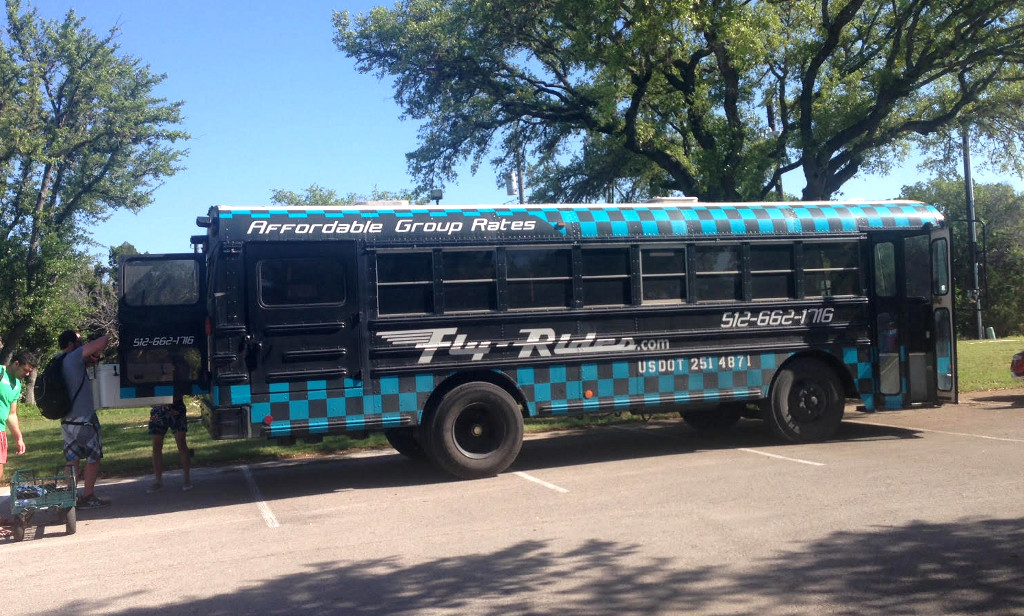 Have you ever been at a party that suddenly wants to migrate to another location, only it requires people to drive their cars? It’s a recipe for disaster. Some people leave, some people get lost, and worse yet, some people just drive drunk — and we know what that leads to. It would be nice to have a bus that just shows up to ferry everyone around, right? Yeah, it would be — only all the party buses in town are really freaking expensive. Sure, they’re gorgeous, tricked-out rides with massive bass boosters, stripper poles, black lights and all, but who wants to front usually over $1,000 for a ride?

That’s what got Austin entrepreneur Scott Good thinking, maybe there’s an opening in the local party bus market. Even though he originally studied to go into real estate, the idea for a cheap party bus captured him. So, he bought a bus on the cheap and fixed it up, then wrapped it with graphics and retrofitted it with neon lights.

Today, Good is the owner of Fly-Rides, a unique party bus startup in Austin that offers flexible, low rates for rides scheduled in advance. It’s not a last-minute, 30-person Uber, nor is it stacked to the gills with expensive toys and gimmicks. It’s a bus and a driver, and they’re willing to work with you to transport your next party.

“I basically took the Ikea/Costco model — no frills, high volume — and ran with it,” Good told Austin.com in a recent interview. “We cater to a market here in Austin that was totally under served, groups of 20-40 people who just want a safe ride home and don’t want to break the bank doing that.”

It usually works out that instead of a single person fronting a large sum, everyone riding the bus pays $20-30 for party transportation. Good’s website boasts that his model produces a savings of 50-70 percent off other party bus rentals in town — and that’s about right.

“I saw a lot of people here in Austin driving drunk, which is mainly why I wanted to do this,” Good said. “I love services like Uber and Lyft, but you can’t Uber or Lyft 30 people from downtown Austin to the lake. We’re out there catering to those groups. People who all want to go floating together in San Marcos, bachelor parties. Things like that.”

As you can imagine, this business model has led to some fun-looking results… “It’s a lot of fun for everyone,” Good said. “Besides, Austin is a party city! Every weekend there’s a barge, a float, a festival, a bachelor party. You get a ride from me, you’re going to be comfortable and you’re not going to leave with a sour taste in your mouth because you personally ended up paying more than $50 per person.”

Bus and party photos via Fly-Rides.com.