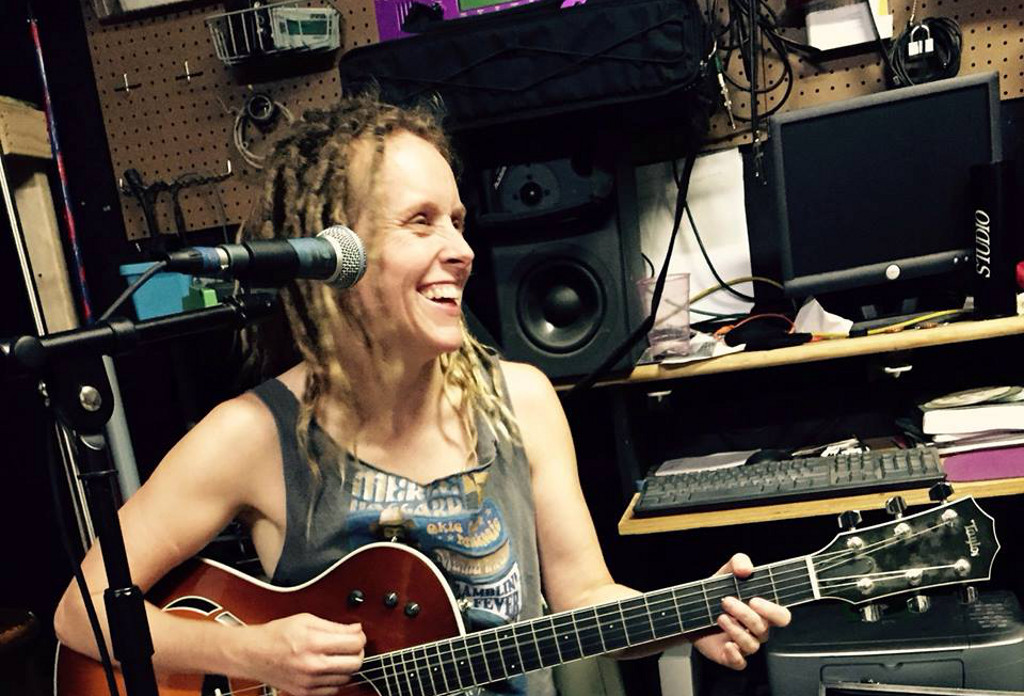 You can’t throw a rock in Austin without hitting a musician. Even though the rent is outrageous and the city is rapidly changing, musicians still flock to the “Live Music Capital of the World” to live their dreams. And while the music business is as tough as ever, some folks manage to make a living and hold on to their passion for beautiful noise. One of those lucky few is Adrian Conner.

Conner is the lead guitarist of the popular, all-female AC/DC tribute band Hell’s Belles. Not only is she a shredder par excellence, Conner is also wildly entertaining on stage. If you see her perform, don’t be surprised if she jumps off to play her blistering guitar on top of the bar — or right in your face. It’s a thrilling spectacle, and the crowds eat it up.

Check out a Hell’s Belles show below:

Conner is also a singer and songwriter for her own band, in addition to being a guitar goddess known for shredding AC/DC riffs. She fronts a tight, 3- piece band under her own name, and her next album is going all acoustic, full of re-imagined original songs and covers, plus a few surprises. The appropriately named album Hush! is currently available for preorder. Conner plans to throw a CD release party at The Continental Club on September 22. After that, she’ll be quite busy touring in support of Hush! Although she’s a seasoned electric veteran, Conner told Austin.com that she’s looking forward to the challenge of playing acoustic shows. “There are no effects on an acoustic guitar,” she said. “I’m totally naked and have to be more technically proficient. But on the flip side, I can hear my voice more than ever.”

Conner didn’t start out knowing much about rock n roll, even though her music teacher exposed her to Stevie Ray Vaughn and Janis Joplin as a teen. Back then, she was more interested in pop music… Until she discovered classic rock for herself. But, what was the thing that pushed her over the edge and into a career in music? She credits an acid trip at the age of 19, which gave her enough confidence in her talent that she decided to go all in.

It’s no secret that women can have a tough time being taken seriously as rock musicians, but Conner remains determined. Through the years, she has gained numerous insights about the realities of being a female in such a male-dominated genre. Even so: “I’m still here,” she said. “Hard work overcomes misogyny.”

Though she tours extensively with Hell’s Belles and could live pretty much anywhere in the country, this Seattle-area native chose to put down roots in Austin, which she called “the DIY center of the world, music-wise.”

“People go out here!” she exclaimed. “It’s not like other places I’ve visited in the USA. World class musicians playing in tiny clubs for $10-$20 cover? This place is a music fan’s dream!”

Conner has seen a lot of change in the Austin music scene during her 13 years living in Austin. She welcomes growth in different genres, but laments that the city’s population explosion hasn’t led to more music fans. “It’s disappointing to see fewer people in the clubs now than in ‘02, when I moved here,” she said. “The buildings get taller and the nightly live music crowds get smaller.”

In spite of the growing pains, Conner still loves Austin and the community she’s found. When she’s not playing music, she’s seeing it live. Her tastes run the gamut, and she’s particularly fond of local acts.

Her advice to aspiring musicians is simple. “Listen to music,” she said. “Always listen.” Conner also warned against competitiveness. “Music is the opposite of competition,” she said. “It’s about touching each other. I love being touched.”