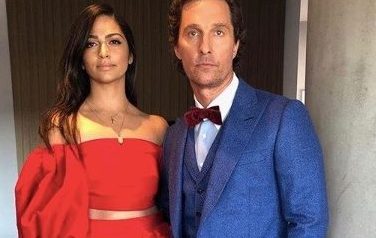 Want to know about this week’s hottest headlines in Austin entertainment? You’ve come to the right place. These are the top six pop culture related stories with ties to the ATX.

All the pretty people were at the Mack Jack & McConaughey fundraiser on Thursday night, including Matthew and Camila, of course. Molly Sims and Tamera Mowry were there too while Chris Stapleton performed.

Mack Brown, Jack Ingram, and Matthew McConaughey formed MJ&M in 2013 and since then they have raised more than $10 million for Austin organizations that support children like the Rise sSchool of Austin, Dell Children’s Hospital, and Matthew’s own Just Keep Livin Foundation.

All the pretty people were at the Mack Jack McConaughey fundraiser tonight, including Matthew and Camila, of course. Molly Sims and Tamera Mowry were there too while Chris Stapleton performed. Here are a few pics I found online that made me only a little bit jealous. The owner of each photo is tagged. • • • #mjm #mjm2019 #mackjackmcconaughey #matthewmcconaughey #camilaalves #mollysims #tameramowry #chrisstapleton #austintexas #atx #austintexasthings #atxevents #austinevents #empowerkids #jklivinfoundation #jklivin #alrightalrightalright

Moontower Comedy Festival kicked off its four day event on Wednesday with headliner Nick Offerman. Thursday night headliners were David Spade and Nate Bargatze. Still to come: Sal Vulcano, Jenny Slate, and the cast of “Schitt’s Creek,” among many others.

The Endgame is Here

The most talked about entertainment event this week is most definitely Avengers: Endgame. ATXgossip posted a spoiler free review you can check out here. While reviewing the pictures of the premiere, we spotted Austin native Gabriel Luna in attendance. Luna starred as Ghost Rider in the TV series “Agents of S.H.I.E.L.D.” Not long after the premiere Luna jumped on a plane and headed to the ATX where he posted a picture to IG featuring his former high school coach at Crockett High. He also made a scholarship presentation at Round Rock High School, in honor of his cousin who lost his battle to cancer this past October.

Had the chance to go see my high school coach John Waugh and speak to the freshman football team at Crockett High School. Great to see you coach! Thank you for all you taught me. Go Coogs! #alwaysvictorious

DJ Mel Brings the Beats to the NFL Draft

Austin’s very own DJ Mel was the official DJ at the 2019 NFL draft in Nashville. He previously served as president Obama’s “go to DJ,” spinning at the 57th presidential inauguration, Obama’s farewell address, and the White House Easter egg roll from 2013 through 2016, among many other official events. He is also the official DJ for the University of Texas football and men’s basketball teams and he was inducted in the Austin Music Hall of Fame in 2014.

The premiere of our official video for Mr. Lonely is out tomorrow at 1:00p CT on our Midland Youtube channel. Tune in early to talk with us before it starts. Click the link in our bio to set an auto reminder, you don’t want to miss this. Sorry for this nerdy message but our managers said this stuff is important. #mrlonely #nerdstuff #DennisQuaid #DennisQuaidAintNoNerd

Happy birthday to Austin natives Austin Nichols and Amber Heard. Nichols turns 29 while Heard is now 33. Here are each of their prospective IG posts marking the occasion.

I only bathe once a year. On my birthday. So I always dress up for this special occasion.

72 hours with your best friends is all it takes to rewire the brain for joy. #bestbirthday

Celtic Woman is happening at Frank Erwin Center on Saturday. The group continues the centuries-old Irish tradition of telling stories through songs that bring a piece of Ireland to audiences everywhere.

The Red Poppy Capital of Texas, a.k.a. Georgetown, will celebrate its 20th Red Poppy Festival this weekend, kicking off tonight with Lonestar favorite Pat Green. The event is absolutely free. You can get more info here.

Our favorite event honoring Austin‘s weirdness is also going down this weekend. Eeyore’s Birthday Party happens on Saturday in Pease District Park from 11 a.m. to dusk.

And of course the biggest news of the weekend, along with Avengers: Endgame, involves another Stark. An epic battle is going down at Winterfell on “Game of Thrones” on Sunday. There’s no tie-in to Austin here, it just seems to be what everyone is talking about and we don’t like to be left out. Catch screenings at North Door, Native Hostel, and Nickel City.