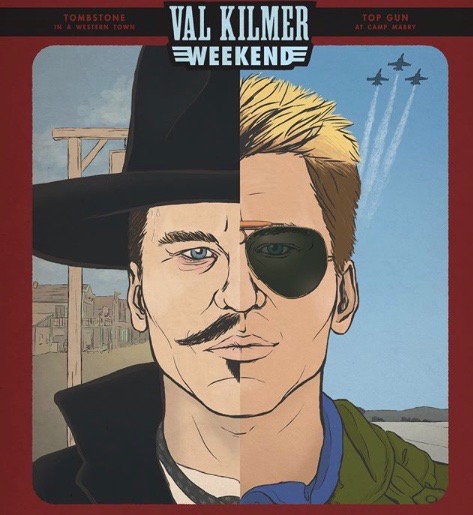 Comic Con is under way out in San Diego and there are plenty of ATX-cellent things we’re keeping an eye on. The “Supernatural” panel isn’t happening until Sunday, though we already caught a glimpse of Jared Padalecki enjoying the “Stranger Things” party with fans on Thursday night. Meanwhile, Jenna Elfman has posted a handful of pics of the “Fear the Walking Dead” gang and Austin native Gabriel Luna shared this joyful picture of himself and Arnold Schwarzenegger promoting Terminator: Dark Fate.

And while we’re on the subject of Comic Con and birthdays, temporary Austinite Alycia Debnam-Carey, who stars on “Fear the Walking Dead,” turns 26 this weekend. HBD to her as well!

The Iceman cometh. Austin Food & Wine Alliance and the Rolling Roadshow are bringing legendary actor Val Kilmer to Austin for two movie events. On Saturday, August 31, Kilmer will be live and in person at J. Lorraine Ghost Town for a very special screening of Tombstone. Then on Sunday, September 1, he’ll be at Camp Mabry for a screening of Top Gun! Tickets are on sale now.

Midland lead singer Mark Wystrach and Outdoor Voices CEO Ty Haney are expecting a baby! The couple both made announcements on their instagram accounts which is also how they announced their engagement earlier this year. Their little girl is due in November.

Napoleon Dynamite at the Paramount Austin

In case you missed it, we posted an epic picture of a family at the Napoleon Dynamite screening and Q&A at the Paramount last weekend. Jon Heder (Napoleon), Efren Ramirez (Pedro), and Jon Gries (Uncle Rico) were all in attendance to discuss the classic film. You can read all about it and see more pictures here.