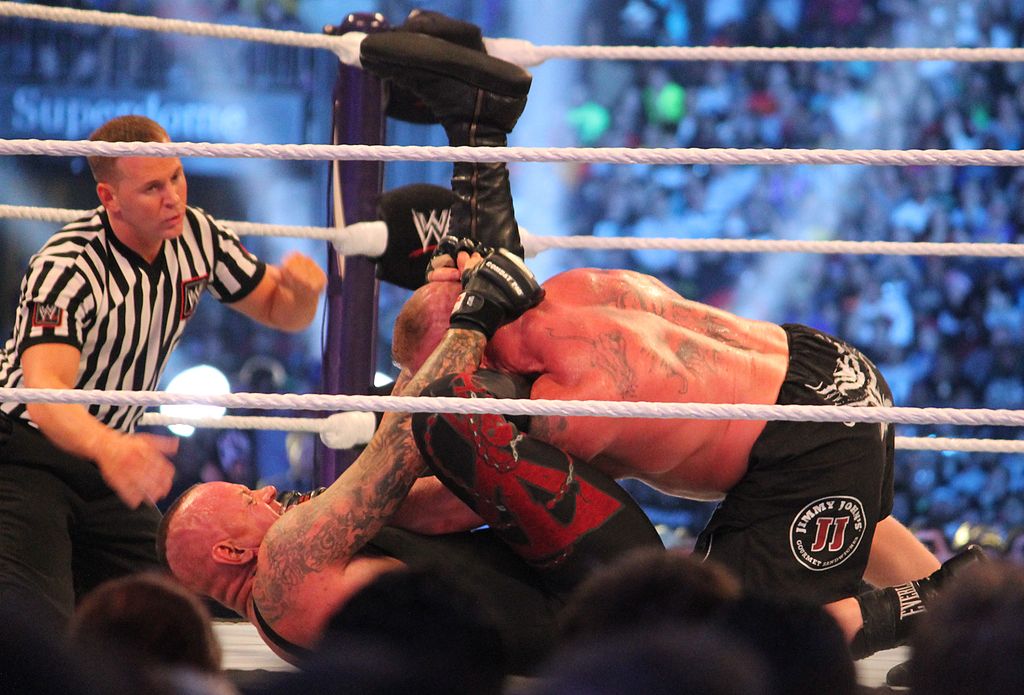 You’ll Flip When You Find Out Which WWE Wrestlers Are Your Neighbors!

Texas as a state, in general, has always been a hotbed for that most American of forms of entertainment — professional wrestling (aka “sports entertainment”). Weekly shows of World Class Championship Wrestling, held in Dallas at The Sportatorium, were so popular that they led to a regular weekly series on ESPN in the 1980s. Ask anyone who grew up in the Dallas/ Ft. Worth area during those years about “the Von Erichs and the Freebirds” and, wrestling fans or not, they’ll more than likely be able to remember a thing or two.

While the wrestling scene here in Austin might not see that level of fandom (although groups like Anarchy Championship Wrestling and Inspire Pro Wrestling are looking to change that), it is home to a number of wrestlers who stepped up and succeeded to one degree or another, on the world stage. Apparently, Stone Cold Steve Austin could be the subject of an upcoming The Last Dance style documentary, according to this report. And, of course, there’s the farewell for The Undertaker happening at the Survivor Series.

Here are the best known wrestlers that hail from the ATX:

Mark Calaway, aka The Undertaker

One of the most popular and enduring figures in pro wrestling, The Undertaker (aka Mark Calaway) may have been born in Houston, but he has called Austin his home for decades.

Calaway began his career as The Undertaker in WWE in 1990 (he had been working in other promotions for a number of years beforehand), dressed as an old-time wild west mortician with a 7′ frame and seemingly supernatural powers. Since then his character has evolved (including a three year stint as the motorcycle riding, biker with a bad attitude “American Badass,” which allowed Calaway to bring more of his own personality into the character). Because of his physical conditioning and intelligence (which prevented him from making stupid mistakes in the ring and therefore avoiding injuries), Calaway has consistently put on incredible matches — including two matches with Shawn Michaels at Wrestlemania that some consider the two best matches ever. It’s also worth nothing that Undertaker made his Wrestlemania debut at Wrestlemania VII and for 21 years – up until Wrestlemania XXX – he had never lost a match at the event.

While Calaway’s performing career is all but officially over, he still manages to use his notoriety for good, including this raffle in which he donated one of his custom made bikes to raise money to help veterans returning home from service.

An 18-year veteran of WWE and long time Austin resident, Mark Henry is commonly referred to as “The World’s Strongest Man.” This is not a nickname bestowed upon him by some PR flunky at WWE headquarters. This is a title that this Olympic powerlifter genuinely earned.

A legend in the world of competitive weightlifting, Henry holds three U.S. National Weightlifting Championships, an NACAC Championship, a USA Weightlifting American Open championship, WDFPF World Powerlifting champion and the winner of the first Arnold (Schwarzenegger) Strongman Classic in 2002. He was the largest athlete to ever compete in an Olympic games in 1996; however, a back injury prevented him from performing at his best and failed to medal. During his weightlifting career, he has constantly been tested for steroids, each time always passing, and considers the fact that he set all his records and won all his championships without any anabolic steroids or any other PED his proudest achievement in weightlifting.

In 1996, based on his accomplishments in the powerlifting world and the notoriety it garnered him, WWE signed Henry to a 10-year contract to work for them as a wrestler. Provisions in his contract allowed him to take time off to train for weightlifting competitions. Brought in under a great deal of hype, Henry’s work didn’t exactly live up to the expectations set for him. He was eventually paired up with the Nation of Domination, a wrestling faction loosely based on the Nation of Islam and Black Panthers, before giving him a number of what some would consider embarrassing storylines – including one where he impregnated an elderly woman and another where he worked to overcome sex addiction.

To Henry’s credit, he worked hard to make these stories entertaining and was willing to be be sent down to WWE’s developmental territories (think of it as a farm system in baseball, but for wrestling) to work on his skills and conditioning. As Henry got older, his performances simply improved and his character went from a silly, clownish Lothario called “Sexual Chocolate” to an unstoppable monster that put other wrestlers on the shelf with injuries (he called it his “Hall of Pain”) and that everyone was afraid of. In 2011, Henry was awarded the World Heavyweight Championship.

Henry still makes his residence in Austin years after first settling here to attend the University of Texas and, as his career winds down, spends more and more time here with his family.

No worries at least you know you’re somebody when random pictures surface.

While the Von Erichs sentimentally hold the title of “First Family of Texas Wrestling,” the Rhodes family could just as easily take that title. For starters, the patriarch, “The American Dream” Dusty Rhodes was not only a multi-time NWA World Champion (back when that championship was the most highly sought after prize in the business), but was also the head creative director of some of the most famous (and infamous) storylines of the 1980s and 90s. Austin born and raised, this WWE Hall of Famer was a true wrestling icon.

His son began his career in earnest in WCW, working with his dad as “The Natural” Dustin Rhodes. Tough, talented, and driven, he still seemed like he was treading water and always going to be thought of as “Dusty’s kid.” That all changed in 1995.

While Dustin technically began his career as “The Natural” in WWE in 1990 (helping his dad in his feud with “The Million Dollar Man” Ted DiBiase), when he returned to the company five years later, he was almost unrecognizable. Wearing wigs and makeup and painted head to toe in gold underneath clothes of the same color, he debuted as Goldust, a movie obsessed lunatic (he was supposed to look like an Oscar statue come to life), he preyed upon the innate homophobia of his opponents to gain a psychological advantage (it’s important to point out that, while doing this, he was the bad guy). His character has changed over the years – going from a more comedic personality to a mixture of the original Goldust character and Dustin’s own personality – but he’s still entertaining people on TV. This time around, he’s working a program with younger brother, Cody (who would have also been included if it wasn’t for the fact that he calls Georgia home).

Dusty, in the meantime, is enjoying the retired life at his home in Austin, still making the occasional event and TV appearance when he’s needed.

Back when I was a G! #Gmoney #Goldust

If you look at ticket sales, merchandise sales, mainstream media exposure and general public perception, Stone Cold Steve Austin (born Steve Anderson and renamed Steve Williams after his stepfather following his mother’s remarriage to Ken Williams – a man, to this day, Austin calls his “real” father) is the most popular professional wrestler of all time. Bigger than John Cena, bigger than The Rock, and even bigger than Hulk Hogan. His redneck anti-hero persona, as well as his weekly storyline in which he fought with and beat up his overbearing boss, thus allowing frustrated working class viewers live vicariously through him, resonated with viewers so much that “WWE Monday Night Raw” was not only the most watched cable TV program at the time but, for a short while, was the most popular TV show overall.

Austin began his career in the home of Texas wrestling – WCCW – before moving on to WCW as “Stunning” Steve Austin. Despite winning a number of titles there, he was never really given the chance to excel and was eventually let go while recuperating from an injury. He would then move on to the then-WWF as “The Ringmaster” before hitting upon his Stone Cold gimmick and international superstardom. These days he spends his time between his home in Austin, his ranch in Tilden, TX and his home in Los Angeles, CA. When not producing his weekly podcast, The Steve Austin Show, he’s starring in whatever movie he damn well pleases, his reality TV competition on CMT, and that’s the bottom line because Stone Cold said so.

Paul London was not only a graduate of Westlake High School, but also founded the school’s first amateur wrestling team — a team he would go on to captain. He began his pro career on the independent circuit while attending college at Southwest Texas State University. In 2002, London made his debut with Ring of Honor and then with Total Nonstop Action (TNA) Wrestling a year later (the third and second largest wrestling companies in the country, respectively). It was during this time that he also worked for a bit in Japan before eventually signing with World Wrestling Entertainment (WWE).

Billed at 5’8″ and 180 lbs., London was one of the smaller performers in a company that, for years, billed performers over 6′ as its top stars. Despite that, due to his talent and athleticism, he found plenty of success within the company. His first televised match with the company, in fact, was a championship match against then-WWE Champion Brock Lesnar. While he never managed to grab that top brass ring, by the time he left WWE in 2008, he was a four-time title holder — holding the tag team titles three times and the Cruiserweight championship once. Since leaving WWE, he has continued to work independent shows in an out of Texas while occasionally making appearances for Ring of Honor.

Want to learn more about celebrities that hail from Austin?
Check out all of these posts!