Whether you’re an Austin native, a resident of 10 years, or a recent transplant from California or the East Coast, it’s safe to assume you’ve tasted a juice from JuiceLand. Doing so is almost a right of passage in this city.

Owner Matt Shook first realized his love of juice in 2001 after enjoying a beverage from Juice Joint on Barton Springs. Since then, he’s dedicated his life to juice, working first at Juice Joint, co-founding Daily Juice next, and finally, founding JuiceLand in 2011.

Recently, JuiceLand opened its 17th store located at 183 & Anderson Mill Road. To celebrate, we compiled a list of 17 facts you might not know about your favorite juice spot in town. 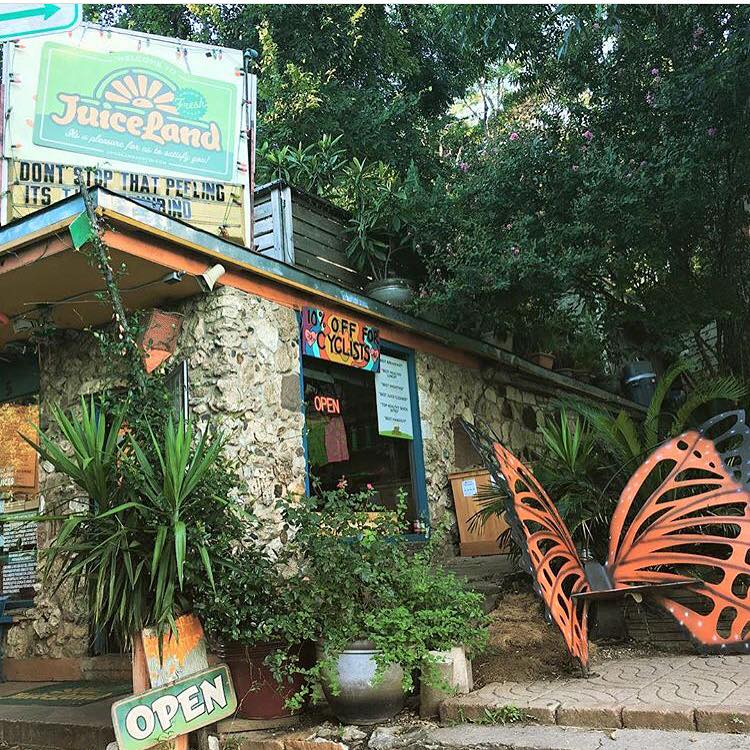 The Barton Springs location is where it all began. Photo via Facebook.

We might be celebrating the grand opening of JuiceLand’s 17th location, but the brand is already working on a few new spots for 2017. JuiceLand is branching out to Georgetown this spring, and will be expanding to San Marcos, Dallas, and Houston later this year.

Alongside fellow Austin restaurant Easy Tiger, JuiceLand is teaming up with 365 by Whole Foods, the Austin-based supermarket chain’s line of affordable stores. The location is slated for Cedar Park and is expected to open later this spring. JuiceLand’s full menu will be offered. 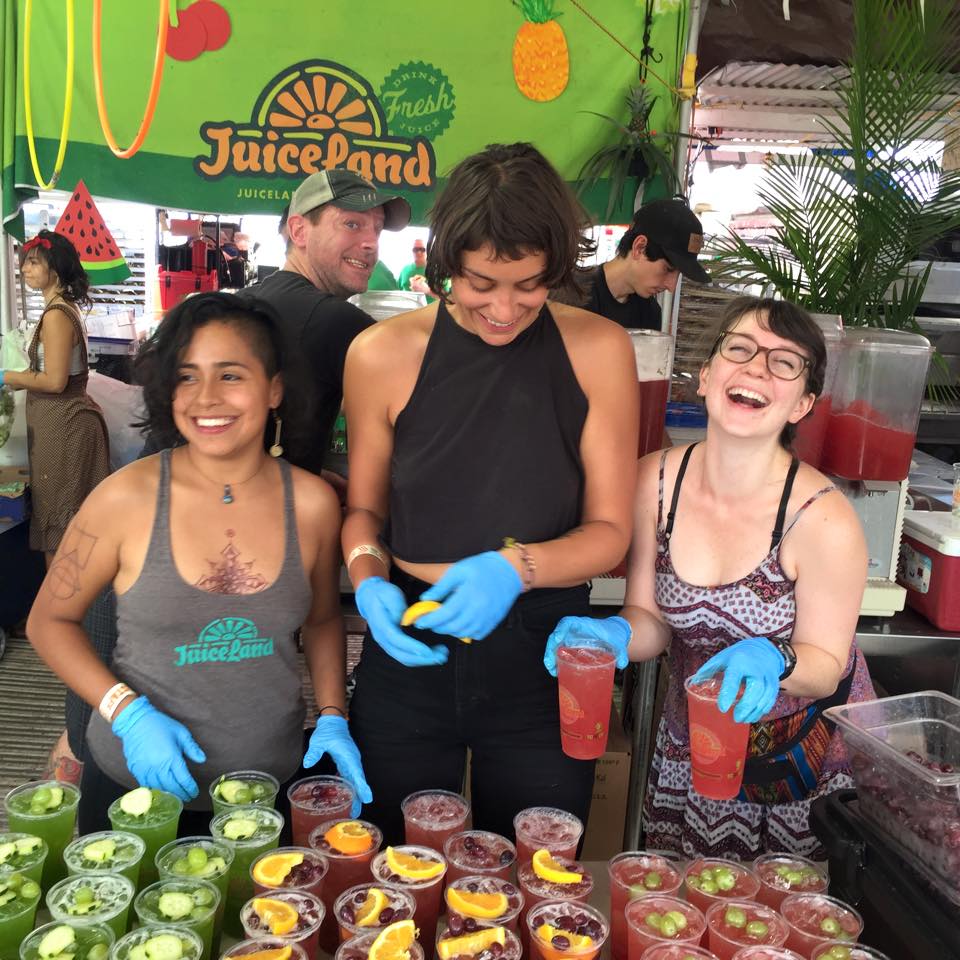 Whether the JuiceLand family is helping at a music festival, organizing a pop-up, or contributing to the extensive menu that features juices, smoothies, hot drinks, shots, and vegan food options, Lexie Shook, JuiceLand’s Marketing Specialist and Juice Fairy, says staff members contribute to every aspect of the brand. They even help with making new recipes and naming each drink or meal once it’s perfected.

And because they’re always sampling and testing new ideas, JuiceLand staff members are always coming up with concoctions of their own. Shook says “they’re known to get creative with add-ins.”

There are a lot of factors that contribute to creating the perfect juice, smoothie, or food recipe. For starters, juices and smoothies are made with 100% fruits, vegetables, nut butters, spices, and add-ins, like flax oil, kelp, or bee pollen; no ice is ever used. While some recipes take months of tweaking and tasting, Shook says others are perfect right from the start. All recipes are taste tested in the office before hitting the stores.

New lil 8oz juice!! This little fella is packed with garlic, carrot, turmeric, orange, lime, cilantro, and jalapeño! It's pretty much the cure for anything that might ail ya.

Garlic fans, take note: JuiceLand just launched a new 8oz juice called the Breath Of Fire. Aimed to help with any health ailment, this new juice is packed with garlic. Ask for this one if you’re feeling under the weather or if (when) your allergies are acting up.

6.) All shops are environmentally conscious

Juices and smoothies are praised for their health benefits, so it’s no surprise this juice chain does its part to better the environment in any way it can. That’s why every store composts. According to Shook, the stores generate roughly three tons of compost a day. To put that into perspective, an average car in the U.S. weighs about two tons.

7.) Bananas are a popular ingredient 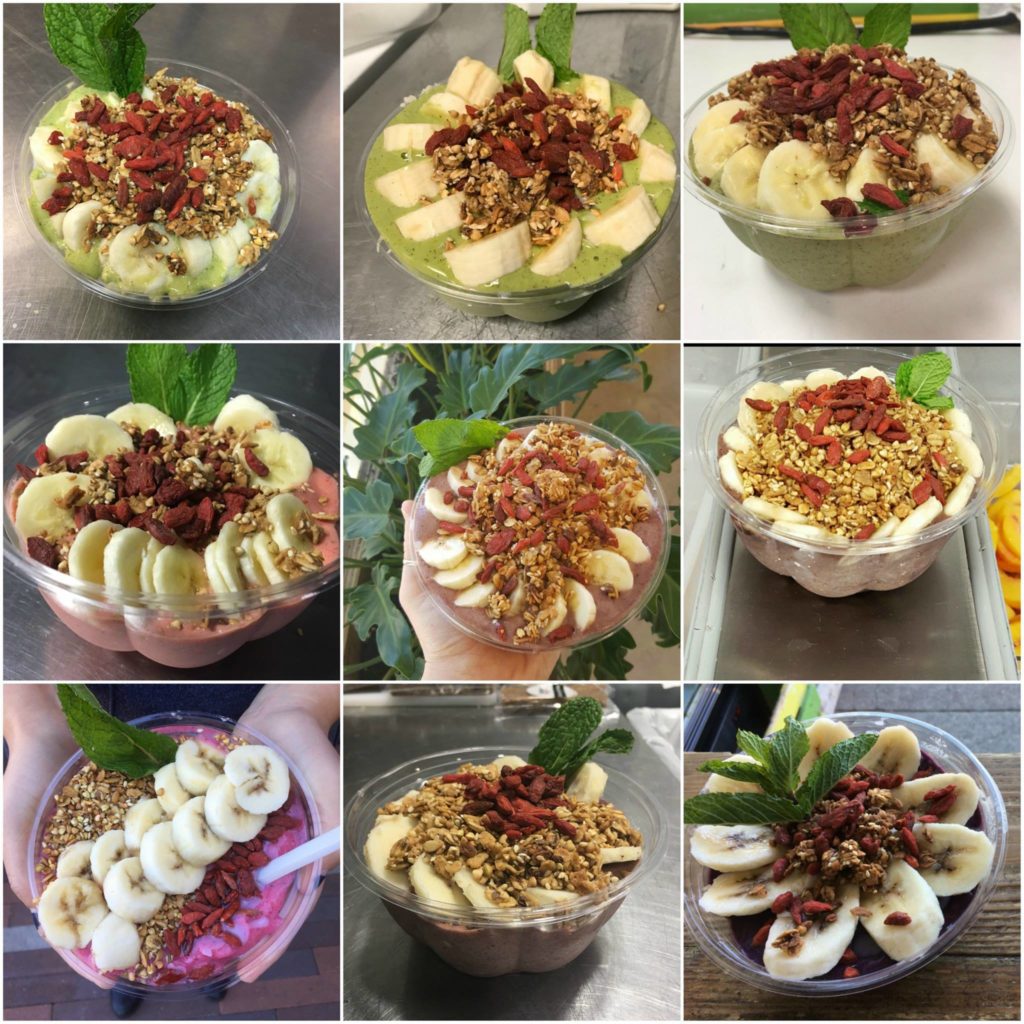 JuiceLand shops peel a lot of bananas. Photo via Facebook.

If you thought three tons of compost was a lot, think again. Combined, the stores peel—by hand—around two tons of bananas per day. That’s a lot of bananas, and that’s a lot of peeling.

The Originator is listed as a “Best Seller” for a reason. The smoothie, a combination of fresh apple juice, banana, blueberry, cherry, peanut butter, brown rice protein, flax oil, and spirulina, has been the number one seller since it arrived on the menu.

9.) All food options are vegan 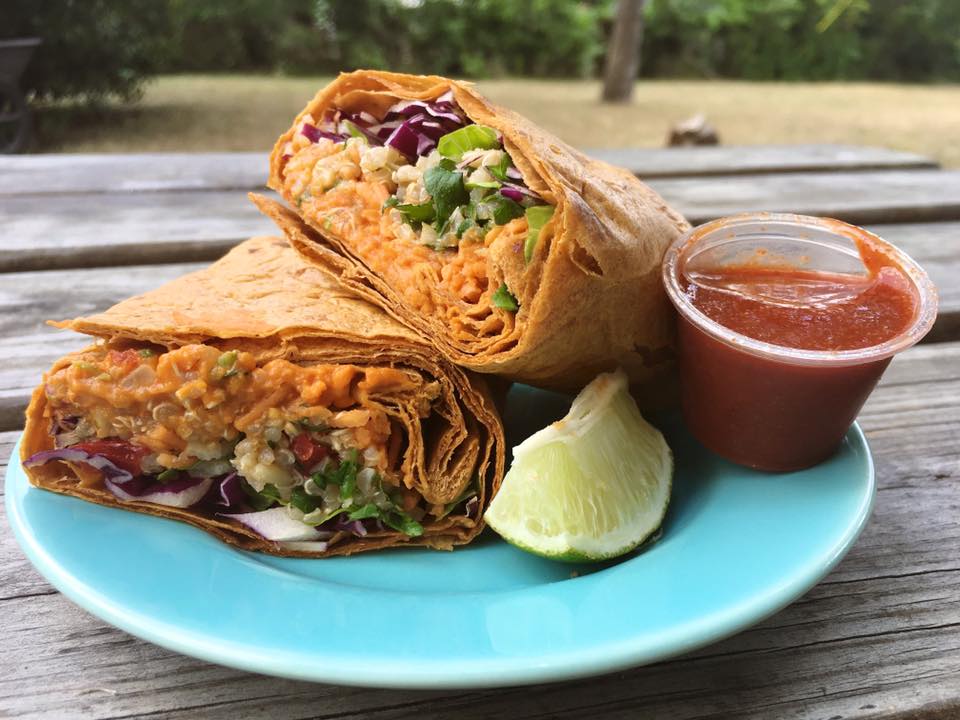 The Frijole Roller is packed with deliciousness. Photo via Facebook.

Unlike The Originator, food option favorites are constantly changing. Best sellers used to be the Mid East Feast and the Double Rainbow Quinoa Salad. However, Shook says the current fan favorite is the Frijole Roller Burrito, an organic flour tortilla chock-full of ingredients like spinach, mushrooms, sun dried tomatoes, a black bean spread, and vegan sour cream (just to name a few). We’re curious to see which grab-n-go item takes the top spot next.

If you’ve looked at JuiceLand’s menu, you’ve probably come across a knee-slapper or two. For example, the currently food fave Frijole Roller, the Un-Believe-A-Bowl, and the I Love Being Jalapeño Business shirt, which gets us laughing every time. From menu items, to accessories, to slogans and posters stamped throughout the stores, JuiceLand’s pun game is on point.

Bundle up and treat yourself to an Acai Bowl!

We’ve all seen JuiceLand at ACL and other music festivals, but did you know the brand operates a record shop as well? Exploded Records is located at the Hyde Park location on 45th and Duval. The fully stacked record shop features a range of music from hip hop to electronic to beat music to jazz to psych rock. Check out smaller vinyl selections at other JuiceLand locations.

13.) The shop goes beyond a vinyl collection

JuiceLand’s love for music extends beyond their in-store vinyl collection. In 2013, JuiceLand partnered with local producer and DJ, Andrew P. Brown, to run the Hyde Park shop and become the JuiceLand’s music manager. He also operates JuiceLand Music, the brand’s overarching music umbrella that includes JuiceLand Radio and JuiceLand Podcasts. Each month, Brown curates a playlist of tunes that further embrace and reflect the JuiceLand life. You can subscribe to receive the playlists on JuiceLand’s website or listen on SoundCloud.

14.) JuiceLand believes in lending a hand

Every month, JuiceLand creates a special smoothie of the month using seasonal ingredients to support local nonprofits that share a passion for wellness and food security. Part of their “Feel Good, Do Good” program, JuiceLand donates 50% of the special smoothie sales to that month’s partner organization. Previous recipients include Urban Roots, The Sims Foundation, and Foundation Communities. Stores in Austin, Dallas, and Houston are active participants.

JuiceLand takes great pride in its staff and juice family. That’s why they offer a Fresh for Life program. The program offers scholarships to staff members towards bettering themselves. Such enrichment programs have included included meditation, yoga teacher training, and higher education.

16.) The JuiceLand family is always smiling 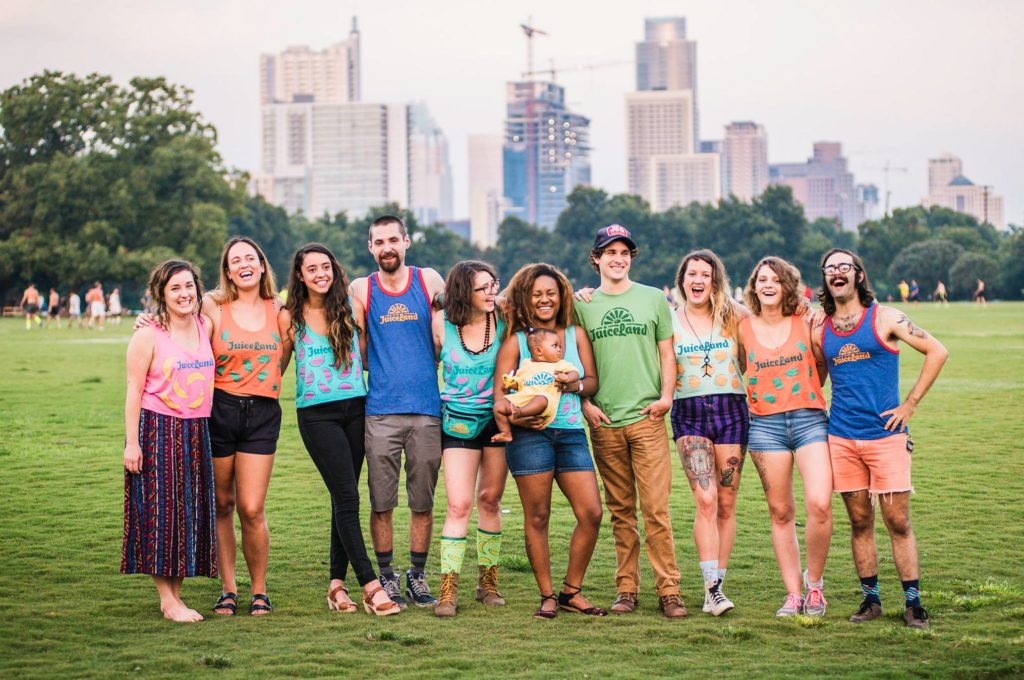 Just take a look at JuiceLand’s Instagram—whether they’re serving juice at ACL or chatting with customers, the JuiceLand family knows how to enjoy life. And if you need any more convincing, the company party was held at Barton Springs Pool, a daylong celebration where the entire staff was invited to spend the day floating in fruit shaped floats.

It’s not an everyday occurrence, but ever so often, customers are greeted with a dancing unicorn. Yes, that’s right—a dancing unicorn. Don’t be alarmed, though, the person behind the mask is likely JuiceLand Founder Matt Shook.