10 Majestic Austin Trees That Will Inspire You

Austin and nature go together like all of those classic pairings of things that were obviously made to be combined — peanut butter and jelly, iced tea and porch swings, summer and natural swimming holes, and, of course, Austin trees!

In fact, according to National Geographic, 37% of our fair city is covered by trees, creating the second largest urban tree canopy in the U.S. next to Pittsburgh (42%). Thanks to local groups like TreeFolks, and our Urban Forest Plan, a program that the city council adopted in 2014, this trend will hopefully continue even as Austin grows.

As a community, we’ve been able to protect some truly majestic Austin trees over the years. These 10 local live oaks, cypress, and pecans have been thriving for hundreds of years, inspiring self-confidence, appreciation for natural beauty, and of course, trunk hugs.

Here Are 10 Majestic Austin Trees That Will Inspire You on Arbor Day or Any Day!

Treaty Oak was inducted into the American Forestry Association’s Hall of Fame for Trees in 1927 when its branches spread more than 128 feet. Though most people know about McKinney Falls State Park for its two amazing natural swimming holes — the Upper and Lower Falls — another of the park’s crowning jewels is a 500+ year-old bald cypress tree named Old Baldy.

The epic tree is located in a prime spot along Onion Creek that allows it to soak up as much water and nutrients as it wants. At its last measurement, it was 103 feet tall with a trunk 60.5 inches in diameter.

Location: McKinney Falls State Park, along the Rockshelter Interpretive Trail, which starts at Smith Visitor Center. Check the website or call ahead before you go because the Visitor Center and trail is often closed due to flooding damage.

A lesser-known, impressive oak tree adorns the front yard of Johnny Radelat, who you may know as the drummer for Gary Clark, Jr. In 1976, the Encino Oak reportedly had a 24’8″ circumference at its base.

According to a Reddit user who photographed the tree and spoke with both Radelat and a UT professor who lives down the street, the large mound in the lowest branch contains a beehive that has become “too much a part of the tree to be removed.”

In late 2015, the University of Texas conducted a survey of of their best trees on campus. Among all of the trees they studied, the three Battle Oaks growing around the Barbara Jordan statue reign supreme as the oldest and most iconic of UT’s trees.

The Battle Oaks predate the university (which opened in 1883) and the Civil War. According to the study, the Battle Oaks were part of a much larger oak grove that was destroyed by Confederate troops to fortify the capital against Union invasion.

In 2011, the Austin Heritage Tree Foundation selected a huge pecan tree in Zilker Park near Barton Springs Pool as their 2011 Tree of the Year, dubbing her “Mother Pecan.” She’s also a popular spot for people to do outdoor yoga in the park. 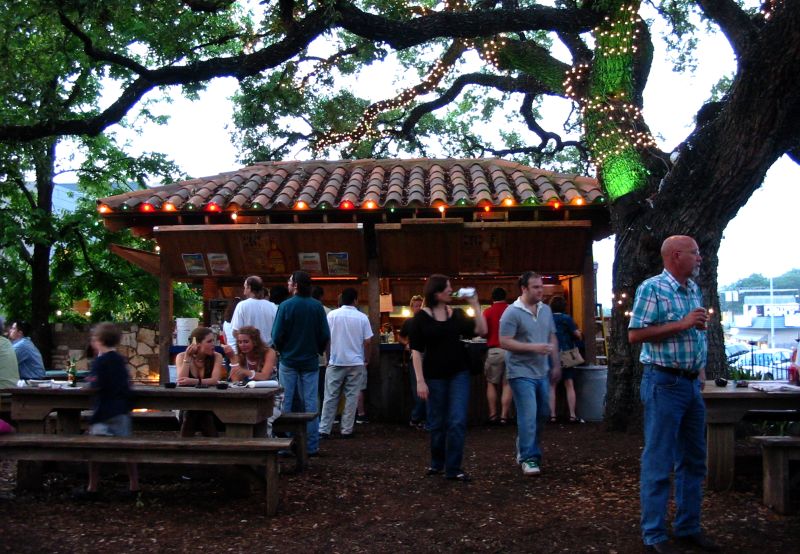 Guero’s Taco Bar contains one of the most beloved oak groves in town — but according to Reddit user AlienHatchSlider, when owners Cathy and Rob Lippincott first purchased the property, they intended to build a parking lot instead of an outdoor patio space.

During one SXSW, Rob reportedly told AlienHatchSlider that he originally felt frustrated when the city wouldn’t let him remove the trees, but that he has since had a change of heart. Now, he adores the trees and the atmosphere they create for patrons. Good job, Rob! 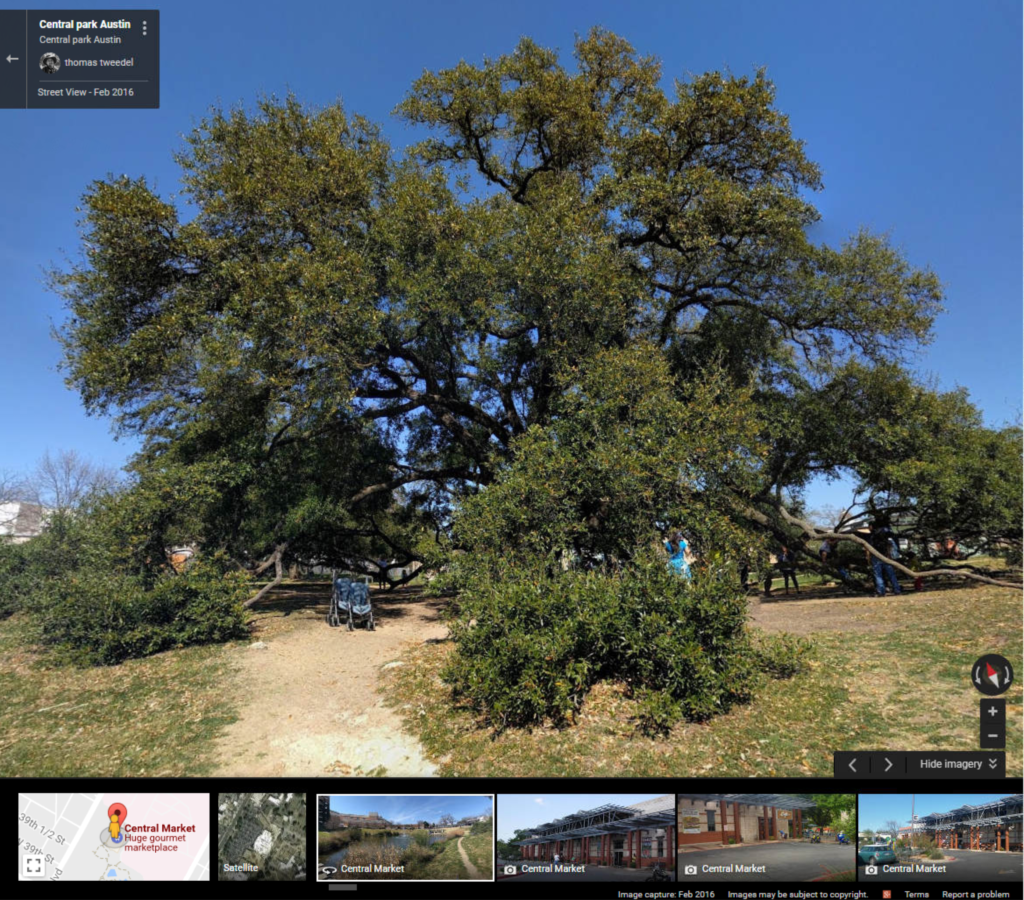 Venture back behind Central Market’s North Lamar location and you’ll quickly spot a giant live oak tree in the park. This tree is generally referred to as the “Central Market Oak,” but was revered long before the popular neighborhood market planted its roots nearby.

Years ago, Austin State Hospital owned that land. The rumors say that patients would often sneak out to a “Yum Yum Tree” to spend quality time together. Based on the Central Market Oak’s age and low, seclusive branches, it’s a good bet!

Location: Central Market – North Lamar, in the park behind the store.

Within the Seider Springs Greenbelt, you’ll find a beautiful grove of huge live oak trees that are known as the Seiders Oaks. According to the Texas Forest Service, these trees were big even back in the 1830s when Austin was first being settled.

At one point, the Seiders family built bath houses, picnic tables, and a dance pavilion along Shoal Creek to encourage locals to visit the grove and it has continued to be a well-loved outdoor recreation destination for the Austin community into the present. 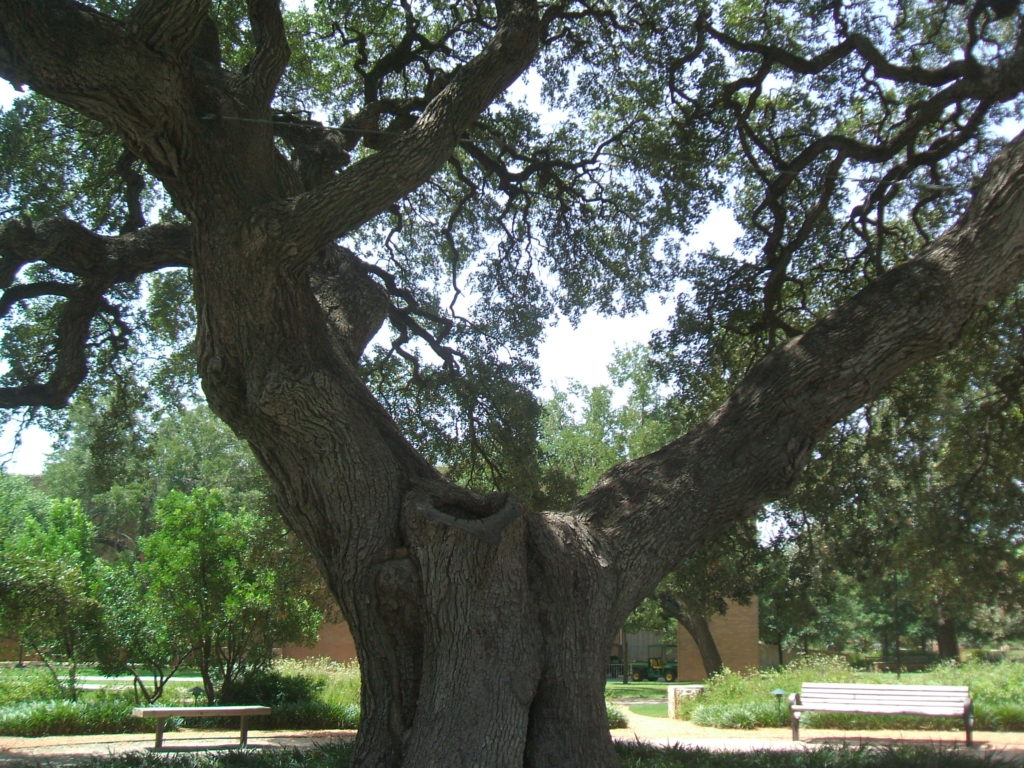 St. Edward’s University‘s groundskeepers have done an amazing job preserving Sorin Oak, a 250-300+ year old, 43-foot live oak, through the years. Growing beside the Main Building, the tree has survived both a tornado and fire, plus extensive campus development.

Sorin Oak boasts a trunk diameter of 67.5 feet and a crown diameter of 82 feet, and it even runs its own Facebook page. While you’re on campus, give the Bent Tree some love too.

Though not quite as large as Old Baldy, this bald cypress located on the southwestern bank of Red Bud Isle is quite a sight to behold — and it’s easily huggable because there’s a trail that leads right down to its base. This beauty won AHTF’s 2009 Tree of the Year award and has the plaque to prove it! Sit on the nearby bench and stay awhile.

When you’ve given all ten of those majestic Austin trees big bear hugs befitting their grandeur, keep in mind that you don’t have to stop there. You’ll find many more huggable trunks in this historic tree registry and in the Texas Forest Service’s Famous Trees of Texas archive.

We also suggest driving by the new largest live oak in town, which is located — alas — on private property at US 183 and Bolm.