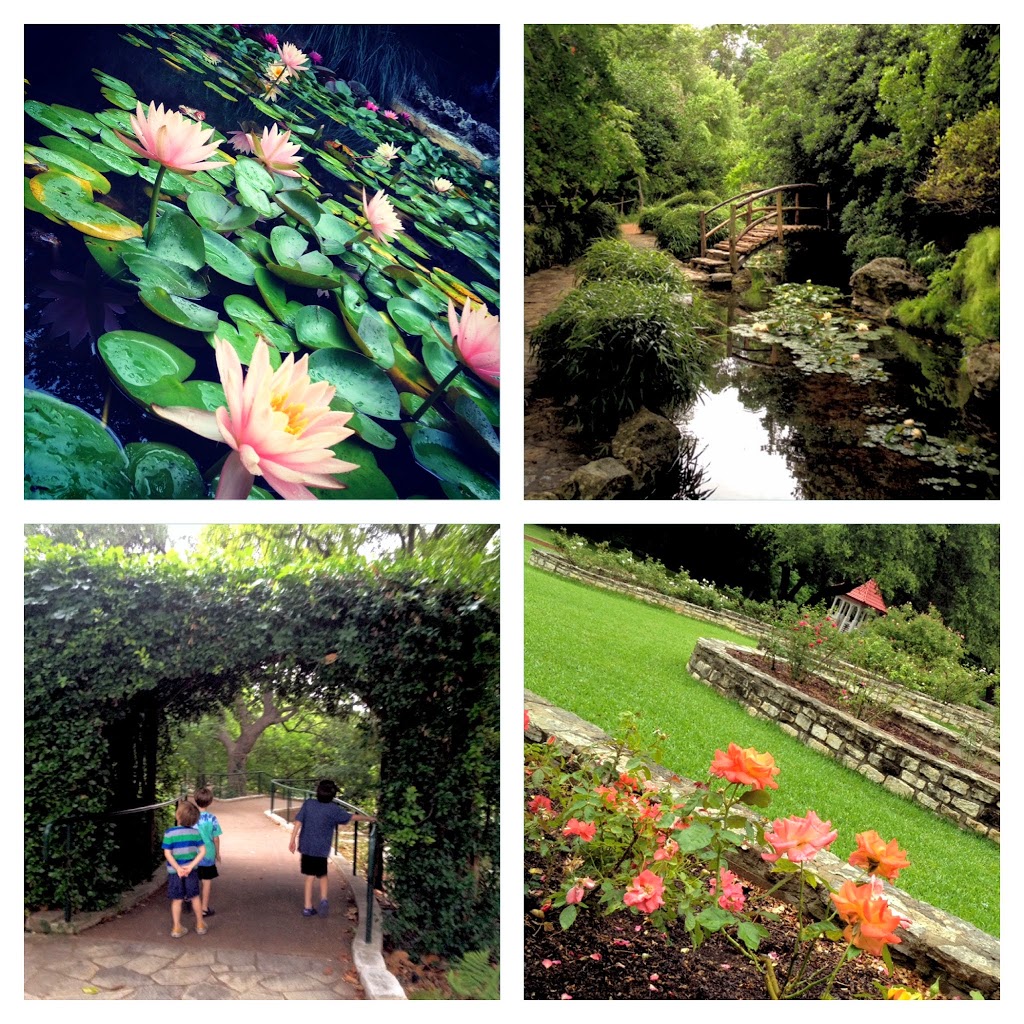 Zilker Park always promises a good time, and there are so many reasons why it’s considered “Austin’s most-loved park.”  It seems to offer an endless supply of fun for children. No matter if I suggest going to the playground, riding the Zilker Zephyr, digging for dino bones at the Austin Nature and Science Center, or just climbing on the big rocks and running in the field, my kids will always unanimously say “YES!” when asked if they want to go to Zilker.

My personal favorite part of the park is the Zilker Botanical Garden. Visiting on Mother’s Day has always been a tradition for us, but no special event is needed to stop in and enjoy its beauty. My boys and I went this past Monday morning (in the rain, no less) and had a great time.

The Zilker Botanical Garden is located on 31 acres of varied topography that shows off an array of native, hybrid and exotic plants. For a low fee of $3 for children (ages 3-12), $5 seniors (age 62 and over), $6 for adult residents of Austin (ages 13-61), and $4 for non-resident children, $8 for non-resident adults (ages 13-61), you can explore a Japanese garden with koi ponds, a Pioneer Village that includes a cabin built in 1840, the pretty rose garden, a butterfly trail, a cactus trail, and the Hartman Prehistoric Garden that showcases a statue of an ornithomimus surrounded by plants originating from the Jurrasic period.

After parking in the lot, the first thing I suggest is to pop into the Garden Center and pick up a map. There you can also find a printed “nature challenge” to follow with the kids. My kids have not yet done the challenge because they are always motivated to explore the grounds on their own plan, but one of these days we’ll have to try it out. The website also offers a self guided tour guide (pdf) that is designed for school teachers, but it could also be of interest to parents wishing to guide their kids through the park with bits of educational information. While in the Garden Center, it’s also a great idea to stop for a bathroom break before heading off on the trails. 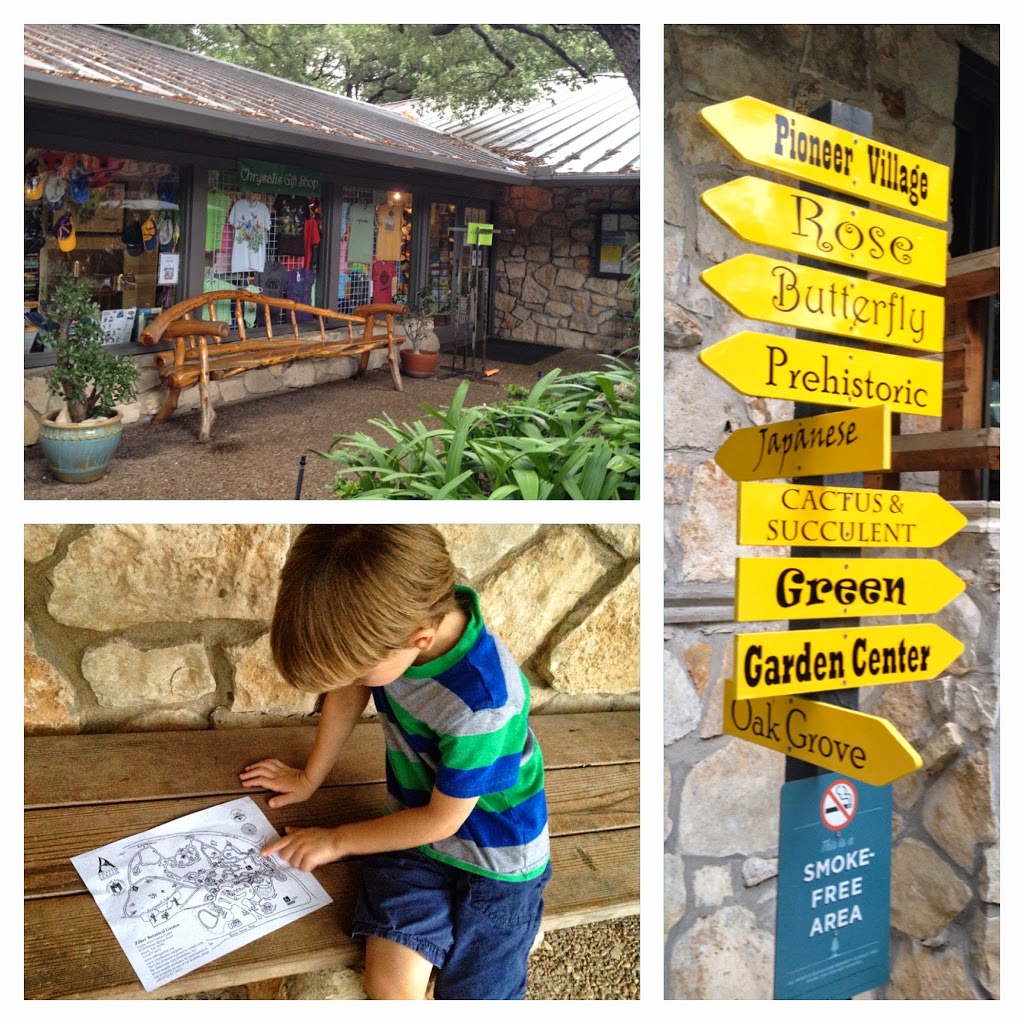 My boys are usually most interested in the butterfly garden and the Hartman Prehistoric Garden so that’s the direction we head first. When we arrived on Monday, a section of the Pioneer Village was roped off and under construction. (If this area is of great interest to you, I suggest calling before you go to inquire about its renovation status.) We found ourselves by the Vegetable Garden and the Swedish Blacksmith Shop when the skies grew dark and it started to downpour. Lucky for us, we could take shelter in a convenient (and adorable) gazebo nearby long enough for me to act out scenes from The Sound of Music and embarrass my kiddos. 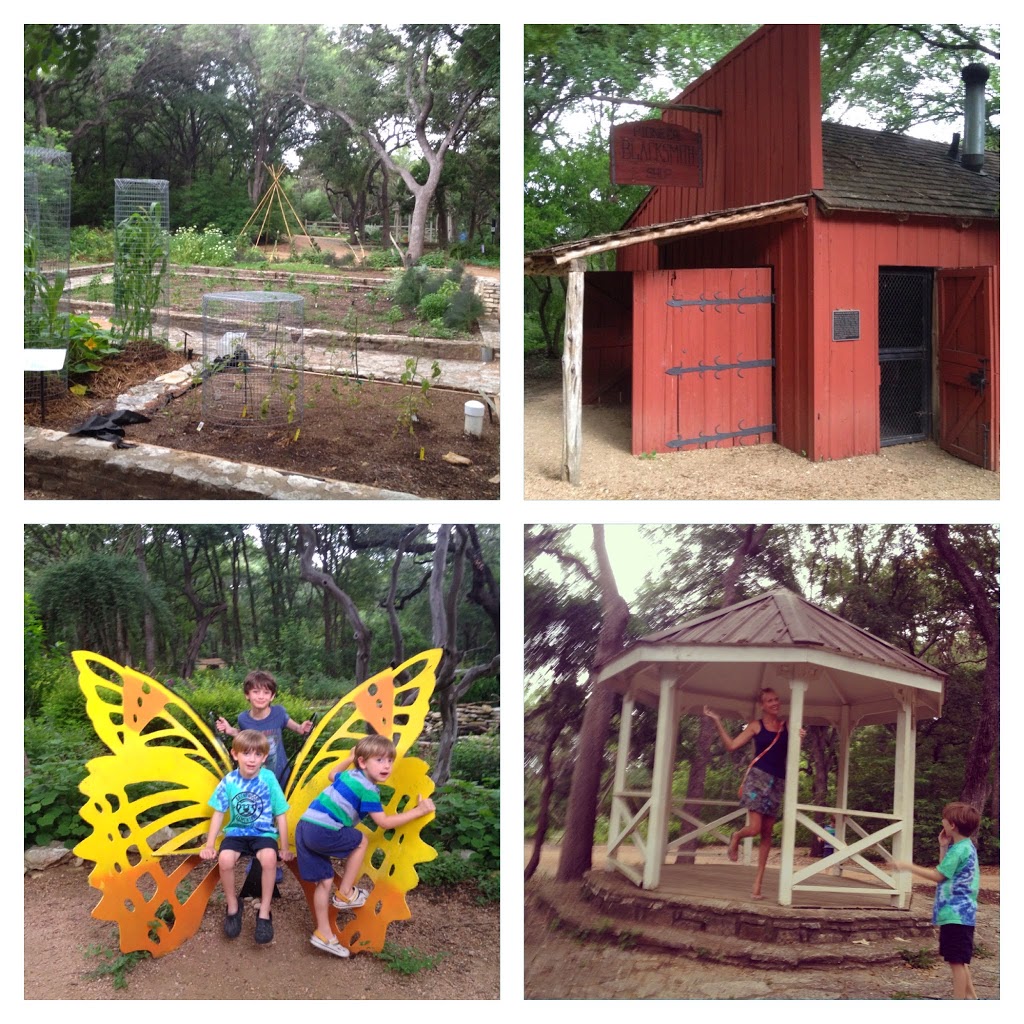 The kids were energized by the rain and found that it added more excitement to our adventure. Once the rain was down to a drizzle, we headed down the path towards the Prehistoric Garden. By this time, the kids were acting out an elaborate story of dinosaur hunters, and I was merely trailing along behind. They pretended to hear footsteps of a great T-Rex, they pointed out giant palms and ferns, and (man-made) footprints on the path. They love the little waterfall in that area of the park, and we were all taken with a little green heron that was catching fish just under the waterfall. The boys had great fun spotting the ornithomimus statue through the trees. And by this time the rain was pouring again and we were being eaten by mosquitos, so I had to move things along quicker than they preferred. (Learn from our mistake and don’t forget to put on bug spray before you go.) 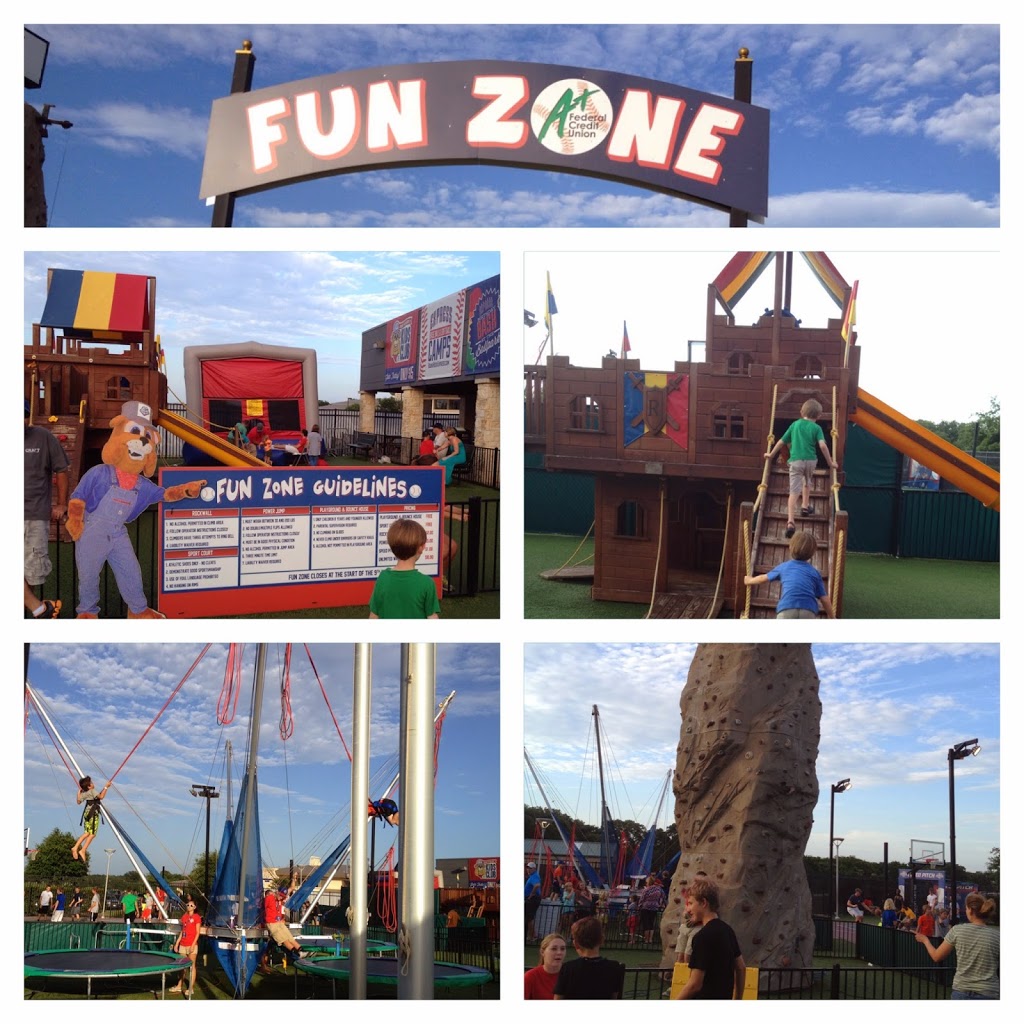 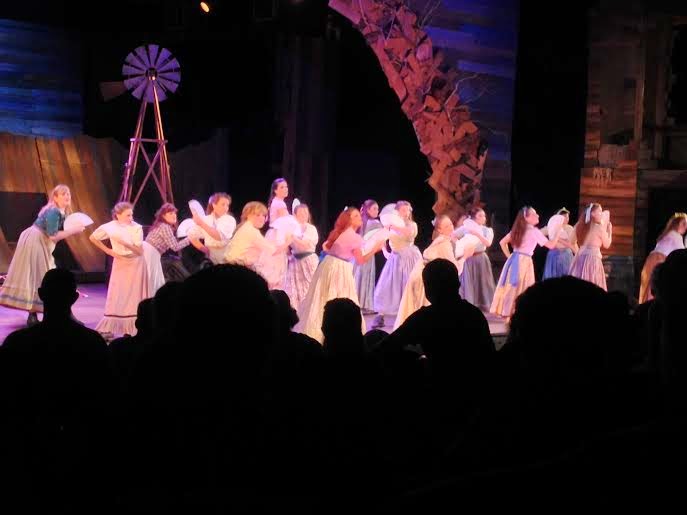 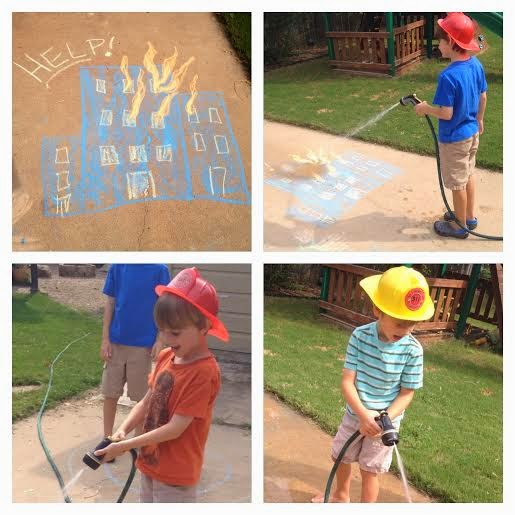 We made our way through the Rose Garden where the kids argued over which flower I might like best. (Three boys can ALWAYS find something to argue about!) We took a few moments at the pond by the cupola to spy a tiny baby turtle and some various fish. 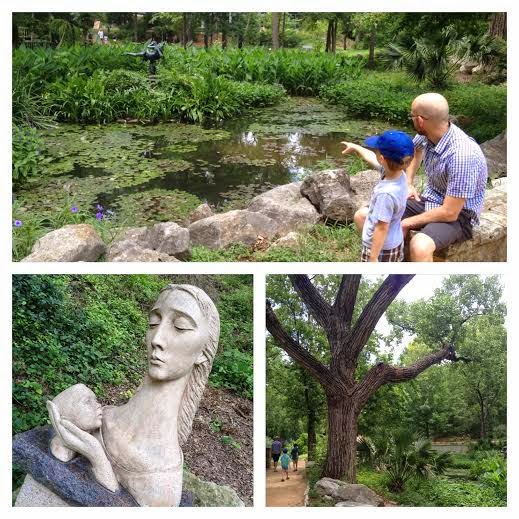 We ventured on to the Japanese Garden and couldn’t believe the size of the koi swimming around with long, fancy tails. The kids pretended the Japanese Tea House was a “jail that bad ninjas locked them into” (not a lot of zen moments for them, but they thoroughly enjoyed their pretend play). And they were thrilled walking through the bamboo trail, laughing hilariously at me when I unknowingly leaned against a rock wall covered in daddy longlegs. (Yikes!) 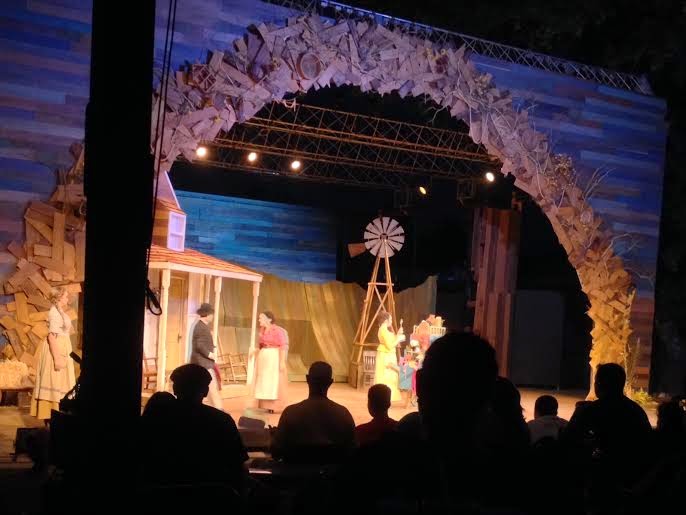 On this trip to the Botanical Garden, we were not able to walk around the Cactus Garden because we ran out of time before the big rainstorm hit with booms of thunder. This did save me from constantly yelling, “Watch out for prickles!”. But we’ve enjoyed it previously, and it’s certainly worth checking out to see some impressive native plants.Know Before You Go:

Freelance web producer, Heidi Okla is mom to three boys (ages 4, 6, and 8), and can’t pass up any opportunity for fun family adventures.