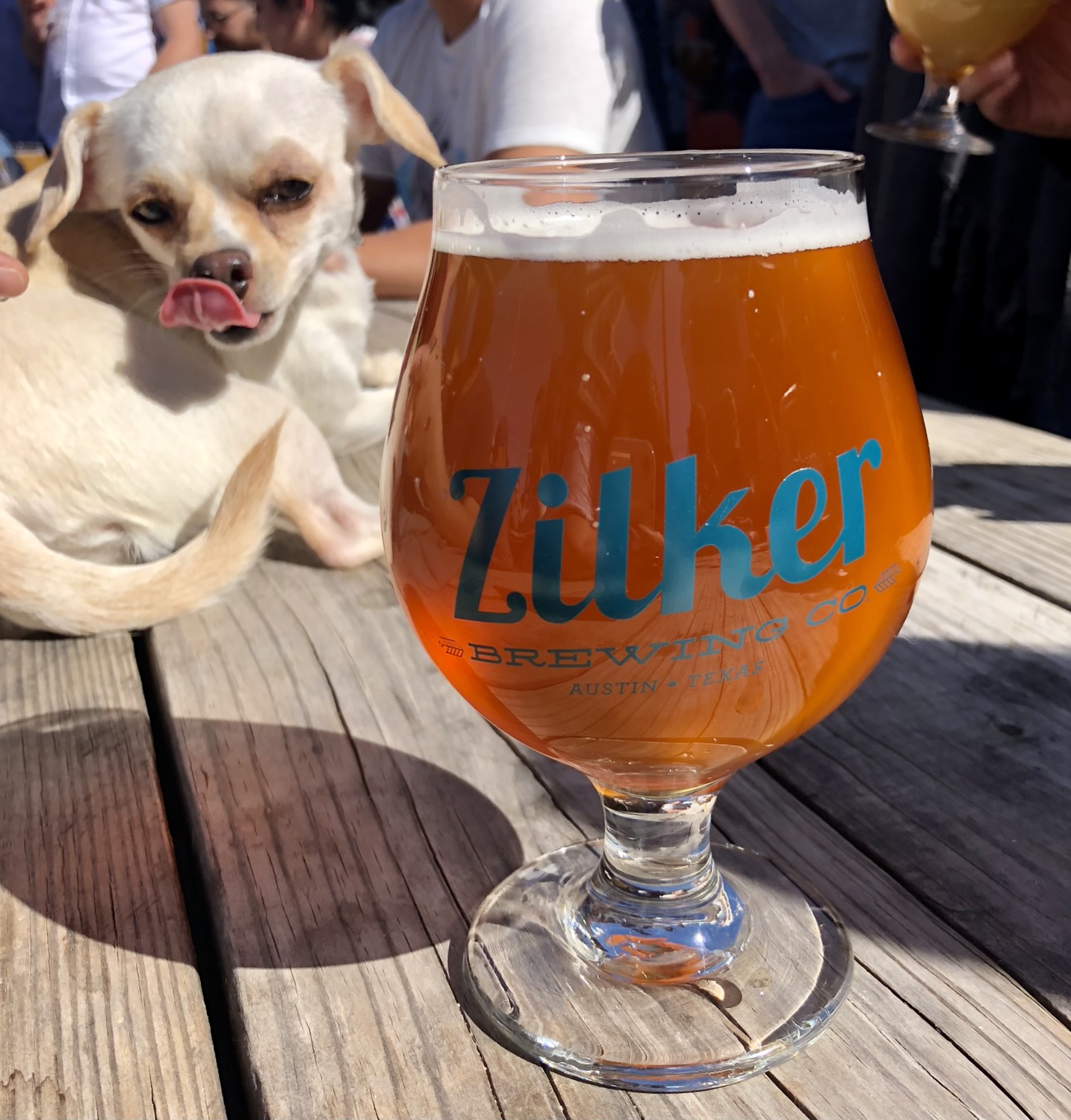 Anyone who lives in Austin knows that we are spoiled rotten with breweries and good craft beer. North, south, east, and west, there are at least three to 10 breweries in every area of Austin and almost 60 in the entire city! Whether you’re visiting the taproom for the beer or looking for a quiet place to work, we have your list of the best Austin breweries to fit all your needs!

If you’re looking for good beer all around:

Dedicated to using locally sourced ingredients in their beer, (512) Brewing is known for their Pecan Porter. The beer is infused with Austin-grown pecans, adding a robust and malty flavor.

Pinthouse’s bread and butter, Electric Jellyfish, is brewed with a number of hops, bringing you a bright, citrus new school IPA. While they’re known for their pizza, this brewery is opening up a brand new brewhouse and taproom in early 2021.

In the heart of East Austin is this cozy taproom featuring one killer brew, their Coffee Milk Stout. At 5.8% it won’t overwhelm you so you’ll be happy to get back in line for another. They also have a ton of other fun beers with rad names, and are rotating their packaged beers very frequently.

If you’re looking for weird beers:

Started by a few Austin transplants, 4th Tap is brewing some funky beers in the 78758 area. Grab a pint of their Supernaut Neopolitan, an Imperial Stout made with fresh strawberries, vanilla, and cacao. Their taproom also features retro arcade games and a large projector screen.

In the mood for a purple beer? in early 2019, Thirsty Planet brewed a purple beer, appropriately named Cosmic Butterfly. This Berliner Weisse Kettle Sour is brewed with blue butterfly pea flowers to give it its vibrant purple hue. Their taproom is right off South Congress!

This North Austin brewery has two goals: to make exceptional craft beer and to build community in Austin. And they’re doing just that. ABW recently renovated their taproom and brewhouse and boy is it impressive. While their core beers are pretty standard, their taproom offers some wild IPAs, a Sour Stout, and some funky Wheats.

If you’re looking for a dog-friendly brewery:

The first brewery in the 78758 area code is completely dog-friendly, inside and out! Circle will also host dog-friendly events like their 0.5K and a Howl-o-ween, complete with costumes. The two childhood friends that started the brewery focus on using the four main ingredients for beer and nothing else: hops, yeast, malt, and water.

This newer brewery, started by two brothers, allows dogs inside their cozy taproom and outside on the patio. They also serve sandwiches and bar snacks, as well as beer to go!

Dog-friendly inside and out, this North Austin taproom and brewery is Austin’s only copper kettle taproom and it is stunning. Known for their Celis White, the brewery and operations is now overseen by the owner’s daughter.

If you’re looking for good food with your beer:

This German-style brewery is serving up good beer and delicious German food with a modern twist. They have the favorites like Currywurst and Chicken Schnitzel, but they’re also putting their spin on a traditional German-style pizza called Flammkuchen. Pair with their Electric Lederhosen and you’ll be saying Prost!

It’s hard to find bar food done really well but Hold Out is doing it. Located off West Fourth Street in downtown Austin, the folks here are constantly adding new and exciting dishes to their menu, like Poutine Tater Sticks or Roasted Sweet Potatoes with Cranberry-Pecan Salsa. Wash it down with their Liquid Television Pale Ale and you have yourself a killer lunch date.

If you’re craving a kolache and a beer on a weekend morning, plan to get line early at Batch Brewhouse. With flavors like chocolate pecan, brisket, and jalapeno sausage, folks get there early. They brew their own craft beer, keeping six to eight beers on tap at a time. You can also snag package beers from local breweries around the state or sip on their Batch Brewhouse coffee.

Tucked into a cozy warehouse space on the East side is Blue Owl, an all sour brewery. If you’ve never sipped on a sour before, this approachable drink brewed at Blue Owl has an intentionally acidic, tart, or sour taste (hence the name). While they are still technically serving beer, you can order creative styles like their Sour Session Beer with Earl Grey or a Plum Jam and Orange Marmalade Sour.

Once a metalworks and machine shop that produced airplane parts during World War II , Central Machine Works has turned into a giant taproom and biergarten while still holding onto the blue-collar feel. Not only do they brew their own beer, but they serve a wide variety of cocktails, wine, cider, and even boozy popsicles.

Visit this warehouse brewery off South Congress if you have beer drinkers, wine drinkers, and cider drinkers in your group. Last Stand has plenty of beers on tap as well as cider, red wine, white wine, and even sparkling wine. Pair with some pizza or wings and we’re sure everyone in your group will be happy!

If you’re looking to get some work done while drinking a beer:

Not only is Black Star a great brewery with food and beer, but they have tons of seating inside and out so you can grab a chair, a beer, and get some work done. We also love Black Star because it is the first co-operatively owned and self-managed brewpub not only in Austin, but the entire country!

The aesthetics of Central District put us in the mood to hop on our laptop and work away. Located downtown off Red River, the interior features minimalist Edison bulbs and cool plant hangers. Now onto their beer. They have almost every style of beer you could want, plus flights and food.

Early risers rejoice! Lazarus, located in East Austin, opens at 7:30 a.m. Monday through Friday. With a cozy feel, you can grab a coffee or espresso and a breakfast taco while you bang out some work. Later, reward yourself with one of their many great beers.

If you want to take the beer home with you:

Picking up a friend form the airport? Surprise them with beer on your way home from at Hi Sign. Pick up a six pack (or two!) after you stop by the brewery for a beer. This warehouse style brewery is located right off Bastrop Highway. Our favorite is the Hi-C IPA, a super juicy IPA.

For an afternoon weekend beer, check out Friends and Allies off Springdale Road. A no frills kind of brewery with a food truck, good beer, and patio seating – what more could you want? They’ve been canning their beer since 2018 and sell right out of the taproom. The Blackberry Bearliner Weiss is a unique and tasty brew that you can’t find anywhere else.

St. Elmo’s beer selection is constantly rotating so you always have a new, fresh beer to choose from. Have a pint at their south Austin beer garden with a sandwich from their Thai-inspired food truck, then take a crowler (which is 32 ounces) home with you! Carl, their Kolsch, is the perfect beer to pair with any food.

If you’re looking to have a beer with a group of friends:

For a larger group, especially one with children, Meanwhile has tables galore on their half Astroturf, half mulch playground backyard. Groups can choose from three different food trucks as well as a wide variety of locally brewed beer, coffee, wine, and seltzers. We’re on a juicy IPA kick, so our favorite brew from Meanwhile is their New England style IPA, Tender Robot.

The Hopsquad taproom is bright, lively, and just plain fun. With plenty of space for larger groups inside and out, the taproom features colorful graffiti on the warehouse walls and an array of beautiful plants with comfortable couches. We’re big fans of their American IPA, Lord Zanate and their Japanese food truck, Tsuke Honten.

If a brewery and taproom from Denver opened up in Austin, then you know they’re going to have good beer with a fun vibe. Oskar Blue’s taproom features a large patio, a giant wrap around bar with table seating, and then an additional space in front of a stage where live music is occasionally played. This taproom is a great hang where your group can choose different areas of the taproom to have a pint of their One-y 100 Calorie Hazy IPA in.

Looking for more spots in and around Austin to have a drink? Check out these posts: