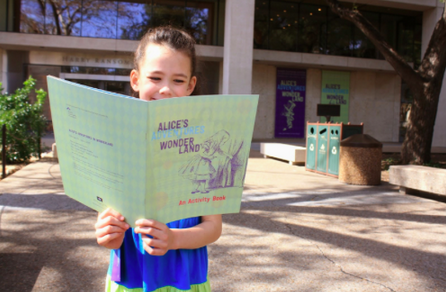 The Harry Ransom Center presents the Young Adventurers Film Series, in conjunction with the Center’s current exhibition “Alice’s Adventures in Wonderland,” on view through July 6, 2015.

Saturdays in June, Austin families can enjoy free movie screenings in the Ransom Center’s Charles Nelson Prothro Theater, starting at 3 p.m. The theater has limited seating and seats are available on a first come, first serve basis. The line forms upon arrival of the first person, and doors open 30 minutes in advance.

The Harry Ransom Center’s Young Adventurers Film Series kicks off with Disney’s film Alice in Wonderland (1951). Drawing on Lewis Carroll’s books Alice’s Adventures in Wonderland and Through the Looking-Glass, the film has become one of the most popular representations of the Alice stories. Run time is 75 minutes, and the film is rated G.

Adapted from Roald Dahl’s classic 1961 book, the stop-motion animated film James and the Giant Peach (1996) follows James on his journey in a giant peach with a group of insect friends. Run time is 80 minutes, and the film is rated PG.

Based on Neil Gaiman’s award-winning novella, the movie Coraline (2009) tells the story of Coraline, who wishes for more perfect parents and finds an alternate world where she discovers that all that she wished for is not, in fact, what she wanted. Run time is 101 minutes, and the film is rated PG.

Where the Wild Things Are

Spike Jonze’s film Where the Wild Things Are (2009), which was adapted from Maurice Sendak’s childhood tale, tells the story of Max, who sails to the island of the Wild Things and becomes their king. Run time is 101 minutes, and the film is rated PG.

Harry Ransom Center at The University of Texas at Austin
21st and Guadalupe Streets
Austin, Texas