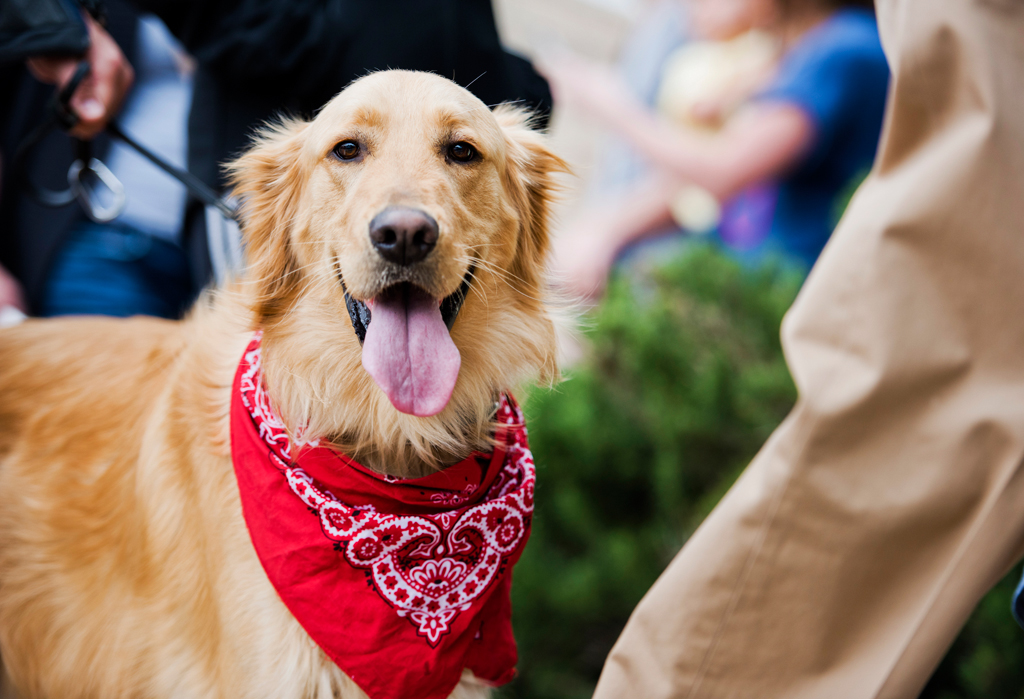 Question: What do you get when you combine Austinites’ fondness for dogs with the charisma of SoCo and a spoonful of classic Austin quirk? Truthfully, those three ingredients could combine to form any number of canine-centric events, but Liz Lambert, owner of Hotel San Jose, has come up with a perfect brew: Jo’s 16th Annual Pet Parade and Costume Contest.

Calling itself the “Doggie Drag Show of the Year,” Jo’s Pet Parade took place on Saturday, April 4 from 12 to 3 p.m. along South Congress Avenue. The parade, which began at Hudson’s Meat Market and ended in the parking lot for Jo’s Coffee and Hotel San Jose, featured more than one hundred dogs. Dead Music Capital Band and the Easter Bunny lead the charge, along with festival organizers and their pups.

Upon arriving in the parking lot, guests were encouraged to stock up on eats and drinks from Jo’s, bob their heads to The Andrew Nafziger Trio‘s tunes, drop by the Austin Pets Alive! dog adoption center, and browse the booths of other local pet-friendly vendors, including Woof Gang Bakery and Grooming, Mud Puppies, Austin Dogtown and Groomers, and Brothers Barkery. Kids seemed just as excited as the dogs, thanks to the inflatable bounce house, face painting, cotton candy, and opportunities to pet friendly pups and mob the Easter Bunny.

Between 200 and 300 Austinites and out-of-towners attended the event, both with and without animal companions.

“It’s kind of a South Congress tradition,” said the event’s marketing director, Isadora McKeon. “People get really into it, and dress up themselves and their pets. Imagine one hundred or more crazily-dressed Austinites parading down the street with pets in outfits to a marching band. Then we end up in the parking lot and have a costume contest for the animals, which is always kind of magically chaotic.”

Thirty dogs entered the costume contest and promenaded one by one — or in some cases, two by two — with their caretakers across the festival stage to win the affections of audience members and judges alike. Some dogs eagerly pranced around and performed tricks on command, while others licked the faces of the folks standing stage front or tried to shake off their costumes in protest.

Even the “Fifty Shades of Grey” duo behaved… mostly. Though most locals bring their dogs to the Pet Parade, in actuality, any animal that wouldn’t be intimidated by loud music and large crowds is invited.

“We’ve seen chickens, rabbits, cats, all kinds of animals,” said McKeon. “As long as your animal is into parades and costumes, it’s welcome.”

Lambert founded the event 16 years ago in memory of her brother, Lyndon, who left behind a legacy of pet advocacy and an ethical California-based pet supply company when he passed away. Lyndon named his business GEORGE after his beloved fox terrier, whom he often paraded around San Francisco dressed as an Easter egg. Since all costume contest entry fees ($10 per entrant) go Austin Pets Alive! and, since APA is largely responsible for transforming Austin into the largest no-kill city in the United States, we’re sure Lyndon would be proud he’s being remembered this way.

If you’re planning to show up next year for Jo’s 17th Annual Pet Parade, watch for logistical and pre-registration details on Hotel San Jose’s website around next March. Trust us — it’s going to be a tail-wagger!

In the meantime, here are some of our favorite non-placing costumed canines from this year’s shin-dig: