6th Street, just west of I-35, is a hodgepodge of veritable madness. You have shot bars and dance clubs that are ensconced into this gritty part of downtown’s DNA. Poking its head out of this sometimes seedy, always weird underbelly are some of Austin’s shining stars: spots like Easy Tiger, Daruma Ramen, even Casino El Camino and Jackalope can provide a respite from the particular kind of hustle ad bustle that you find on “Dirty” 6th.

Enter Waller Creek Pub House,  across the street from Easy Tiger and tucked back into an alley, it takes shape as an oasis from all of the aforementioned dinginess. An inviting patio would give way to a long bar with craft beers, specialty cocktails, and an encompassing who’s who of pub food. The space was considerable, many TVs outline the walls. It could be, but it didn’t really feel like a sports bar, which is my kind of place. When it comes to pubs the ones that work in the grey area seem to be the ones that excel. Waller Creek was certainly not an exception to this rule. 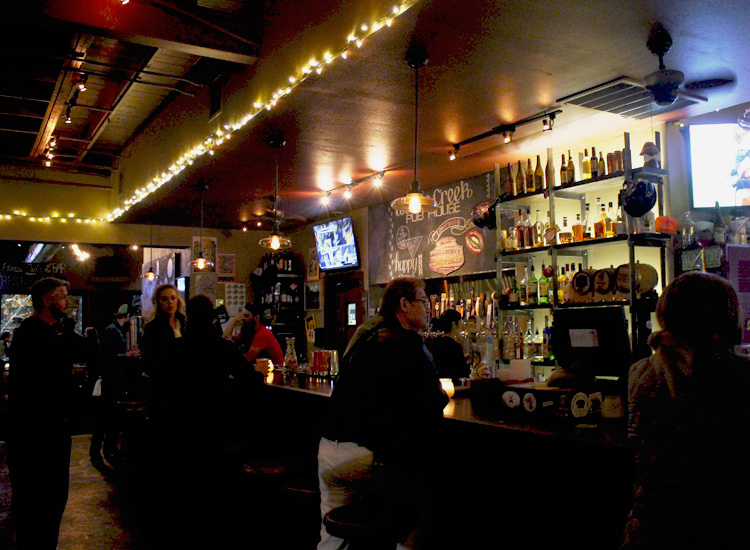 The first thing we noticed was there was no table service. You order drinks and food at the bar and are given a number, a system that’s been put into practice the world over. We’ve seen pretty much all iterations of this set up, and it worked well at Waller Creek, thanks to an attentive and efficient bar staff. The General Manager, James Horton, was behind the bar and was very forthcoming with fielding any and all questions we had. 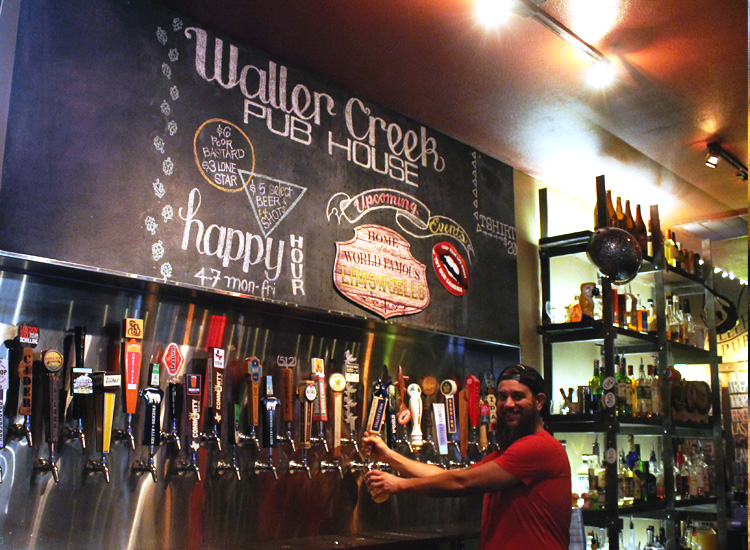 The menu was somewhat par for the course for a bar/pub, but had a few twists and turns. The first series of items that caught our attention was the “fancy fries,” which can either be added as a side with your entree or ordered in larger basket-esque portion. We decided to try the Greek and Asian fancy fries. The Asian fries are done straight up with peanuts, sriracha, cilantro, lime mayo, and hoisin sauce. The Asian fries were almost similar to what you’d get at Chi’lantro, minus the kimchi. Really tasty. They also have Buffalo and Italian varieties of the fancy fries. Working in the grey seemed to be a common theme, they were really good at throwing curveballs — ones that would be tough to hit from either side of home plate. 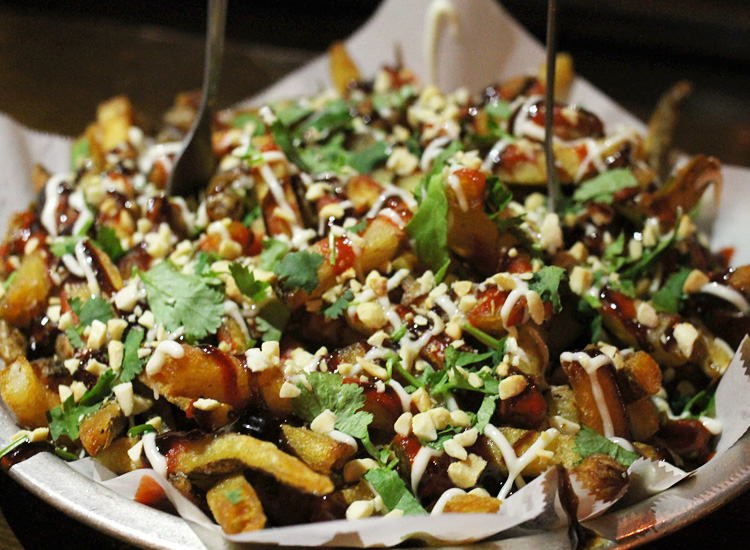 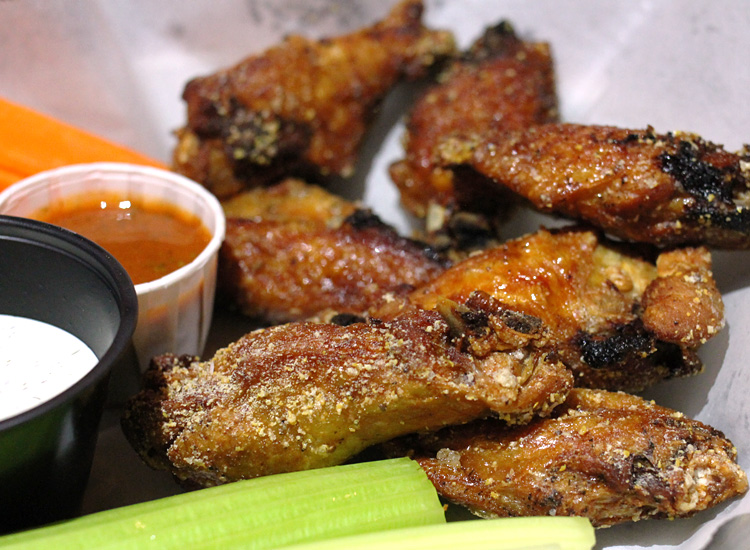 Next up, the wings were also really tasty and really interesting; they had a really good dry rub, one that’s made by the fine folks over at Oskar Blues (craft brewery based in Colorado that recently planted roots down here in Austin). The “Goodnight” Creole Mustard rub could be the only wing sauce that goes on all of the wings we eat, ever. I’m partial to the bakers gold and lemon pepper sauces/rubs that the fine folks over at Pluckers do; the goodnight rub was almost like a trio of the cajun, bakers, and lemon pepper sauces combined and muted, so you could taste everything. They also gave us a side of straight up hot wing sauce to dip along with some ranch and hot wing veggies (carrots and celery).

After some tasty apps, the usual suspects, burgers and sandwiches, came to fruition. We  tried the Reuben sandwich and the Hippy J, Waller Creek’s take on the age old veggie burger. Usually when pubs put a veggie burger on the menu it’s for placeholder purposes. After trying this one, this voracious beef eater can honestly say he’d consider ordering it instead of a traditional burger. Not just an appeasement, it was somewhat simple: chipotle mayo, lettuce, tomato, onion. We added avocado and cheddar, which, for this burger, made it pretty much the perfect veggie burger. Just in case you thought we forgot — you can also order the fancy fries as a side with any burger or sandwich, and we tried the Greek fancy fries equipped with an unbelievably tasty rosemary oil and melted feta. The Reuben was solid: beer-braised corned beef and sauerkraut piled high, with Swiss cheese and traditional Russian dressing in between greasy, toasted slices of rye. Doesn’t get much better. 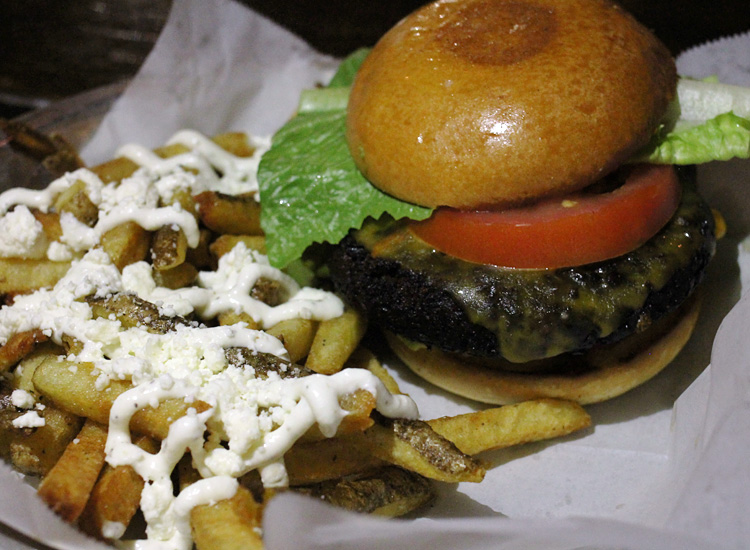 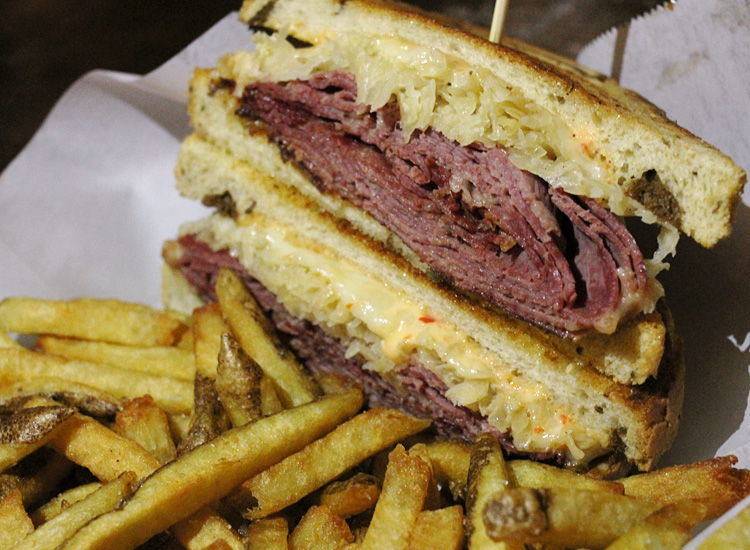 Last but not least, we washed everything down with some serious craft cocktails and beer. The Spicy Jack Ass, lived up to its name, and then some. Rye Jim Beam, agave ginger beer, lime, and FRESH jalapeños made this drink spicier than almost anything we’ve drank or eaten. The ample tap wall, which consists of about 30 or so taps, really offered up something for everyone. 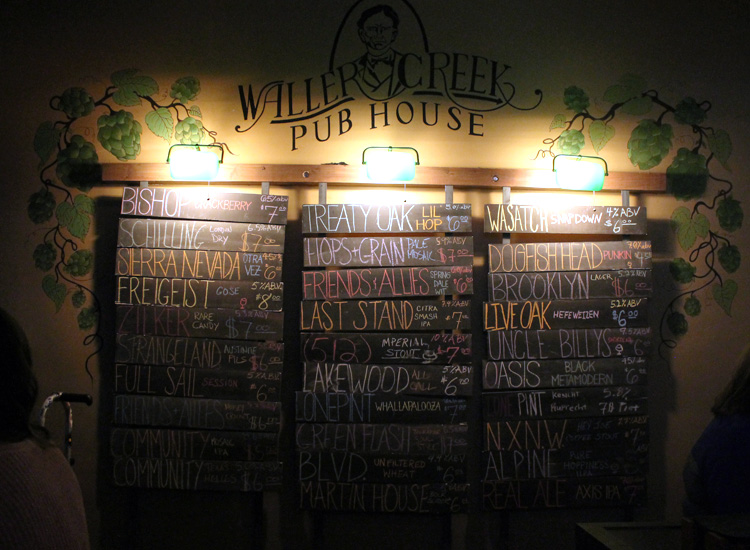 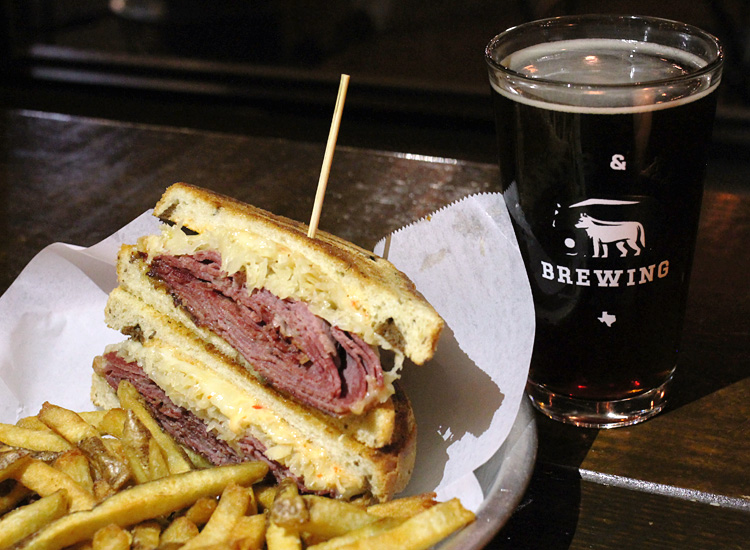 If you find yourself in the grips of Dirty 6th with little respite, look no further than the Waller Creek Pub for some seriously elevated pub food, interesting cocktails, and a tap wall that goes for days. 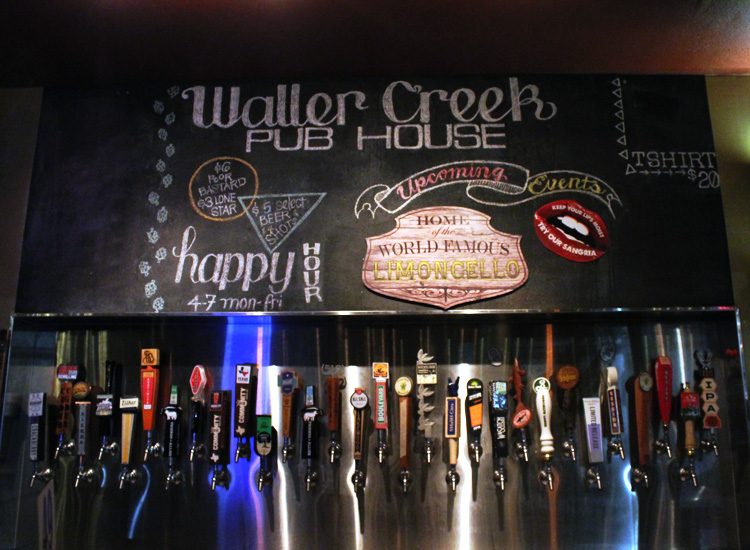