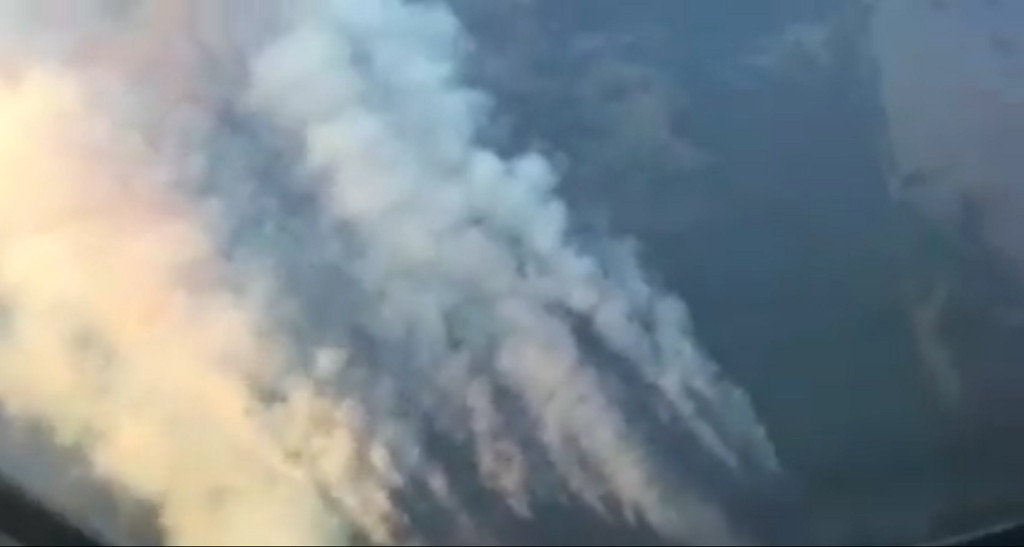 The Hidden Pines fire in Bastrop County, which started on Tuesday, had burned over 4,200 acres as of Thursday morning officials said — yet it remains only 15 percent contained. Dozens of homes have been evacuated and at least nine were destroyed, according to NBC affiliate station KXAN-TV. Another 150 are in danger as of this writing, and the county has issued a state of disaster declaration.

In a video published to Facebook on Wednesday, seen below, Austinite Patrick O’Brien captured the shocking scene from the air as he flew over the blaze in a passenger jet.

Bastrop Co. Fires From The AirFilmed 10/14/2015 by Austinite Patrick O’Brien. It gets REALLY shocking towards the end. For the latest on the Bastrop Co. Fires, click here: http://kxan.com/2015/10/14/hidden-pines-fire-continues-to-burn-in-bastrop-county/

Austin emergency officials said Wednesday that numerous calls have been placed to the fire department and hospitals due to the smoke blanketing the city. Residents are urged to refrain from contacting emergency services about the smoke unless they are truly experiencing life-threatening circumstances.

While the fire does not currently threaten the city, firefighters from as far away as Dallas are being called up to battle the blaze. On Thursday morning, Austin’s firefighters answered that call and began loading out to join other departments in Bastrop County.

Fire officials also caution Austin residents to avoid any activity that could potentially start a fire outside. Due to the severe lack of rain this summer, and a weather system that’s producing low humidity and high winds, conditions are just right for devastating fires to spread within the city.

For anyone looking to help provide emergency relief for the families affected by this disaster, evacuees are currently being sheltered at the Smithville Recreation Center.