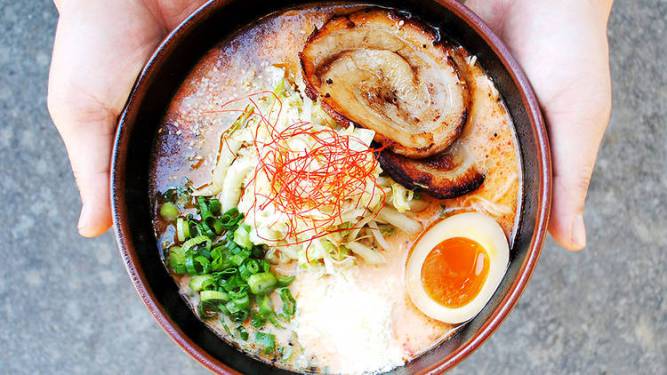 TimeOut.com just ranked Austin’s Ramen Tatsu-ya as the #1 place to get a bowl of ramen in the U.S. That three-day pork broth is downright irresistible to locals and visitors, alike. Thanks to owners Tatsu Aikawa and Takuya Matsumoto, Austin has beaten out L.A. and New York as the supreme slurp city. But fair warning — don’t read this list unless you’ve got your keys in your hand, ready to run out the door to one of Ramen Tatsu-ya’s two locations. The list describes the food so eloquently, it will take all of your willpower to not buy enough ramen to take home and bathe in.

In other good news, this morning USA Today Travel unveiled their list of America’s Best Vodka Bars where Austin’s Russian House was listed among the “country’s best vodka destinations today with large collections of the spirit, vodka-centric cocktail programs or both.” The piece mentions the more than 100 in-house infused varieties of vodka and highlights some of the bar’s vodka cocktails including their fall twist on the White Russian.

On the other side of the flavor coin, Austin was just voted the worst city in America for Chinese food. Apparently these “researchers” have never been to New Fortune for dim sum, but that’s none of my business (*sips pu-erh tea). The report from Estately, a real estate search site, didn’t exactly have the most compelling methodology, so most of their outcomes can be taken with a grain of salt (or MSG).

Estately Real Estate Search set out to map the restaurant preferences of the 50 largest U.S. cities. Using data from Yelp, we scored each city from 0-300 on the abundance of 18 different restaurant types. The restaurant score for each type of restaurant takes three variables and weights them equally—restaurants per capita, restaurants per square mile, and the percentage of all area restaurants that each type makes up.

So we don’t have a LOT of Chinese food, but we certainly do have some GOOD Chinese food.  Eh. Most people moved here for the tacos, not the Chinese food, so we’re ok with that. Speaking of, we can again find fault with these rankings as DC, Atlanta, and Dallas beat us on the Tex-Mex list (we came in at #4). We did manage to edge out food truck mecca Portland to take the #2 spot for Best City for Food Truck, though (Oakland nabbed the #1 rank).

With all of these amazing options, where are you going for dinner and/or drinks tonight?